The Joker, who is the focal point of Scott Snyder’s “Death of the Family” arc, is barely present in Batman #15. His existence, however, fills every page. Snyder backs off the action of the previous issues to show readers the Joker’s true power in a comic that is pure poetry in its narration and terrifying in its delivery.

Snyder’s Batman is humanized from the initial thought box on the first page. Here, Bruce explains to the readers his thought process when dealing with the Joker. He says, “Tell yourself he’s just a man,” and much of the comic is built around Bruce trying to convince himself of that exact premise. The Joker is made of flesh, bone and blood, and regardless of his psychopathic rages, he can still be defeated the same way. 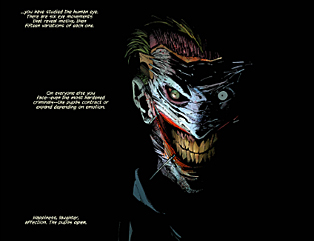 But Snyder goes a step further when he dips into Bruce’s past and tells a story of the Joker potentially figuring out the Batman’s identity, and therefore the identities of all of his companions. So far, the Joker has found a way to get at each member of Batman’s inner circle – from Damian to Jason, Dick, Tim and Barbara – and regardless of the person, the Joker has exploited a personal weakness. Here, we find out how he may have such insider information.

The mind game makes up the majority of the book, and where the comic can be word heavy, the concept makes the story move quickly. Artist Greg Capullo does his best to accommodate the excess of language, but his strongest work is in the action sequences. The opening shot of the Joker, half in the dark, is chilling. And where the final narrative boxes deliver a pretty stellar personal insight, Capullo crafts a dark and dreary visual to match the tone of the comic.

Snyder’s wordiness would be a distraction if not for the intensity of the story, which nicely backs away from the action of the arc to give readers a focus for the final few issues. Snyder’s setting up the finale by building a strange connection between Bruce and the Joker, and the mind games he’s able to play show why he’s truly Batman’s greatest adversary.

This book is an exercise in excellent diction, bordering on literary in its delivery, and those who think comics are for kids should read Batman. It would blow their minds. 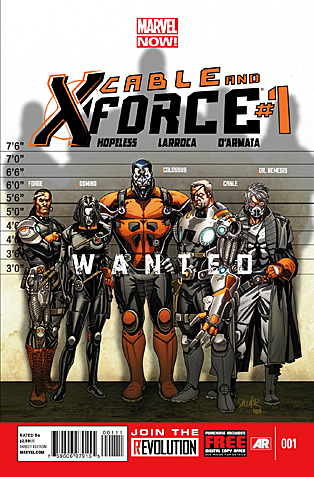 My Cable knowledge is sparse – I know he’s from the future, that he’s the son of Scott Summers and Maddy Pryor, and I know that he’s a violent tough guy. But beyond that, I have little familiarity. So I approached Cable and X-Force blindly, not knowing what to expect. Even in my ignorance, I found the book to be a pretty strong read with a neat premise and solid writing.

Writer Dennis Hopeless uses an old – but good – writing technique. He starts at the end, and then brings us back to the beginning. The opening sequence is interesting, if a bit of a gimmick. But the rest of the comic stands on its own merit, almost to the point that Hopeless should have eschewed the first few pages in favor of starting the comic strong with Hope Summers attempting to adjust to life as a normal citizen.

And character interactions are where Hopeless excels. I have a limited knowledge of Domino, Dr. Nemesis or Forge, but the story fills in enough gaps through personality quirks and sharp dialogue. The final pages are the most intriguing part, when a vision Cable had seems to be coming true, much to the shock of the team members.

The art is a mixture of styles. Salvador Larroca’s drawings at times look like Steve McNiven’s (in his close-ups); yet at other times, his style is compact, yet not altogether neat. The ink lines occasionally give the book a smudged texture so that certain characters lose their clarity. The visualization doesn’t detract from reading the book, but the opaqueness of the characters is noticeable, especially in the darker scenes.

I like what Cable and X-Force has to offer. I’m intrigued by the mystery of Cable’s visions and the role that Hope Summers will play. Plus, the opening pages make for a cool conflict that will eventually materialize. How is still a mystery, but I’m sure we’ll get the answers soon enough. 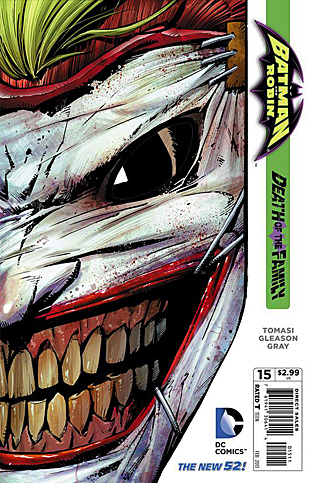 Bannen’s Book of the Week: Peter Tomasi isn’t afraid to make his readers cringe. I showed an earlier issue of Batman and Robin to my wife (when Damian killed Bruce’s nemesis, Nobody), and she commented on the grotesque and violent nature of the comic. After closing the book, she said, “Whoever thinks these are for kids is wrong.” I feel the same way. So now that the Joker is running loose in the Batman universe, we get to see how he deals with Bruce’s demon son in a story that is squirm inducing, visually nauseating and all together brilliant.

Part of the praise should go to Patrick Gleason. His faceless Joker illustrations make the book the horror show it is, and the pacing and storytelling owe a lot to Gleason’s visuals. His distance shots play with light, shadow and point of view. His close-up shots are the stuff of nightmares, particularly when he puts readers inches from – and sometimes inside of – the Joker’s strapped-on face. One panel in particular has the Joker sticking his jaw between a series of bars so that he’s face to face with Damian. While the kid looks undeterred, I could feel my skin crawling.

The visceral nature of the book continues in other aspects. At one point, Joker drops Damian into a bug-filled hole because he thinks that being a “Robin” means that Damian should eat bugs. Flies and maggots are abound in the book, and at all times, Gleason and Tomasi are reminding readers of the disgusting situation in which Damian finds himself.

And while the story is page upon page of the Joker’s crazy dialogue, I loved every line. The Joker is a demented character, and occasionally Tomasi gets a bit theatrical with the delivery, but that’s what makes the Joker so terrifying. Everything is a game to him, and every situation offers him the opportunity to espouse his views, no matter how psychotic they are.

I’ve been continuously impressed with Batman and Robin, but Tomasi writes Damian in particular with admirable zeal. It’s clear that he enjoyed telling this story, as each line spoken by the Joker – regardless of its insanity – is delivered with self-assurance and confidence. And the finale sets up a hell of a climax.

So while both Batman books are great this month, Batman and Robin is the pick of the two. Just don’t eat before reading it.