I have to admit that I know very little about Moon Knight, and therefore issue #1 of his new ongoing series is my first actual introduction to the character. 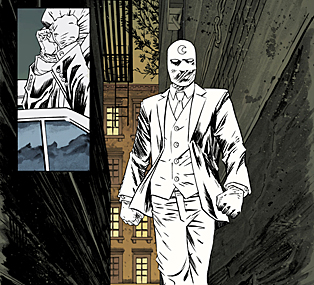 Thank God it was written by Warren Ellis.

Cleverly and succinctly, Warren Ellis gives us everything we need to know about the title character on the first page. The rest of the issue, therefore, is Moon Knight doing what he does best, which, it turns out, is fine detective work and impressive combat.

The character reminds me a bit of Daredevil, but without as much lightheartedness. There’s definitely a brooding layer to Marc Spector. We glimpse some of it through the comic, which focuses on the hero returning to New York and finding the man responsible for a series of brutal slayings.

What we learn, though, is that Moon Knight is like Batman. He’s smart, tactful and has plenty of demons to deal with. Ellis only scratches the surface on this. But he gives enough to whet our appetites for more, particularly on the final pages where Spector returns to his abandoned home only to find something waiting for him, something that hints at an ominous future for the hero.

Artist Declan Shalvey has a unique style, one that relies heavily on mood and pacing – two things he does very well. The comic is pretty dark anyway, given its subject matter, but Shalvey helps Ellis tell Spector’s tale in a series of perfectly structured panels, both for their ability to transmit story and to create atmosphere. The villain’s first appearance is disturbing. Coupled with Jordie Bellaire’s intentionally limited color palette, the comic is more an introduction to a mysterious and gloomy world, and one that is instantly compelling.

For a new reader, Moon Knight is a stellar introduction to the character. I discovered more about the character in the first two pages than I ever had in any cursory readings. I’m hooked. I want to see more Moon Knight. For the uninformed, this is a great introduction, and one that will definitely bring me back again. 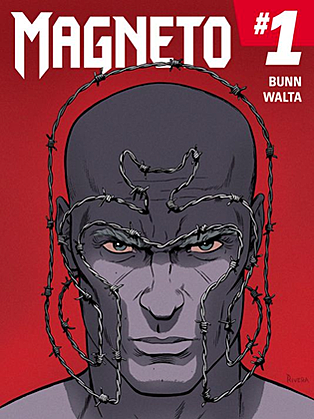 The anti-hero thing is difficult to pull off. The best villains are those we can’t relate to, ones to whom we should never feel a connection. Plus, making a comic about the anti-hero usually leads to stagnation.

Even so, Magneto is an awesome book.

Everybody knows who Magneto is, and everyone knows what he stands for. But Cullen Bunn makes no apologies for the guy. He’s not suddenly seen helping homeless kids, or spending his weekends volunteering at soup kitchens.

He’s a murderer, through and through, and Bunn makes us more like spectators to his madness. But there’s a rationality to Magneto’s violence that lacks in other villains. Sure, the guy cares less about the human race than anyone else, but he justifies his actions as those of a man trying to save his own race.

What’s more shocking about the comic is how little Bunn holds back on the violence. We know, by the end of the issue, that we’re dealing with a man who isn’t afraid to kill others in the pursuit of his goal, and that he will use all means necessary to succeed. We never actually see Magneto kill, but one panel in particular sends a chilling message about his lack of empathy when dealing with people who would harm mutants.

And part of this is translated by Gabriel Hernandez Walta, who uses a dark, shadow-heavy style to communicate the story and the characters. Magneto is every bit imposing and scary in the comic, and when he unleashes, we definitely see him as formidable and terrifying. Two pages in particular outline just how much metal exists in our world, and therefore just how many weapons are at Magneto’s disposal.

I was skeptical on the comic, but I’m glad I took a chance, because it’s a solid introductory issue. Bunn gives us enough background detail to understand the character, and Walta transmits Erik Lehnsherr’s sinister side. They work in unison to give us a great first issue and a sharper insight into a character infamous to many, but known to few. 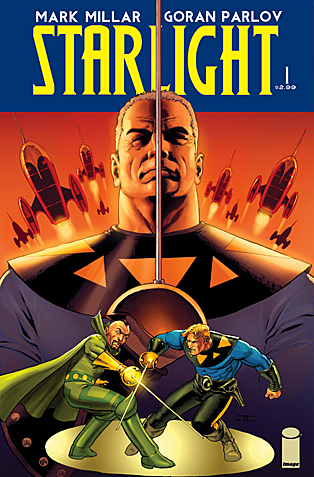 Bannen’s Book of the Week: Starlight is not the kind of comic Mark Millar is known for. It lacks the usual Millar flare – over-the-top violence, percussive swearing and frenetic action. Instead, Starlight takes a more subdued approach to telling the tale of Duke McQueen, a man who traveled through a wormhole, crash landed on another planet and ended up saving a universe.

The concept is certainly Millar through and through, but it’s the way he tells the story – through heartwrenching characterization and Goran Parlov’s immaculate and engaging imagery – that makes Starlight such a great book. More than any other character Mark Millar has created, Duke McQueen is the most relatable, the most likable and the most tragic.

Millar reveals Duke’s tale through a series of flashbacks that neatly fill in the gaps as well as build Duke’s persona. Set in a Flash Gordon-esque world, Starlight has all the amenities of 1950s sci-fi: flashy costumes, glorious spectacle and swashbuckling action. Millar does a great job of contrasting the heroic Duke – the man who saved the planet of Tantalus from the clutches of a ruthless dictator – from his older, defeated self – the man who has buried his wife, been ignored by his children and been vilified by the public.

Part of the strength of the book is in the way Millar builds his hero. There’s nothing special about the guy. He’s a pretty normal husband and father. But the comic doesn’t hammer you over the head with its tonality (think Spider-Man 2, where Sam Raimi spent so much time on making Peter Parker a loser that the effect was tiresome). Here, however, Millar gives dimensionality to his character by keeping Duke’s reactions hushed, and therefore more effective.

Much of the characterization comes through Goran Parlov. Using a few desultory panels, ones that show how lost and alone Duke is, Parlov gives the character palpable depth. Along with colorist Ive Svorcina, the Parlov builds a vibrant, energetic world on Tantalus. Colors radiate in every scene through striking hues and glorious landscapes. Most of the shots of present-day Duke use sepia-like colors, ones that make the character appear rejected and helpless.

In a week of great books, Starlight was the best of the bunch. I found Millar’s restraint compelling, and Goran Pavlov’s art the perfect vehicle for the tale. Count me in on Starlight. I’m completely sold on the series, and you should be, too. I root for Duke, and I hope that he finds the excitement he lost, for his own sake and for ours.

Lobster Johnson: Get the Lobster #2 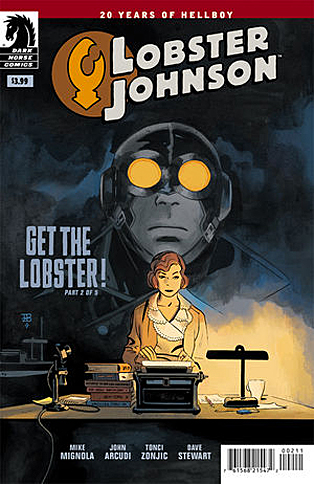 Last issue, Lobster Johnson got into a firefight/grenade fight with two renegade wrestlers-turned-murdering psychopaths. This issue starts with NYPD Police Chief Higgins declaring that the Lobster is Public Enemy Number One.

Lobster Johnson is the 1930s pulp hero from the Hellboy/BPRD universe. Mike Mignola created the Lobster in 1999. He first appeared in a back-up tale in Hellboy: Box Full of Evil #1. The Lobster went on to play a central role in 2001’s Hellboy: The Conqueror Worm. He’s an homage to the pulp and early comic book crime fighters of the 1930s like The Shadow and Batman.

Lobster Johnson: Get the Lobster takes place in the Lobster’s second year. He’s been celebrated by the press and tolerated by the police, but after last issue’s massacre, the city is turning against him. It also doesn’t help that his pal in the press, Cynthia Tynan, may be on the path to discovering LJ’s identity.

This issue amps up the weird quotient when Lobster’s associates realize that the killer wrestlers had ham radios implanted in their heads, making them thralls to an unseen evil.

Meanwhile, Cynthia Tynan continues writing and researching her series about the Lobster and may have come across his origins (LJ may be the were-panther grandson of a legendary pirate). Regardless of whether those are his origins or not, the story adds a layer to the were-beast tales throughout the Hellboy/BPRD-verse.

Mignola and Arcudi’s story is a fun read. But seriously, stay for Tonci Zonjic’s artwork. His storytelling in this issue is killer. The sequence where the Lobster has to flee from the cops bleeds seamlessly into Cynthia’s research scene. I can’t wait to see what else he does on this book!

What are you waiting for, Dear Reader? Get the Lobster!

Too Much Face Time