I’m a bit perplexed by DC’s decision to publish Supergirl’s origin as a Red Lantern after already having shown her turn towards rage in the Green Lantern/Red Lantern flip book. But maybe DC decided to show Kara in all her angry glory, then go back and show how she got there.

Or maybe it was an editorial misstep. Either way, Supergirl #28 doesn’t go far enough in convincing readers that Kara has been pushed to a level of incomprehensible anger – enough for a rage-seeking ring to travel across the galaxy to recruit her. 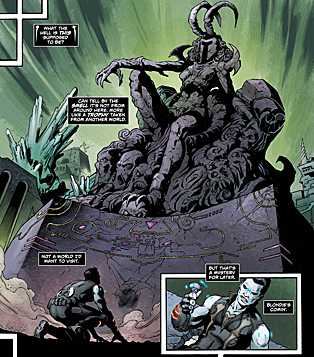 What sparks her anger is when Lobo (the redesigned Lobo, that is) tells her she is meant for bigger things. Then Kara goes nutty and says that she’s tired of people saying they know her and want what’s best for her. In her best imitation of a stressed-out teenager, she goes off the deep end, and her temper tantrum nets her a red ring.

This kind of emotional outburst falls far short of making us believe that Kara is really at her wit’s end. Other members of the Red Lantern corps – like Atrocitus, Bleez, and even Guy Gardner – had much more understandable reasons for their rage. Kara is from the house of El, a group which, throughout history, has shown an ability to overcome adversity and use its power for good.

Especially when it’s Lobo who pushes her over the edge with his constant psychological evaluation. This is a guy who used to ride a space motorcycle, smoke cigars and call everyone “bastich.” Now, he’s dealing out heaps of insightful analysis that get at the true heart of the matter.

The comic also falls short in its artistic presence. Considering the amount of punching and throwing that takes place (and there’s a lot of it), Yildiray Cinar doesn’t get too creative with his illustrations. It’s very standard storytelling with very little dynamism. Cinar has a few interesting point-of-view shots, but much of the action is matter-of-fact and delivered with little fanfare. Supergirl doesn’t hold back in the issue, but the art fails to capture her ferocity.

Maybe DC’s decision to publish this after already having billed her as a Red Lantern was a misstep, or maybe it was an intentional decision. But either way, the comic doesn’t make Kara’s transition believable. I don’t fault DC for the decision – taking characters out of their comfort zones is a brilliant idea that opens up new possibilities for stories.

But believability is also a factor, and if we just don’t believe Kara is capable of this kind of anger, we can’t accept her descent into rage, as interesting as the concept may seem. 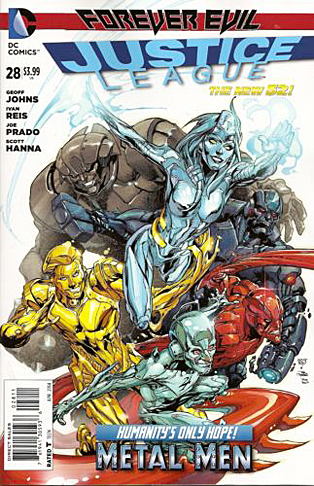 Given the severity of things witnessed during Geoff Johns’ Forever Evil, Justice League #28 is a nice break from the darkness. Johns uses the comic to give readers the origin of the Metal Men, a group of artificially intelligent characters who have been implanted in molds of specific metals. I’m not overly familiar with the Metal Men, but Johns – a big fan of DC’s Silver Age – wants to introduce them in the New 52. He does a decent job of establishing them, even if their introduction is a bit rushed and their personalities a bit heavy-handed.

Johns is clearly making a statement about humanity with Justice League #28. Many of the human characters in the comic lack any sense of it. The Metal Men creator, Will Magnus, has to deal with military pressure to weaponize his creations.

But Will creates heroes who have more of a conscience and sense of heroism than the man who funded their fabrication, surly Secretary of Defense Joseph Devol. And they really are given a level of innocence that offsets the evil the heroes are confronted with by the Crime Syndicate. Their naiveté is a bit over-the-top, but I wouldn’t say it’s not welcome.

Justice League #28 is a welcome diversion. For as much as I’ve been enjoying Forever Evil, the series is starting to drag. At this point, only the Justice League books are providing any kind of connectivity to the storyline. Plus, Johns has whetted my appetite for more Metal Men, and I’m hoping they can provide some light to combat the darkness currently pervading the DCU. 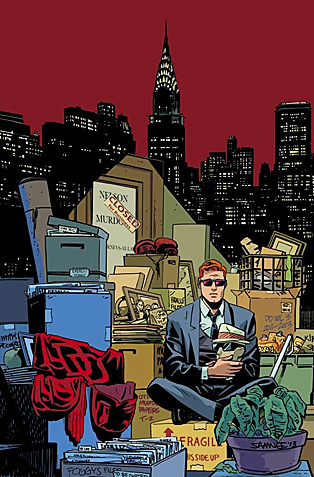 Bannen’s Book of the Week: Mark Waid and Chris Samnee bring their seminal Daredevil series to a close with issue #36. Now, this isn’t the end of the character, because Daredevil is coming back in March with a new #1 and a new setting (San Francisco). Waid and Samnee don’t leave everything in a neat little package at the end of the issue. But even though things aren’t great for the man without fear, the future still looks pretty bright.

Picking up from the cliffhanger last issue, Waid and Samnee cleverly plot out Matt’s plan to reveal himself in order to defeat the Sons of the Serpent. Matt’s resourcefulness is really on display here, as his plan to expose himself results in the Sons of the Serpent having no choice but to expose themselves as well. And where Matt is only one man doing a great thing for a great many people, the Serpents – with their bigotry supplanted at many different levels of government – now find themselves running scared.

It’s a brilliant move, one that shows how Matt is able to sacrifice for a greater cause. This kind of selflessness is what makes him so heroic. Even with all his power, it’s his personality that makes him admirable.

Plus, Samnee and Javier Rodriguez give this final issue some of its most polished visuals. Page after page of the comic is filled with rich inks and vibrant colors. The panel construction is also some of the best, and the visual pacing brings the story to life. The final page is absolutely beautiful and ends the comic on a hopeful note, regardless of the major changes in Matt’s life.

Under Mark Waid, and with the help of Chris Samnee and Javier Rodriguez, Daredevil has been a phenomenally fun read. I’ve loved everything about the series. While I never cared about the character before, I now find myself completely captivated. I’ve said it previously, but it bears repeating: Mark Waid has made a Daredevil fan out of me, and if anyone were to ask me what they should be reading, my first answer will always be Daredevil.

This is the kind of book that makes me glad I read comics and sad that others are missing out on such an entertaining series.