For all the comic relief writer David F. walker gave us in issue #3 of Shaft: Imitation of Life, he takes it back in issue #4. Makes up for it even, with 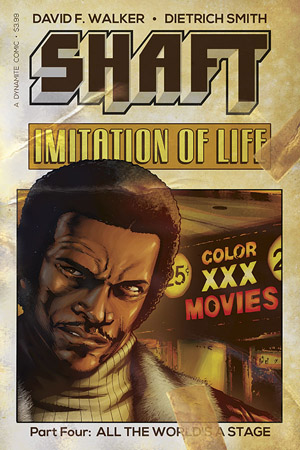 Issue #4 wraps up this chapter of John Shaft’s life. Walker ties things together nicely, something I’ve been concerned about since issue #1, with the Imitation…mini series being given only four issues. I still wish this story had some more breathing room (maybe six issues, like Dynamite’s first Shaft arc, A Complicated Man) but I knew I should have trusted Walker all along. What I really want is more of Walker’s Shaft and the world Walker brings so vividly to life.

Shaft the man continues to muse on the absurdity of life and art, and which one inspires the other. Walker’s Shaft is often deep inside his own head, dissociated at times, but his melancholy seems to have lifted in issue #4, possibly because he had to be on his toes the entire time. Shaft managed to save the missing Mike “Angel Face” Prosser and send him back to his family. This wasn’t too much of a stretch of the story to fit Prosser into the, uh… low budget film world Shaft finds himself wading in. I think Prosser’s happy ending was telegraphed way back in issue #1, but it’s a contrivance I can ignore in service of the greater story. Tito Salazar drops back in to mostly help Shaft. By “mostly help” I mean he doesn’t get Shaft killed. Who knows, maybe the two will team up more in the future? I can picture Shaft sternly shaking his head “no” at me.

Walker leaves plenty of room for more entries into Shaft’s world, and I wonder how Shaft will deal with his new found fame, now that he’s a (reluctant) movie hero. In the Shaft expanded universe (maybe I should copyright that!) I thinkImitation… comes before Walker’s recent novel, Shaft’s Revenge (as Shaft casually mentions a movie made about his life in the novel.) I like that Walker isn’t going linearly through Shaft’s life but is mindful enough to acknowledge what’s happened before.

While I enjoyed Dietrich Smith’s art and Alex Guimaraes’ colors throughout Imitation… I think Walker’s Shaft deserves a visually darker take. I’ll echo sentiments from a previous review of this book and say I’d really like to see cover artist Matthew Clark and cover colorist Vinicius Andrade have a go on the inside pages.

There will be a Shaft-sized hole in my heart now that this mini-series is over. I’m grateful to have been able to read these books in digital free form thanks to the folks at Dynamite, but I do need to say this is a book I enjoyed so much that I’ll definitely buy the trade when it comes out!

I’ve had a passing knowledge of Hanna-Barbera’s action heroes for most of my life. I remember seeing a lot of Space Ghost re-runs and always having 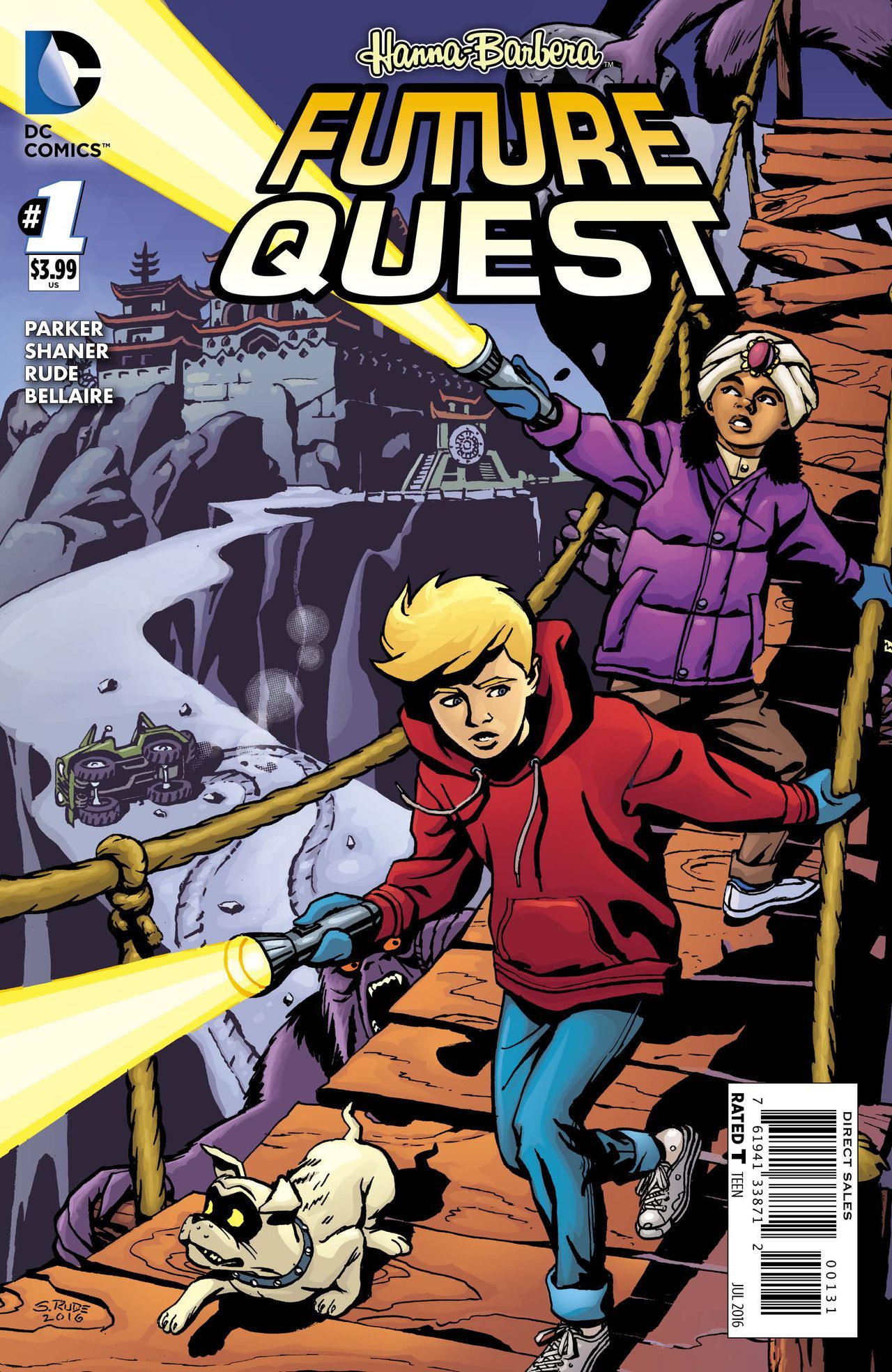 a vague idea of who Jonny Quest was, but other than that, most of my familiarity came from Cartoon Network’s late night reworkings like Space Ghost Coast to Coast, Harvey Birdman: Attorney at Law and Sealab 2021.

I learned more about these characters as I learned more about comics master, Alex Toth. Toth worked as a designer for Hanna-Barbera and created the designs for Space Ghost, Birdman, the Galaxy Trio and more. You also may recognize his work designing the Superfriends. Alex Toth’s legacy looms large over these characters. Evan Shaner, Steve Rude and Jeff Parker made some of my favorite comics (Convergence: SHAZAM, Flash Gordon and The Moth to name a few) and their work on Future Quest # 1 exceeds my expectations!

The story begins with what appears to be the origin of Space Ghost. It’s a prologue that involves a dimensional vortex, a tentacled monster, a whole bunch of dead space cops and one survivor. The action moves to earth, where Jonny Quest and Hadji test rocket packs while searching for strange energy bursts that Jonny’s dad, Dr. Quest, has been tracking. Meanwhile, Dr. Quest meets up with Birdman regarding the strange occurrences and mad scientist Dr Zin’s interest in them.

Shaner and Rude both draw the hell out of their pages. There’s so much Alex Toth love all over this comic. Shaner captures a (presumably pre-Space Ghost) Space Ghost and his deep space apocalypse and transitions to Jonny, Hadji and Race Bannon’s earthbound adventure flawlessly. Rude’s Jonny is awesome too, but the piece that blew me away on his section was his splash page of Birdman taking flight. Seriously everybody, that image needs to be a poster!

From what I understand, shops are having a hard time keeping this one on the shelf. If you see it, snag it. It’s also available digitally (and looking at that art on an iPad screen has to be pretty sweet). Future Quest # 1 is a fine start to the Hanna-Barbera action heroes first comics crossover. We haven’t even seen Frankenstein Jr. yet!

In Black Panther #1, Ta-Nehisi Coates and artist Brian Stelfreeze presented a conflict in Wakanda much greater than the Panther himself and #2 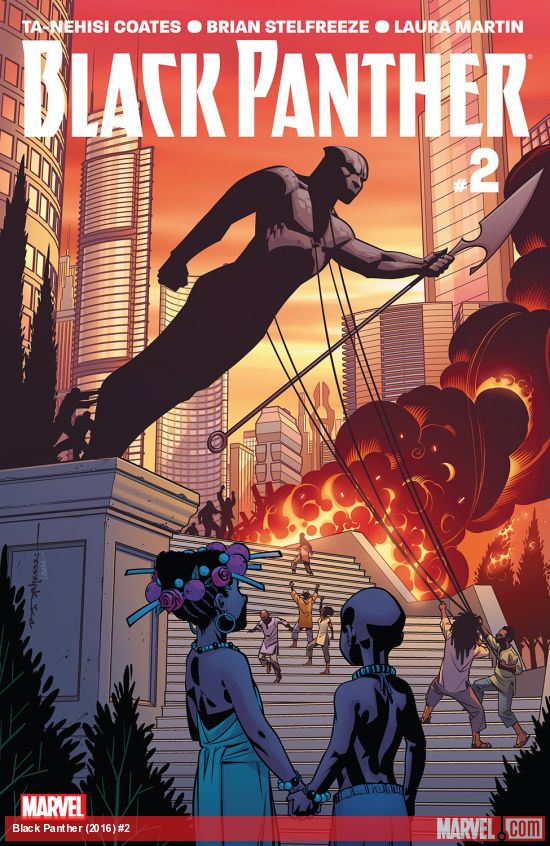 drives that home. T’Challa is nearly rendered powerless so far, even with the creative team showing off a few new abilities the he can tap into. For all his capability in combat, Panther’s bullheaded pursuit of the antagonist is seeming playing right into her hands as the people’s hatred boil with his every act, while the Dora Milaje move to liberate those truly in duress.

Having these two conflicts play out side by side is interesting to see, sharing such different perspective to these skirmishes. On an even more interesting note, perspective is shown to give purpose to those the Panther seeks to bring to heel as well. The dictatorship that is Wakanda has cultivated a poison at its roots and we’re seeing a nation torn to bits as their King scrambles to react while emotionally distraught at the loss of his sister Shuri, whom he seems to think is better fit to rule.

In this 2nd issue, Stelfreeze continues to give us incredible panels. In action, he flips effortlessly from the more brutal Dora Milaje as they infiltrate a prison to the Black Panthers more fluid style, subtle yet incredibly powerful. Overall, Coates, Stelfreeze, and colorist Laura Martin efficiently tap into the spirit of Wakanda and the different tribes. The vibrant colors, distinct looks, and even the treehouse prison are delicious in their delivery.

Wakanda is changing around Black Panther and his thoughts are being pulled in so many directions. The Dora Milaje clearly have a better understanding of the people and a meeting of the minds is needed, though events in the first issue may hinder that gathering. It’ll be very interesting to see the shape of the nation by the end of this run.