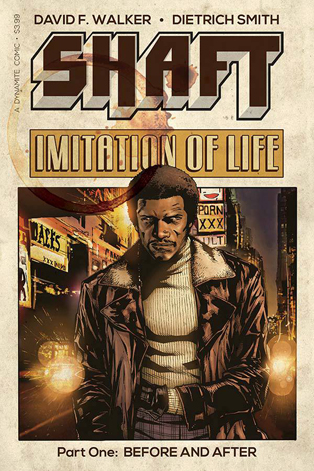 “Most people in this city don’t give a good goddamn about anyone from anywhere.”

Well well well, what do we have here? Another entry in Dynamite’s Shaft series? I’ve been thinking about the man lately, how it’s probably time I run the film series again.

Much like in Dynamite’s first go-round, John Shaft isn’t quite the man yet, the legend he’ll soon enough be. But he’s well on his way. Writer David F. Walker, scribe of the above-mentioned Shaft comic book series (and writer of the very soon to be released novel Shaft’s Revenge) is back at the helm. He again gives us a darker, more introverted John Shaft than we know from the movies, a man still very much haunted by his past. But we see Shaft growing into the wise-ass shit-talker Richard Roundtree made famous. And this time he’s got a mustache.

We’re in Shaft’s head for most of this first of four issues of “Imitation of Life.” Shaft ruminates on life, death, and what’s really real. The question he can’t quite find the answer to is, “once you know you have the power to take someone’s life, are you a human or a monster?”

Shaft is reluctantly on a missing person case, after having laid low for some time. Seems like he’s not digging the P.I. gig too much. A couple from upstate New York are wondering where their son ran off to. Apparently no one else will touch this case, and the parents think it’s because their son is gay. And to further the play on words of the title “Imitation of Life,” advance words say the plot is supposed to revolve around Shaft working as a consultant on a film. Since there’s no mention of said film in issue #1, the mind is left to wonder what kind of film Shaft will be working on, and how our missing troubled boy plays into that.

Walker and artist Dietrich Smith do a good job evoking what the movies have taught us 1970s New York City was like: dark, dangerous and scary to the straight-laced civilians from outside the five boroughs. Racial tensions erupt into violence, and everyone is a little bit homophobic (our man Shaft throws a few choice slurs in. I wonder if he’s in for a life lesson by the end of the series or if that’s just who he is.) In Dynamite’s first Shaft series, Walker showed that he does Shaft creator Ernest Tidyman justice. Smith shines in the flashbacks, and especially on page twelve’s splash. I wish the colors and shadows were darker, though, and at times Shaft is drawn a little too muscular and superhero-esque.

I’m glad Dynamite is continuing their Shaft series, as there’s plenty of room (and plenty of mystery) in John Shaft’s early days for Walker’s existential soul searcher. I especially like the mini-series format as that ensures the stories will stay focused. So put some soulful sounds on the hi-fi and get in the groove, as the action is about to pick up. 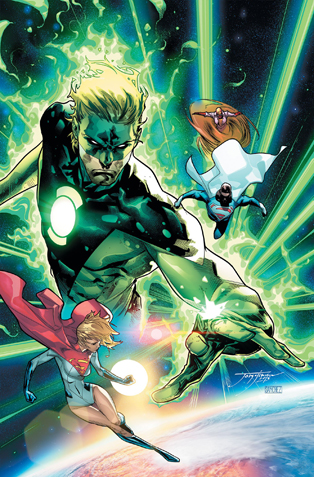 This is the first issue I’ve read of Earth 2 Society. I read this issue entirely on its own merits. Some friends of mine tried it early on and they suggested I pass on the book (even though Jorge Jimenez’s art is gorgeous). This week, I happened to notice Dan Abnett’s name in the credits, so I gave the book a shot. After all, I used to randomly grab comics as a kid and Dan Abnett’s written some amazing comics. I may as well dive in, right?

In the previous Earth 2 series, James Robinson and Nicola Scott recontextualized the Golden Age DC universe. The characters were still born of war however instead of fighting against the axis powers now they were fighting the hordes of Apokalips.It was an interesting take on DC’s Golden Age characters that, sadly Robinson and Scott never got to see through. What followed was a valiant attempt by Tom Taylor and several other talented writers and artists to bring Earth 2 to its destruction and pave the way for DC’s coast-to-coast move event, Convergence. I have a basic understanding as to what Convergence was, so I know this is a planet that was terraformed and the survivors of Earth 2: World’s End are camped on this world.

Abnett and Jimenez are telling a larger story, but having a rudimentary knowledge of the past, I didn’t get lost. That’s a heck of an accomplishment. Issue 9 is  Imagine having to take over a book that has the same level of overlapping plots as a Paul Levitz Legion of Super Heroes or Chris Claremont Uncanny X-Men. It’s a helluva set to juggle but Abnett pulls it off. It helps that Jorge Jimenez’s art is great. He draws awesome superheroes and dynamic splash pages. The art and story flow together from melodrama to bombastic action.

The issue begins as Hawkgirl tries to convince Fury (the daughter of Wonder Woman and Steppenwolf) and her New Amazons to join the world at large. This cuts back and forth between Green Lantern (Alan Scott) and Red Tornado (Lois Lane) starting to draft a new constitution for their new world and Power Girl, Huntress and Sandman trying to stop war from breaking out. There’s also some set up involving Batman (Dick Grayson) planning to stop the new interpretation of the classic Starman villain, the Mist.

There is a lot going on this comic but each main character gets a moment to shine in this issue. Fury trains with her Amazons, Power Girl and Green Lantern battle some giant monsters that crawled out of their new Earth. Superman, Flash and Sarge Steel make a dire discovery regarding the planet’s natural resources. It’s classic superhero melodrama and I want to give # 10 a shot. It’s not All Star Squadron, but it scratches that obscure Golden Age DC itch I get from time to time.