The last time I reviewed Flash Gordon for this column, I said it was “the book Evan Shaner was born to draw.” I stand by that statement even more so in this issue. In Flash Gordon #2, Parker, Shaner and colorist Jordie Bellaire stay on one location: the forest world of Arboria. Here, we get to learn a little more about how Ming runs his empire, how his subjects serve him and how much Ming’s merciless rule gets Flash’s goat.

Last issue, Dale Arden convinced Prince Barin of Arboria that she, Flash and Dr. Zarkov were “royal historians” sent from Mongo. This issue opens with the three of them at a royal feast. Flash and Dale are trying to figure a way out while Zarkov feels he could teach the Arborians a thing or two about wine and fermentation.

Arboria is a world flush with natural forests and all kinds of animals. They have an airship carried by multiple birds. It’s an impressive feat of storytelling and design. We learn a lot about Arboria through both through the art and exposition, including that Arboria is not allowed to have technology. It’s a more natural place, which makes Dale, Flash and Zarkov’s warm reception all the more comforting. 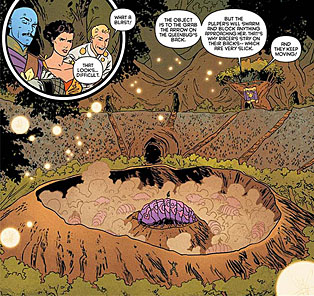 Keeping their cover from last issue, Prince Barin proceeds to show the royal historians around his world. After last issue’s whirlwind around Ming’s empire, it’s nice to see our heroes in one place – a place that winds up teaching the characters and the readers why Mongo’s Emperor is known as Ming the Merciless.

The issue focuses on Flash and Barin. Flash, as Dale puts it, is very competitive. When he sees a game the Arborians set up for his, Dale and Zarkov’s amusement, Flash immediately wants to play. The object is to grab an arrow out of a giant queenbug’s back in a Pulper Pit. Several Arborians try and fail, but as soon as Flash figures the game out, he leaps in and wins it.

Next, Flash and Barin have an archery competition. The game is to fire arrows at small phosphorescent and volatile fruit – the smaller the fruit, the larger the explosion. Spoilers, Flash causes the biggest explosion. It’s a fun scene, building up a potential rivalry between the athlete and the prince. The next scene adds gravitas to both characters, though.

As alluded to earlier in the issue, Arboria is where Ming’s Beast Men are created. Barin takes the royal historians to the Forge in order to show them the fruits of Ming’s conquest. Barin tells Flash that the reason he personally goes to the Forge is because it was his failing that led to Ming ruling over Arboria and he should witness his subjects’ pain. And when Flash sees just what Ming’s engineers do to make the Beast Men, he leaps in to stop it.

Is it foolish? Sure. But Flash is a hero first and foremost. He sees someone in pain and immediately acts to try and stop it. As for Barin, we’re still unclear as to his motives. Will he betray Flash, Dale and Zarkov or will he be an ally? The only things we know are that Barin knows Ming is looking for Flash and now Flash has revealed himself, but Barin also despises Ming for taking over Arboria. The issue ends on a thrilling and ambiguous cliffhanger.

The series is two issues in and it’s proved to be one of the most exciting comics on the stands. Parker’s script paired with Shaner’s art and Bellaire’s colors deliver a bright adventure comic that doesn’t involve people getting their arms ripped off or superheroes acting like jerks. It’s an absolute pleasure to read and I can’t wait for the next issue. 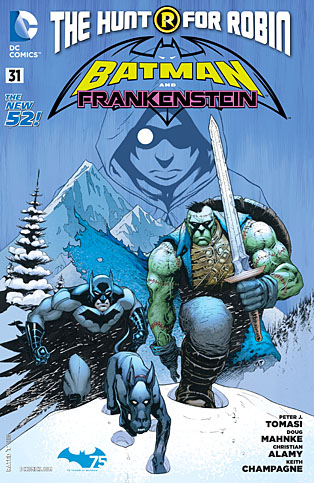 There was a time when the Batman and Robin title would duel monthly with the Batman title for the title of best Bat-book in DCs “New 52.” For me, there were more times when Batman and Robin won – that is, up until Robin’s passing last summer. Since issue 17, we’ve been in a holding pattern, with only a brief glimpse (the five issues or so where Two-Face steps up from second stage) back to the greatness that writer Peter J. Tomasi can bring.

I continue to be skeptical when presented with Batman’s partner for each issue. It makes sense that Batman has to deal with his grief, each member of his extended family and how that grief changes these relationships. But outside of the Two-Face arc, everything else could have been tidier (read: shorter). I’m hoping for a change for the better in the next few months, but since I don’t read solicitations for fear of spoilers, I’m blindly swinging at this faith-in-the-future piñata.

The first two issues of “The Hunt for Robin” arc piqued my interest. The potential for forward movement is there, but I still feel DC editorial is stalling. I’m surprised that I’m okay with Batman’s Justice League cohorts (Aquaman and Wonder Woman) gracing these pages, as I prefer a more insular Bat-verse. Frankenstein, however, is too much, taking things too far to the realm of fantasy for me.

I’m still going back and forth on really buying into Batman’s near-irrational, downright emotion-driven search for closure in Robin’s death, but if anyone can drive the Detective to madness, it’s Ra’s Al Ghul. I’m really hoping Tomasi brings things back to the “real” world soon (as real as a world can be with Lazarus pits), because too much interference from the DC Universe in Batman makes Sal cranky.

I’ve long called for DC to cut off some fat and tighten up their Bat-storylines, but I know this will never happen. I feel that when Tomasi and his creative team are again left alone in their corner of the world, and when the new Robin inevitably makes his/her debut, Batman and Robin will again be my preferred Bat-book. At least until the next universe-shattering crisis. 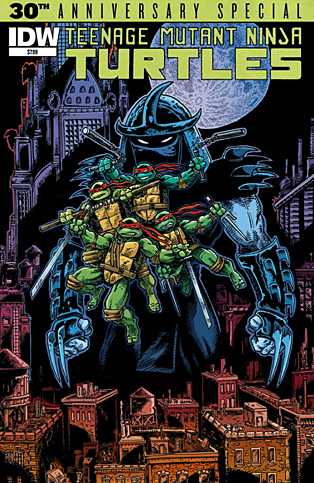 It’s been 30 years of Teenage Mutant Ninja Turtles folks, and here’s the anniversary issue! While reading this issue, I was on a bus heading north on Route 17 near where I grew up in Ridgewood, New Jersey. I would occasionally look up and see the McDonald’s my friends and I would walk to on summer nights, the lot where Tower Records used to be, various diners my friends and I used to drink coffee at until 2 a.m. and the K-Mart my mom and I used to go to regularly in the ’80s and ’90s. It was the K-Mart where I bought issues of TMNT Adventures, the second volume of the Teenage Mutant Ninja Turtles comics that is represented here with a fun tale by the Archie Comics team of Ryan Brown and Stephen Murphy.

In a way, the ride from New York City through New Jersey up to where I went to college in New Paltz, NY was like a 30-year journey in 90 minutes. The nostalgia and good feelings may have skewed my opinion and made me biased, but then again you go into this comic and other anniversary comics looking for these things. If you’ve ever liked the Turtles, from the Eastman and Laird days through the ’90s cartoon until now, give this issue a shot. Either it will bring you back to your favorite TMNT comic book volume(s) or will pique your interest in checking out more issues from these runs. There are stories from the creative teams representing each era, starting with a story written and drawn by Turtles co-creator Kevin Eastman and ending with a story by the IDW Comics team of Tom Waltz, Bobby Curnow and Dan Duncan, who ushered in the current run of TMNT that is great and still going to this day.

While none of these stories are essential or mind blowing, they’re meant to be fun and take you back. Only the tale from the Image Comics team was a bit hard to swallow, due to some weird choices that creative team took with the characters (such as a cybernetic Donatello and one-eyed Raphael). Also, I wasn’t reading Turtles comics during this run in the late ’90s, because apparently I was too busy loitering at 7-Elevens and drinking late-night coffee at various Route 17 diners.

Still, the final line of the last story from the IDW team resonates the most with me as I took my nostalgic bus ride. Raphael thinks, “You know, maybe I have been alone all my life, it’s true. But I’m starting to understand. I don’t have to be.”

Thanks for being around all this time, guys. It’s been great growing up with you. 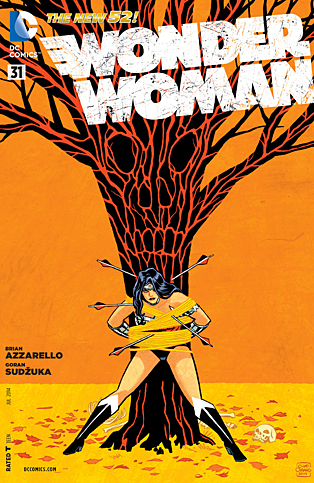 Diana, a.k.a. Wonder Woman, a.k.a. the God of War, is about to go to war with the First Son over Mount Olympus. But she’s not ready just yet. This issue sets the stage for the conflict, tying up some small loose ends and putting the pieces in place for the next phase.

The issue starts with Hermes griping to Dionysus about how marginalized he feels now that the God of War is an Amazon woman. Then in the very next scene we see that Wonder Woman is in fact laying out a new Amazonian philosophy of love and acceptance that includes men as well as women. How’s that for an allegory about typical misperceptions of modern feminism?

But the Amazons have some serious doubts about this whole feminism thing (isolation and misandry have suited them fine for centuries, after all), which results in some nice, if brief, interaction between Diana and her Amazon sister, Dessa. We also see yet another kidnapping of Zeke, the infant demigod whose superpower is apparently being the beanbag in the most high-stakes game of Hot Potato ever played.

One of my minor but persistent issues with Azzarello’s Wonder Woman is that, unless we accept her at her word that she just “loves everyone,” she comes out to be a bit of a Mary Sue. So it’s kind of wonderful that becoming a god and a queen has actually “humanized” her, letting Diana confront challenges in her own character rather than on the battlefield.

The book ends with a few arrivals to Paradise Island, including a whole fleet of the male Amazonian children who had been abandoned at birth and have now apparently come to take up Diana’s offer of repatriation (rematriation?). I’m glad the book is creating a fix of sorts for the controversial twist back in issue #7, in which the Amazons rape and kill men to get pregnant, then exile their male infants. But it does come at the price of Paradise Island no longer being a sanctuary for women, which has been an important part of the location’s history in both Greek myth and DC Comics.

Artist Goran Sudžuka has been Cliff Chiang’s alternate for a few months now, and since the beginning he’s clearly been echoing Chiang’s distinctive style. The layouts are all straightforward square panels, the characters drawn with strong black lines and colored with smooth, solid hues. The female human faces all start to look similar, however, except when they look just a bit distorted, but the former can at least be contributed to consistency of style.

Overall, Wonder Woman #31 may have been a setting-up issue instead of an action issue, but it handled the setting up sincerely and evenly, creating a steady escalation of tension and a smooth transition to the battle just around the corner.

You can follow Jill, Ian and Mike on Twitter @JillScharr, @IanGonzales and @EdwardsDeuce. Talk to them about last week’s comics, or this week’s, for that matter!

Rookie of the Year: It’s Time to Buy Unwinnable