As a new stage of training, I was to go underground with Life in Bunker, a slow-paced simulation with short-lived mole-men infestations and tense structural downturns for action. I was to oversee what was an attempt at a sustainable underground ecosystem, created on the backs of workers who have never seen the surface — and never might without a good leader. I was to be their leader.

There was a lot to be done for us to survive. Roles needed assigning as individuals reached working age: scientists, janitors, cooks, engineers and so on. The labor didn’t cost me anything, but fine-turning my approach was frustration. Workers regulated themselves based on their area of responsibility, taking charge only got me so far. “This is for survival!” I exclaimed with the most commanding voice I could muster in a space of restricted oxygen.

While workers cleared away soil, I scouted ideal locations for mining stations. I scavenged for resources for amenities to improve our quality of life. I tried grappling with scheduling, and developed my own pattern. For the most part I didn’t lose track of important matters as residents became sick or mini-earthquakes occurred. And the workers I assigned to take care of structural maintenance stayed by their posts. But once equipment broke down, I realized my attention had been diverted from long-term planning.

Setting up new devices and processes to sustain our growing population meant taking a close look at our plumbing and wiring systems. Webs of connections were required to achieve operational smoothness. But it was silly of me to think changing my hat was sufficient. I needed a group of helpers to understand the frustrating interface, but was let down by a lack of support. I was equipped with a visual guide, but between the resource displays, material collections and board of statistical inventory, I was still confused in processing the information. Getting to a place where I could hop between these stations while also systematically managing the playing field would have taken months — and our supply levels told us we didn’t have that long!

We considered building a tunnel system between different floors, but it required more visionary leadership than I had in me. The extensive level of below-the-surface management made me feel constricted by the many demands, and it became challenging to develop my own reliable methodology. Low oxygen levels were making the population sluggish, and I never managed to deal with the dwindling resources. Recovering from a drought took time — and, ultimately, the lives of some workers! I was on edge. 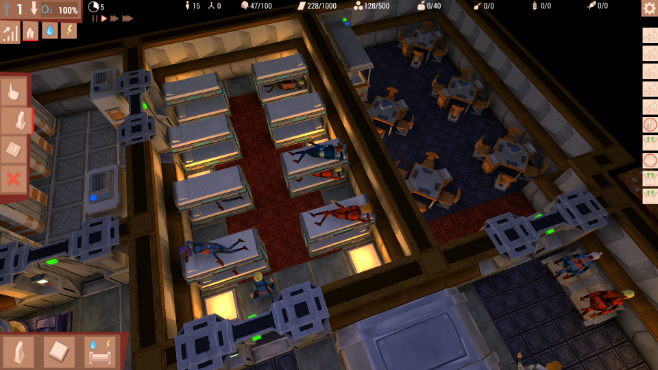 Previous training prepared me for situations where mortality came into play. Giving me aging workers to manage put me out of my comfort zone. Since everyone was on an accelerated timeline, the constant farming of expendable workers was something I should have invested in from the start. But in failing to keep up with the incubation process as interruptions mounted, I got lost in developing a semblance of architecture. Nearly of all my workers were at or on the verge of retirement, leaving no fresh generation to take their place. Redirecting my efforts felt futile by this point because of the time element. People needed to live long enough to be put to work — even though we had no legal precedent to prohibit children from getting involved, just an unwritten rule.

It was grisly seeing the work of my first group rendered moot by a fragile ecosystem. Workers died without their work come to fruition. That was a high price to pay, and it nearly had me disengage from the simulation. Leaders more experienced than me will find this conceptually niche simulation more rewarding than I did. The baseline was just too jarring for me. Life in Bunker does, however, do a good job of weeding out who will survive in the bunker environment. And it appears I’m neither leader nor survivor material.