In the connected world we all live in today, despite the fact that it now makes headlines on a daily basis, hacking is a romanticized concept. The mundane nature of real hacking in the real world – account compromises, denial of service attacks, and the revelation of the inane details of private lives – is nowhere to be found in the world of film and video games.

Instead we are presented with the garish representations of hacking seen in films like Hackers and Swordfish, the absurdly simplistic representations of Blackhat and Watch_Dogs, worlds in which hacking is either a psychedelic cybertrip or a simple button press. The reality of hacking is that it, for the most part, all takes place in shells and terminals. Command lines and amateurishly crafted Linux GUIs. It is exciting only in its retelling and its impact, never in its execution.

Hacknet is a video game released in August 2015 that stands out for being both the antithesis of Hollywood Hacking and yet shockingly entertaining.

Hacknet is described as “an immersive, terminal-based hacking simulator” wherein the person playing
the game – you, yourself, sitting at your computer – is the closest thing to a protagonist. It presents you 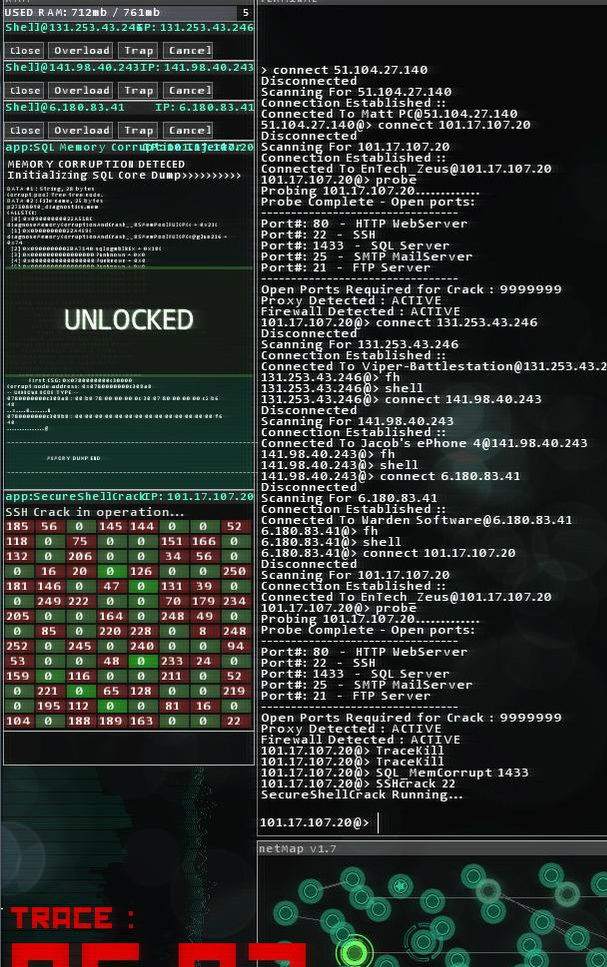 with a Linux-like OS, an electronica soundtrack, and a command prompt. In reality, it isn’t far removed from Kali Linux, a distribution of the open source operating system favored by security professionals and hackers alike.

Most of the game takes place inside that command prompt, where a minimalistic tutorial teaches the player how to list files in a directory, copy and remove files, and run executables. Once the basics are established, the game goes on to provide the player with tidbits of knowledge, such as how to remove traces of your presence on a compromised system, as well as in-game analogues to real-world programs that execute buffer overflow attacks, password cracks, and network mapping.

Against this backdrop, there is a narrative – a hacker has gone missing, presumed dead, and it is up to the player to solve the mystery of the hacker’s disappearance.

This is perhaps the weakest link in Hacknet, but never truly bothersome in the way that narratives can be in video games when executed poorly. As someone intimately familiar with actual penetration testing tools and methods, the most impressive facet of this game is that it manages to turn the grind of real network security and compromise into an entertaining, challenging hacking simulator and puzzle game – all without compromising the fundamentals of hacking.

I would go so far as to recommend Hacknet to anyone interested in network and information security work as a way of gauging their real interest in the field; Hacknet is simply that good.

Hacknet can be found both on the Humble store and Steam.