My dad used to tell me that videogames were a plot from the Japanese to fatten up and dumb down kids that live in America. Being that I was a big fan of The Last Starfighter, however, I believed my videogame playing had a higher purpose.

Can you actually learn something from video games?

Does Dance Dance Revolution teach you how to dance or is it merely a dance simulator? You move your arms, feet and body, but would you actually dance that way? I wouldn’t know, I have two left feet. They say confidence is something that can’t be learned, but most people look ridiculous playing DDR. Is DDR, therefore, a way to circumvent that conventional wisdom?

Or take Wii Fit, a franchise that tells you how overweight you are. Judging from units sold, there is something to be said for the title, but calling it a game seems to be a stretch.

One of the earliest so-called games for the computer was Flight Simulator. The word simulator keeps games in their place on a cold shelf. I think many of the hang-ups people have with videogames come from the words that are used to describe them. Simulator is a word we should have gotten away from the second Jack Thompson called Grand Theft Auto a murder simulator. 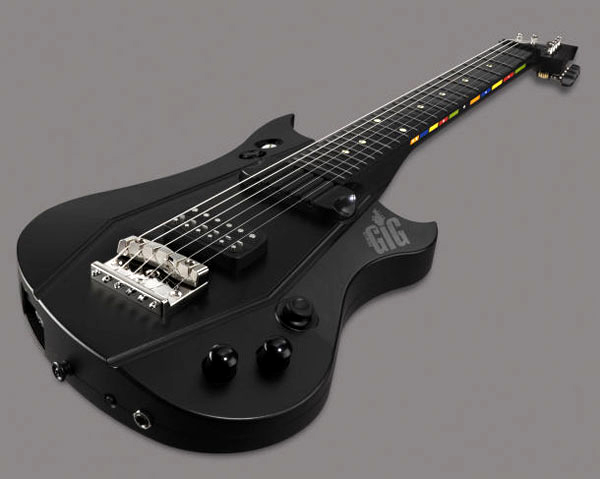 Something good should come out of all of this simulation. Kids that play first person shooters can become soldiers. People that dig flight simulators can go out and get their pilot licenses. People that really get into house management games (the Sims, Farmville) can lead equally boring lives. So people that play Guitar Hero and Rock Band should naturally progress into something more elaborate and take it to the next level. That next level is possibly Power Gig: Rise of the Six String.

Power Gig is a new game coming out with a different take on the band simulators – it uses a real guitar. The fact that you use an actual musical instrument to play the game makes this seem more like a learning tool rather than a game. I for one hope that is so. It seems like the obvious next step for band based rhythm games.

Power Gig: Rise of the SixString is scheduled to come out in October 2010.

Musical Play Without the Peripherals