GDC is not for people.

I understand why it’s difficult to socialize with me. I’m not interested in laying out a catalog of my issues, but I understand. Due to a variety of conditions and disorders, I am a mess in large crowds and unable to maintain eye contact. At a networking convention like GDC, you can imagine how well that goes over.

I don’t begrudge the people who didn’t bother to get to know me. It’s basic design – the more hurdles you put in front of the end user, the less likely they are to jump them. I am a poorly designed menu – a few steps too far to bother when there are other shining examples nearby.

I am more than a menagerie of my anxieties and discomforts, but they travel with me in their own train car out west. They are ever-present presences in my life. I’ve accepted them the way I’ve accepted the other parts of myself that I find abhorrent and unchangeable.

So no. I don’t blame anyone else for the fact that GDC was a miserable experience for me. This was my failing, but I guess I wanted other people to know that they’re not alone.

Because the key thing when the dust clears after GDC, whenever everyone is home recovering from their pox’s and exhaustions, is just how much fun they had. How nice it was to meet their friends and make new ones. How much they adored the experience.

It feels a bit like going to someone else’s church. You can see everyone feel the rapture, can feel the warm glow of their faith but it’s as if it is through a large sheet of glass. You touch the edge of glory. That’s GDC. The faithless in a church of devout piety. There’s moments when you can look in – when someone offers you an orange sherbet push pop at the end of a long day, when you help someone make an event happen, when you play a phenomenal game – and you can feel it cause its so fucking close. It’s right there. But then the glass wedges shut again and you’re outside in the cold. Again. And you can feel everyone else around you doing all the things you wish you could just understand.

Someone I considered a friend laughed at me at GDC, at my propensity for melding into the side of 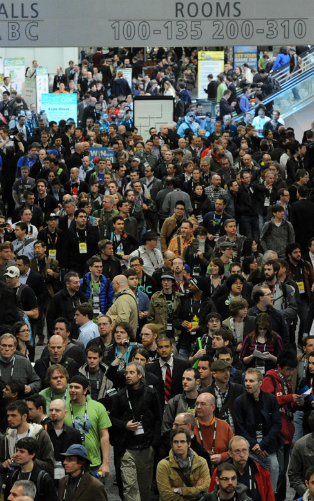 groups and just existing there. I think they meant it well, but I felt like a polyp. I am the unwanted infestation on someone else’s experience. I wish I could participate. I want nothing more than to feel the GDC spirit,  but I can’t. I don’t got that spirit. Faithless.

And it feels wrong to blame people. To blame the friend who kept trying to ditch me when I couldn’t read the signals of their getting exhausted of me. The friend who thought my human interactions were funny rather than clinical. To blame the people who organized a convention around which there is drinking and parties and standing and little else for people who don’t have the capacity for that. There’s potential blame. But I can’t blame them, because I’m the problem. I’m messing up this church, I’m the one who doesn’t belong. No one is responsible for the way I feel except for me.

I don’t know whether or not I’ll go back to GDC. This was my second year. I thought the awfulness had peaked when I had an anxiety attack under a table during year 1, but you know. There’s not really such a thing as rock bottom.

What To Do With All This Girldick
Previous Post