To the editor of The Daily Chthonicle,

I set down these words as a warning for whichever poor soul finds themselves driven by immodest penury and misfortune to accept the function of editor of The Daily Chthonicle, as I did too brief a time ago. Penniless and with my staff immobilized through infirmities both physical and mental, I have been driven to the frayed extremes of my own sanity and shall soon cast myself from the window of my office onto the squalid street below. Do not think me a weakling nor a degenerate for doing so. When you have read these hastily scrawled pages you may guess why it is that I must have the forgiveness of death.

When first I found myself at The Daily Chthonicle, I knew no more than you do the desperate predicament into which I had placed myself, though one might expect me to have been forewarned by the malady of stonework that is our offices, by the goading whistle of the wind, or by the dark palette in which this Town has been painted by the forces that rule it. It seems as if the town itself sucks color from anything that is not sanguinary or putrid.

The initial probings of my reporters proved unsettling, perhaps, but no more. Their stories touched on corruption and blackmail, panic, mania and
nothing more. The Town, however, has a sinister sense for story-telling. Soon I began to hear of phenomena – howling in the night; whispers in the fetid hallways beneath the morgue; furniture marked with teeth. I could only guess at the causes, though I was sufficiently disturbed that I instructed my writers to keep firearms close to hand. I even considered apportioning them with Bibles and crosses, though normally I balk at such superstition. I should have been more cautious still, but when, I reasoned, did a whisper ever hurt a being of guts and bone? 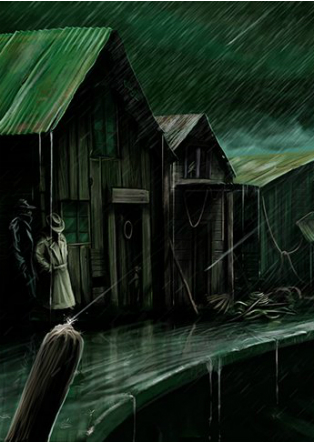 You may be surprised that, at first and despite the despondency of my tone, I was successful. I was rewarded for my heedlessness with photographs of things so hideous that I cannot hope to convey their impact in human language. My reporters brought stories of phantoms and tentacled beasts, constructed as much from barren darkness as from a flesh carcass that could be punctured with iron or steel. In the midst of this terror, I was joyous. I delighted in the profit and the fame that was its inevitable result for The Daily Chthonicle and me as its editor.

Adelaide was my first failure, the victim of some phantom. I called her back to the office, but I do not think she ever truly returned. My memory of her screams have receded now, becoming only one vague part of the horror of this town. She was not the last; on my second night, I sent as many to therapy as out into the Town to work. Most succumbed to some thing at the hotel. The only description I ever had was of a sublime beast, “formless, nightmarish, gargantuan, tentacled and multi-eyed”. I fortified them with whiskey and sent them with weapons, with stimulants, with dogs and dubious men with guns and malformed intentions. I sent them with warnings, but still I sent them, knowing – I admit it to you – that they walked literally into the belly of the beast. And then I ordered them to return to The Daily Chthonicle and tried to stitch what remained back into reporters.

I wonder if I am here at all – if indeed the animated near-cadaver scribbling down these self-admonitions could ever be me; it would all seem a dream, if the visions I experience when I close my eyes were not even farther from endurance than this dismal reality.

Leave before the same afflictions that have overtaken me take you too.

In solemn hope that you may not err as I have,

Your predecessor, (no doubt) deceased.

The Daily Chthonicle can be downloaded for free at Game Jolt. It’s lo-fi and still in development, but it manages to offer a well-rounded newspaper management experience all the same. I’d recommend it. At least more than that guy did.