Aside from a few classic Vampirella Magazine reprints and ogling Joe Quesada’s cover of Vengeance of Vampirella  # 1 (Hey, I was 14), I haven’t read many Vampirella comics. That cover and a few 90s Catwoman comics aside, I missed the boat on the whole “bad girl” comics thing. I was more
interested in the interpersonal relationships of the X-Men, and bootlegs of exploitation movies. I came to Vampi later in life. It was a friend’s praise of Jose Gonzalez’ art that brought me to the comics’ 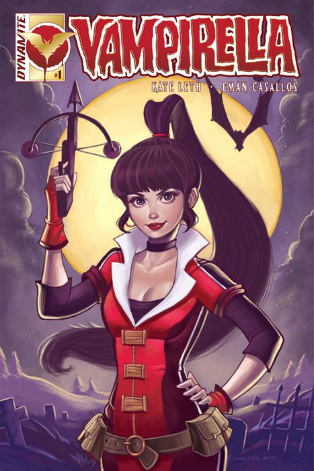 horror cheesecake icon. His work had a finish that felt like a Hammer Films poster transformed into comic book form.

I love Kate Leth’s Kate or Die comics and I’m digging her writing on Patsy Walker, Hellcat. So, armed with the little bit I know of the character, I eagerly dove into Leth and Eman Cassallos’ Vampirella # 1. They spend most of the first issue setting up Vampi’s new status quo. The issue introduces Vampirella’s allies (including a new social media strategist), a new foe as well as a new costume.

The is story is all about moving forward. When they introduce Vampirella, she, her werewolf lover, Tristan, and her butler/chauffeur, Coleridge, are moving to Vampi’s new home in Los Angeles. Of course, she doesn’t even get a night of peace. When she and Tristan retire, a masked assassin crashes through her window. While there is some exposition in the book, Leth and Cassallos spend most of their time on action and building tension. They also own Vampi’s old look while introducing a much more practical ensemble for her demon hunting.

Speaking of the bad guys, the blood queen from Drakulon has a new enemy who seems to prey on Hollywood featured extras. Slade is the casting director from Hell (and I probably mean that literally). She lures a struggling actor and actress to a scene that’s supposed to be for a horror film. By the time the poor saps realized what’s happened, they’re about to be a fugly monster’s breakfast. Slade also sends the aforementioned assassin to Vampirella’s home. It seems Slade’s been killing in Hollywood since 1931, and she doesn’t want any competition from a vampire.

Eman Casallos’ art fits the book’s tone perfectly. Vampirella # 1 feels like a modern Hammer movie – an evolution of those early Vampirella magazine stories. It’s exciting and sexy throughout. It feels like a Vampirella comic, but has a lot more polish than the interiors of the 90’s Harris Comics series.

Vampirella # 1 hits the stands today. I haven’t read much Vampirella, but I’m interested in seeing where Leth and Casallos take her. In the interest of full disclosure, Dynamite did provide Unwinnable with a review copy of this comic.

Superman: The Coming of the Supermen # 1

This comic is bonkers.

Superman: The Coming of the Supermen # 1 feels like a Silver Age Superman tale mixed with continuity from the early and mid 1980s. It’s a loud, bombastic comic with some spectacular art. The story’s still a little shaky, but this is only the first chapter. Neal Adams isn’t afraid to take storytelling risks (See Batman: Odyssey), and Superman is the kind of character Adams’ over-the-top brand of narrative fits perfectly.

Lois Lane narrates a GBS news broadcast throughout the issue. This had me grumbling a bit – not for the early 80s WGBS nod, but for Lois being relegated to an expository roll. Now, a lot happens over the 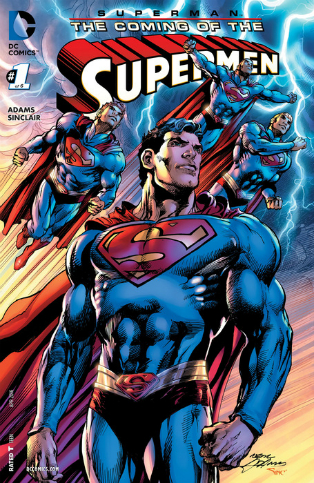 course of this comic; for starters, three Supermen (presumably Kryptonians) show up in Superman costumes and they try to hide their ship. As this happens, Darkseid’s son, Kalibak, shows up with a bunch of Parademons and starts attacking Lex Luthor’s back yard. This is mid 1980s corporate juggernaut Lex, by the way, not Silver Age mad scientist Lex.

Lois switches between Kalibak’s attack, the arrival of the Supermen and the whereabouts of the Superman we all know and love. Where is Superman? He is “somewhere… in the Middle East.” Superman saves a boy named Rafi and his dog from a random missile strike. He then meets a green winged creature that tells the Man o’ Steel he has to take the boy with him. There are some heavy handed, and potentially awkward, politics in the scene, but Adams doesn’t dwell on it, he just keeps on moving.

There’s a lot of Kirby influence in this book beyond the New Gods characters. The Supermen’s spaceship has some Kirby vibe, not to mention the perspective Adams uses on that first page, and during Superman’s mental time travel scene (yes, you read that right – mental time travel). Adams’ art is kinetic – he has more energy than some artists with a third of his experience. Yeah, the story causes a little bit of head scratching, it’s still far more interesting than Dark Knight III.

Superman: The Coming of the Supermen # 1 is such a weird and creative comic that I can’t help but look past its flaws.The story is genuinely interesting and it leaves us with a lot of mystery by the end of the issue. Who are these Supermen? What did Kalibak want from Lexcorp? Who is Rafi? I have no idea where Adams is going, but the book is so far out there that I am in for the ride.