I was excited to read that DC was going to publish a digital first Supergirl comic based on the new CBS TV show. While it’s taken some time for the show to find its feet, Melissa Benoist’s Kara Zor-El was perfect right from the pilot. This is a Supergirl that leaves you wanting more stories to read. Adventures of Supergirl # 1 is a promising start.

The first thing we see Supergirl do in this comic is fight a colorful supervillain – Rampage. Gates captures Benoist’s voice as Supergirl, while Bengal has her physicality down. It’s 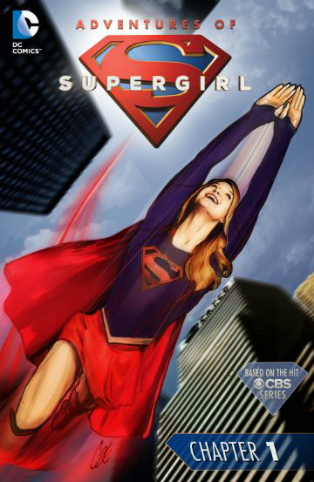 not photorealistic, but rather a fluid interpretation. The downside to the issue is that most of the issue recaps Kara’s origin. The TV show recaps her origin at the beginning of every episode, so spending these pages and panels recapping yet again seems superfluous. It’s a first issue housekeeping sin and I’m looking forward to getting into the meat of Gates and Bengal’s Supergirl stories.

Supergirl made her first appearance in Action Comics #252. It was 1959- the early days of the Silver Age. DC had already reimagined Flash and Green Lantern and wound up creating two of DC’s most iconic superheroes (one of whom also has a pretty successful TV show these days).  Readers and creators were one year away from the Justice League of America and two years away from the Fantastic Four. American superhero comics were having an artistic renaissance and Supergirl is one of the Silver Age’s numerous gifts to pop culture.

Everything about Benoist’s performance is so right. She’s brave, vulnerable and most importantly, kind. She is an evolution of that Otto Binder and Al Plastino creation all those years ago. I’m looking forward to seeing her on the pages again. Truth be told, I’m surprised DC didn’t start this comic during the TV show’s winter break. After all, there aren’t any Supergirl comics currently on the stand; Adventures of Supergirl is it. The comic has an incredible amount of potential. It’s been a few years since I read an optimistic Supergirl comic and I can’t wait to more of this series.