Xenoholics focuses on a group of people who get abducted by aliens, then attend support groups to discuss their xenophobia. I expected a darker story than the one I got, and in the end, I felt a little cheated. Joshua Williamson crafts a playful story that, when paired with Seth Damoose’s campy art stylings, makes for a lighthearted (if uneven) read.

The story opens in medias res with a character holding a gun on trio of aliens. Then, we’re moved back to the present and introduced to Bob. Bob had a wife and children, but after his abduction, his wife moved out and barred him from seeing his children. We’re not given much more than that except for occasional flashbacks Bob has.

Much of the story, however, is about the histories of the group and their idiosyncrasies – including one woman who talks about her family all the time, yet when we meet them, we see they’re mannequins.

The abductees all want some help in returning to a normal life. One of the group members, however, is a reporter, and all he’s looking to do is score a good story for his magazine. But this changes when the aliens create crop circles in Times Square and abduct the support group leader.

I mention the issue being uneven. This is because the comic feels like it should be humorous, and it is, yet there are moments where I didn’t know if I should feel scared for the main character or laugh out loud. At no point does the goal of the issue become clear, and most of the character development is centered on vaudevillian-type banter and visuals. It’s eye-pleasing but not particularly funny.

This issue reminded me a lot of Screamland, but Screamland sets itself up as farce. Xenoholics doesn’t feel like it has an identity. It’s a throwaway comic and not one that is particularly memorable – at least not yet. Four issues from now could be a different story, but I won’t tell you to go out of your way to get a copy of this. 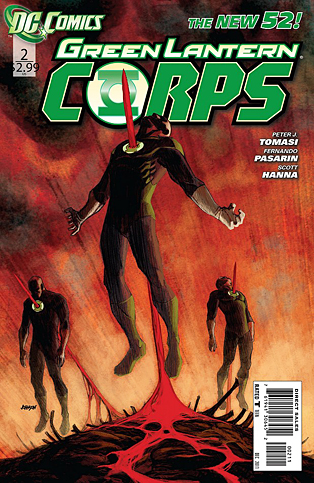 One of a Green Lantern’s greatest strengths is his ability to harness willpower. Every Lantern has it, and it is the touchstone of their constructs. The villains in this issue, however, are attempting to rob the Green Lanterns of their willpower, thereby making them harmless foes. And while I think the concept is cool and the visuals stunning, the story is a bit chaotic, and the villain dialogue feels like it has a home in a James Bond film. It’s not a bad read by any means, but I expect much more out of my Green Lantern Corps.

Let me preface my criticism. I love that Peter Tomasi is writing this series, and I think one of the strengths of the Green Lantern universe is its myriad of characters. Guy Gardner has really made a resurgence in the past few years (as have Kyle Rayner and John Stewart), yet each GL writer has made it his purpose to define the characters in terms of their importance in the Corps. This issue, however, strays far from that theme and goes more for action.

Much of the issue takes place on an alien planet that is being harvested for its resources. The enemies, a group of ninja-type aliens, have an ability to fight the green willpower. The panel construction, however, is hectic, and I had a hard time understanding just what it was the Lanterns were trying to do (if you ask me, I still can’t really articulate it). They somewhat succeed, but in the end, more trouble is a-brewin’ as a group of these ninja-like things descends upon them in the final panel.

There are hints of a darker force, and this is what makes the story interesting. We never see the main villain, but he’s friggin’ creepy. (All Fernando Pasarin draws of him are eyes and teeth.) He feels like an epic villain and one that could make for great stories for years. But it all depends on how he’s handled. If he’s meant to be a mainstay, Tomasi has laid fantastic groundwork. But if he’s a villain of the week, I’ll be pretty pissed because there’s a lot to his aura as evil incarnate. And if he has the ability to drain the Lanterns of their willpower, they’re in for a world of trouble.

I love my Green Lantern books, and Green Lantern Corps is no exception. This story has the elements handy to make it a classic read, but the editing needs to be precise. The eye can only take so much before it shuts down, and in a world populated by space police and alien planets, this can happen abnormally quickly. This isn’t a great issue, but it’s got the seeds in place to make for a pretty epic arc. Hopefully, this comes together in the end.

I will gladly eat my words. 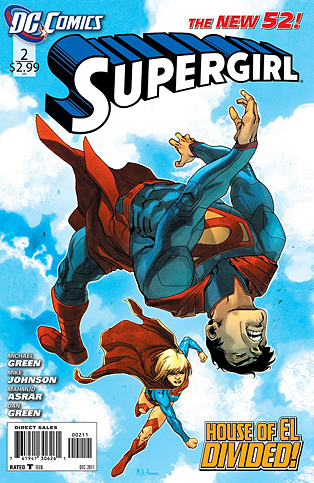 Bannen’s Book of the Week: For the second time, Supergirl has exceeded my expectations. Picking up immediately where the first issue left off, this issue treats readers to a glorious throwdown between Kara and Kal, plus a bit more about Kara’s past is revealed. Toss in some red kryptonite, and we got ourselves a kick-ass story that helps this book become one of the best relaunches of the New 52.

I don’t know much about the old (pre-reboot) Kara Zor-El. Green and Johnson don’t give us their full take yet, but they do offer some clues. Kara is about 17 years older than Kal and about to take the trials that will make her an adult, allowing her to wear the symbol of the House of El.

The last time she saw Kal, however, he was only a baby. This event occurred three days prior to the beginning of the issue, yet now he stands/floats before her a grown man. The mystery deepens.

I have no clue what’s going on with Krypton, but I’m intrigued as hell. How did Kara stay in stasis for so long? How did she escape? Why were the men chasing her more interested in her capsule than in her? These answers aren’t given yet, but I’m sure they’ll be satisfactory when they’re presented.

One of the things that helped the first issue succeed so well was the action. Supergirl #2 has just as much, but it’s more focused – Kal versus Kara – and the results are pretty damn cool (we also learn that one of the robot-people who attacked Kara ended up somewhere in Mongolia – she’s in Siberia). Kara is still learning her powers, so after she tosses Kal through a forest, she proceeds to beat his face until she starts to see through him. Her X-ray vision, we learn, is not yet defined, and this is affecting her ability to use it properly.

What I enjoyed most about all the action sequences in the book is that they all show how powerful Kara is. At one point, Kara and Kal end up in China, and she punches Kal through curves in the Great Wall. Every time he tries to help her, she fires off another barrage of punches and kicks, and while I think Supes could beat the piss out of her if he tried, Green and Johnson do a nice job of portraying Kal-El as a sympathetic ear.

Whereas Morrison went right for the gusto with his Superman writing, Green and Johnson seem intent on keeping Superman’s powers latent until they’re unleashed. In this issue Clark radiates power – even though he doesn’t use any of it. He doesn’t throw a single punch. But if he wanted to, I’m sure he could pound Kara through the hole she crawled out of and send her unconscious body floating out into space.

Unlike in Morrison’s brash Superman, here we get a more subdued, calculating and pragmatic hero. He’s more interested in getting answers than in trying to intimidate. There’s something very earnest about this Superman that makes him such a fun character to read. The book is told through Kara’s viewpoint, but Kal plays as vital a role. And this make me want Green and Johnson to take over all the Superman writing duties.

Lastly, we’re reintroduced to the red kryptonite. Older versions of red kryptonite affect Superman in different ways, and these effects change with every new piece of red kryptonite. But with a new DC, no one really knows how this will impact our heroes. Either way, I’m sold. Green and Johnson have done a great job on making Supergirl relevant. They’ve given readers two solid stories. The issue never feels bogged down by its dialogue, and it manages to keep an even pace of action and exposition. I can’t say enough good things about this book, so just go read it already!