Vibe is the kind of comic you pick up due to its light-hearted tone and everyman hero in Cisco Ramon. Cisco is the kind of person most people would become if they were just given superpowers – unsure of the ability, but sure of the desire to help. DC is currently working on building the character enough to see his importance in this summer’s “Trinity War.” But before he becomes a main cog in the DC wheel, we’re given the inkling of the hero he could become in issue #3 of Vibe. 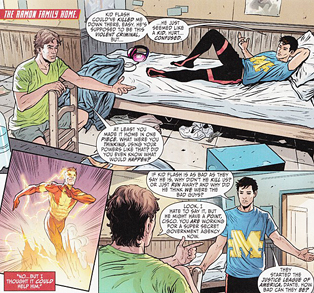 The fight with Kid Flash is obviously a teaser for Vibe’s eventual interaction with the Flash (as seen in Geoff Johns’ Justice League of America). Their scenes together raise more questions than answers, but in a way that would draw the reader back for more. Cisco continues to be likable, and he clearly is trying to understand the role of a hero, particularly one who’s been indoctrinated so quickly.

But I like the way Sterling Gates continuously reminds us of Cisco’s naiveté, as the character is charming enough to withstand it. The dialogue can be a bit tedious, though, and Cisco’s brother (who does nothing but sit around and complain) is becoming a bit of a drag on the series.

Still, Gates makes up for this with some cool moments between Vibe and Kid Flash, as well as giving the comic a great climax involving Darkseid’s daughter. The final page is a strong enough hook for the next issue, but I’d hate to see the writers amp up the danger and drama so quickly and end up burning out the character before he’s had a chance to fully form.

Additionally, the comic has some great, if uneven visuals courtesy of Pete Woods and Fabian Neves. In certain shots, characters are rendered with sharp detail, but in others they appear blocky or muddled. The inking varies as well, sometimes thickly emphasizing the outlines, at other times no greater than a thin yet undefined line. Kid Flash, particularly, suffers from this. Granted, this is a minor occurrence, but the shift in art is noticeable when it happens.

I’m a fan of Vibe even though I didn’t think I’d be. The book has a good premise and an engaging lead. Plus, DC has been able to shy away from the stereotype that killed the character in his initial appearance. Luckily, Cisco has more going for him than just being a walking cliché, and I hope the writers can keep the character interesting in his future beyond “Trinity War.” 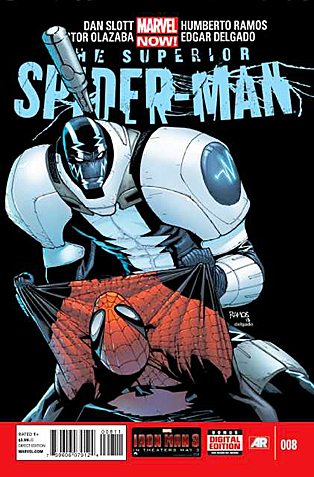 When we last left Spider-Man, he was being arrested by the Avengers in an attempt to show that he wasn’t the old web head they had come to know and love. Slott teased a pretty awesome fight that might finally show that Peter Parker is not in Peter Parker’s body.

But rather than delving more into the battle, and really utilizing Humberto Ramos as an artist, Dan Slott wraps up the major cliffhanger from last month’s issue too quickly for it to have any lasting impact, and instead he moves on to a saccharine story about Otto being a hero.

My problem with this is that Slott squandered a great opportunity to pen an issue that was full of action, humor and revelation. Otto’s knowledge of Peter’s spirit existence is finally touched upon, but not given enough of a strong landing to have a major impact. In fact, it’s given only a few panels on the final page, not going far enough to give the comic the climactic punch it needs.

Furthermore, the villain with a heart of gold trope is miles away from Otto throwing the Vulture into a spotlight, or even shooting Massacre in the head. These incidents set a tonal expectation that Slott has veered away from, but for what purpose?

The main positive of the issue, however, is Humberto Ramos, who crafts some of his best work to date. The Avengers battle, while short, is sleek and clear. The same goes from Ock’s throwdown with Cardiac and the soupy, watery texture of Peter’s spirit. In both instances, Ramos’s work is sharp and detailed. Victor Olazaba should be praised as well for his fine, lush inks and Edgar Delgado brings the imagery to life with his vivid colorization.

The Superior Spider-Man is a visual home run. Unfortunately, its story holds it back from being great, even as it introduces the concept of Peter’s existence and Ock’s knowledge of his being. I only hope Slott can get the comic back on track in the next issue.

To be fair, every issue can’t be great. I have faith in Slott, as he has written some of the best Spider-Man stories to date, so I can’t really complain. A minor stumble every now and then can be forgiven, so I don’t see this being enough to derail the entire series.

Still, I really wanted to see an Otto/Wolverine fight. 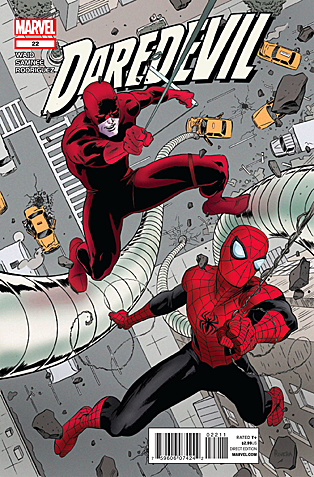 Bannen’s Book of the Week: Lately, Matt Murdock has been put through the emotional ringer. For a while he thought he was going crazy, then he found out his best friend was diagnosed with cancer and now he’s battling a villain who seems intent on destroying his life by creating variations of him – other people who have been blinded by radioactive waste.

In this issue, Daredevil battles a villain known as Ikari, a man who can keep up with Matt and who promises him that he will die – but only when Ikari is finally done with him. Waid and Samnee craft a gripping, action-heavy tale that gets us into Matt’s head so we can see his tactical prowess, in addition to his inherited skills.

Page after page, the writers build the tension through terse word boxes and tight panels that build upon one another in a fluid and linear fashion. Through this manner of storytelling, Waid and Samnee are able to humanize Matt and his heroic persona. They make his fear palpable, and just when you think Matt’s finally won, they pull the rug out from under us and create a volatile situation that is miles away from safe.

They make you fear for Daredevil’s life.

Samnee also provides the art in the book, and in conjunction with colorist Javier Rodriguez, creates a myriad of crisp and exciting visuals. Samnee uses panel construction with aplomb, shifting smoothly between moments with a unique and impressive style, while Rodriguez adds layers of detail with his sharp colors and impressive shadows. He captures the darkened mood of the book and contributes to Matt’s situation by giving a tonal weight to Matt’s predicament.

With continuously gripping stories, strong characterization and great art, it’s easy to see that Daredevil should be a given on your pull list every month. Waid and Samnee have found a way to keep the series fresh, giving Daredevil varied and interesting challenges each month while reaffirming the eliteness of the character in the Marvel pantheon.

This comic is a surefire win every month, and a comic definitely worth your time and money.