Every month, Team Unwinnable puts together short lists of recommended music, books and games. These lists originally appeared in Unwinnable Monthly Seventy-Nine. If you enjoy what you read, please buy the issue or subscribe.

“Desire’s Magic Theater,” by Purson
“London Bridge,” by TWENTY88
“El Condor Pasa (If I Could),” by Simon & Garfunkel
“Burn the Witch,” by Radiohead
“Angels (feat. Saba)” by Chance the Rapper
“King Kong Song,” by ABBA
“Asshole,” by Tom Petty
“I Wanna Boi,” by PWR BTTM
“Superhero,” by Faith No More
“Midnight Special Theme,” by David Wingo
“Tougher Colder Killer,” by El-P
“Nautilus,” by Anna Meredith
“We Will Rock You (live),” by Queen
“Burnin’ for You,” by Blue Öyster Cult
“Pushin’ Forward Back,” Temple of the Dog
“Kiddy Pool Dreams,” by Pinkshinyultrablast

Put It In the Book!: A Half-Century of Mets Mania, Howie Rose
I Know What I’m Doing and Other Lies I Tell Myself, by Jen Kirkman
Turn Right at Machu Picchu, by Mark Adams
The Name of the Rose, by Umberto Eco
Modern Man in Search of a Soul, by Carl Jung
Lovecraft Country, by Matt Ruff
Murder in the Front Row, by Harald Oimoen & Brian Lew
The Wise Man’s Fear, by Patrick Rothfuss
Patience, by Dan Clowes
Damnation Alley, by Roger Zelazny
This Will Make You Smarter, by John Brockman
Heart Shaped Box, by Joe Hill
The Passage, by Justin Cronin
The Shining, by Stephen King

Dishonored – Stu Horvath
I am replaying Dishonored because I love it, but the more I play, the less I find that to be true. That is weird, no? Which is it: is Dishonored not very good, or have I been replaced by a pod person?

Evoland II – Matt Sayer
How did I hear nothing about this? Given all the fuss over Undertale, I would have expected similar praise for Evoland II, since it does the humorous, referential RPG approach even better.

Final Fantasy 9 – Jeremiah Cheney
The Steam remake is great, the character models look like figures now, not lumps of geometry!

Battlefleet Gothic: Armada – Jason McMaster
Every now and then, a game comes along that completely surprises me. When I saw the name Battlefleet Gothic: Armada, I thought, “Oh boy, someone is ripping of Sins of a Solar Empire,” but I was wrong. While it may be set in space, this game plays more like a slow-paced ship combat sim during its action moments and a paired down 4X or a strategy board game during its star chart segments. After battle, you can upgrade your ships and crew while fighting off the incursion of Chaos, Ork and Eldar. If the new Total War: Warhammer turns out well, then 2016 is going to be a great year for Games Workshop fans.

Dark Souls 3 (AKA From Software’s Greatest Hits Collection) – Corey Milne
I might be on my second playthrough, but it is still not as good as Demon’s Souls.

Exploding Kittens – Don Becker
Usually when a game kills my phone battery to this extent I get upset, but this one is worth the $2.

Rocket League Hoops Mode – Joe Demartino
With the new hoops mode, Psyonix is on the hottest streak of any developer I’ve ever seen.

Happy Wheels – Ken Lucas
A side scrolling, rag doll physics puzzle racer akin to Trials with a heavy dose of disembowelment. I’m playing on the iPad but it’s also available in a 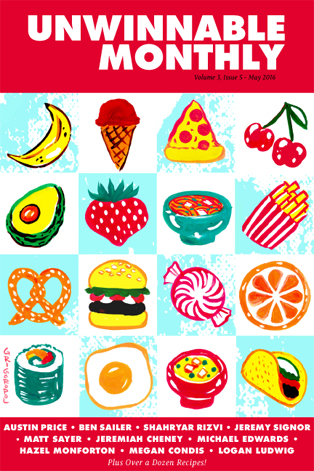 Warbits – Gus Mastrapa
A blatant Advance Wars clone that can only leave you thinking, “Why didn’t Nintendo do this on the iPhone ten years ago?”

Miitomo – Melissa King
Here are my recommendations for the ultimate Miitomo experience:
•Use the voice sliders to make your Mii sound like an eldritch abomination as much as possible
•Answer as many questions as you can with existential dread and cynicism
•Use Miifoto to stick your face on a meme
•Use Miifoto to stick your favorite cutie and/or best friend’s face on a meme and send it to them as a token of your affection
•Check the store’s daily items for speedos and purchase said speedos
•Take a Miifoto in your new speedo

Axes and Acres – Jose Cardoso
This game is not for those who swear by accessibility; underneath the scaled-back setup lies complex strategy that will keep you thinking. It’s in the style of a turn-based board game, with gameplay revolving around structure building, resource collection, and home defense. The biggest obstacle is understanding how dice work, as they represent individual units and also function as an action mechanism. Although my first session started off slowly, once I made sense of the system, I was hooked. If you patiently persist despite the initial confusion, you’ll find Axes and Acres to be both a rewarding and addictive experience.