The first Transformer toy I ever owned – or encountered, really – was a tiny rendition of Bumblebee, one of the early figures from the original run of the show. It was a little smaller than a Matchbox car but I didn’t care. I could decide to play with a car or a robot whenever I wanted, and I took it with me everywhere.

It opened up a new world to me and I’m not talking about Cybertron. For almost two decades I was always on the lookout for Transformers, but I wasn’t an avid collector by any stretch of the imagination. I would see one that looked neat and ask my parents for it. When I got older I’d buy them for myself. I never cared about completing entire lines or worried about preserving the packaging, though.

I never regretted taking them out of the box and playing with them in the slightest. The amount of enjoyment these transforming action figures gave me over the years more than makes up for how much they might sell on eBay these days. Besides, I never bothered with the stickers and I always lost the weapons.

I fell out of the whole Transformers thing around the time I was in college, both as a by-product of finally having to think about saving money and because the stuff Hasbro was releasing around that time didn’t interest me. Except for the Alternators. That was a fantastic line and Mustang Grimlock is still one of my favorites in my collection.

The last time I was really into Transformers was at least 10 years ago. In the intervening years I did occasionally grab one off the shelf when wandering through a toy store because I thought it looked cool – the Transformers Animated series was a particular high point – but for the most part, I never bothered looking for them. The designs didn’t appeal to me, the plastic often appeared to be low quality and I knew they’d probably just sit on a shelf until I got tired of them.

A couple of months ago, all of that changed when I was wandering through a store and noticed Powerglide from the still current Combiner Wars 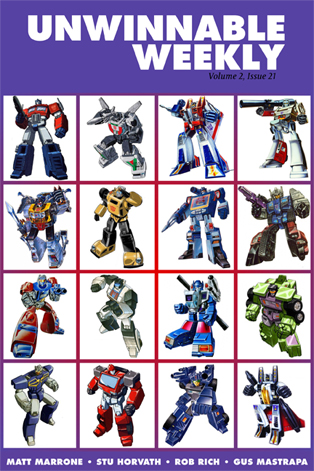 series. Now, the original Powerglide was another figure I carried around all the time when I was little, so I couldn’t pass up the opportunity to get my hands on an updated version. I wasn’t disappointed either; he’s small but neat, with a design that harkens back to the original figure, but with far better proportions and details.

A few weeks later I found Combiner Wars’ Warpath and the nostalgia spasms took over again, only this time I wasn’t as impressed. I mean, Warpath is a decent figure but having his cannon on his arm just feels wrong. This prompted me to look into figure reviews on YouTube, which in turn led to me rooting around in some massive video back catalogs from a handful of different reviewers. I found more than I’d expected. A lot more.

You’ve been reading an excerpt from Unwinnable Monthly Issue 73.