Arlo, The Good Dinosaur’s main character, is a young apatosaur who’s pushed to his limits when he has to find his way home after being separated from his family. In the film, he falls down cliffsides, has a bad trip from some psychedelic fruit, careens down a torrential river and generally gets the living crap beaten out of him. But even when his journey seems entirely futile and his goals completely out of reach, he marches on, barely held aloft by his knobby little legs.

If you were one of the many people who saw The Good Dinosaur recently and thought it was a charming, if not somewhat conventional coming-of-age
story about a plucky young dinosaur overcoming his fears, Ken Ham probably doesn’t like you.

That’s because Ken Ham – a Christian fundamentalist and the CEO of Answers in Genesis, the organization that runs The Creation Museum – sees the film as taking an anti-creationist view of the world. According to his site, The Good Dinosaur is “evolutionary indoctrination” because while it depicts a world in which humans and dinosaurs lived side-by-side, it portrays that scenario as fictional alternate universe. Ham, however, believes that just a few thousand years ago, humans and dinosaurs really did share the earth, a view which he claims is corroborated by “solid science.”

In February of 2014, the last time his name was in the headlines, Ham had a televised debate with Bill Nye about the viability of the theory of creationism. The scientific community was split on whether or not the debate was worthwhile – some thought Nye was taking a brave and important stance against those who threaten the scientific literacy of our country by choosing to ignore mountains of scientific evidence, but many others thought that participating in the debate at all legitimized Ham’s viewpoints as something worth having a discussion about. (If you have yet to see it, please check out this segment from John Oliver’s show about misrepresenting the climate change “debate” to better understand this criticism leveled at Nye.) 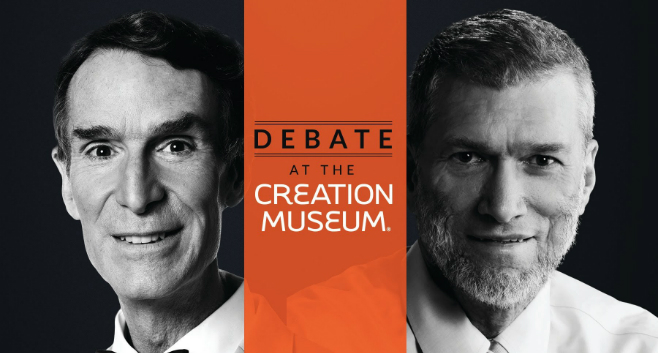 Many claim Bill Nye’s quest to change the minds of the staunchest deniers of the basics of science is utterly futile. But despite a lack of support from many of his peers, he marched head on into The Creation Museum, where lies the heart of the viewpoint he so vehemently disputes. And if Ham’s recent comments on the evils of The Good Dinosaur are any indication, it seems unlikely that last year’s debate did anything to change his mind.

But in The Good Dinosaur, what kept Arlo pushing forward, even in the face of great opposition, was a mantra passed down to him by his father: “You have to get through your fear to see the beauty on the other side.” Nye seems to be operating under a similar principle, actively combatting those who stand in the way of scientific literacy in the 21st century, a frightening proposition indeed. Rather than be crippled with fear at those who oppose him, he charges into the fray, attempting to facilitate change amongst those who hold creationist beliefs at their very core.

As is customary in any Disney film, Arlo makes it home to his happy ending. I hope the future holds the same for Nye in his quest to combat those who stand in the way of scientific progress. While his journey seems utterly futile now, I really hope he gets the chance to the see the beauty on the other side.