How many ways can I bitch about spending $4? You’d be surprised. Let me count the ways…

Not to beat this dead horse again, but yeah, to do exactly that: cost is very much a consideration when buying my weekly comic books. I love to support my local store, I want to check out more titles, but with individual issues costing $4 each more often than not, I have to choose wisely. With trade paperback collections coming 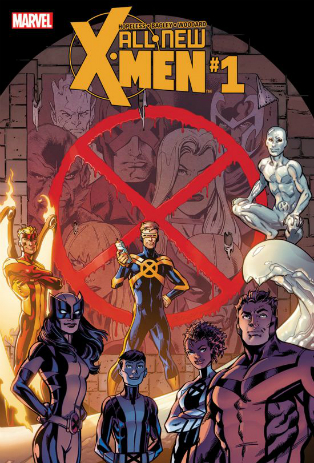 at the accelerated rate they have been for the past few years, sometimes it’s more reasonable for me to wait for the collection. But this touches at the core of many collectors/completists/what-have-yous: can I wait four or six months to find out what’s going on in my various favorite universes?

These thoughts are very much at the fore as the new X-Men titles roll out. I want to give each of the titles a chance, but I can’t reasonably commit to buying every title every month at this time. More so than my complaints about cost is my concern about the quality-slash-fun of each title. I’m already grumpy that Extraordinary X-Men seems to be on a two week release schedule, and with All-New X-Men not impressing me on first read, I’m reconsidering my initial plan to buy the first several issues of each title (whatever amount would go into the first trade) then deciding if I will continue monthly from there, check in when trades drop, or abandon a title.

Let me interrupt my tirade to say what I do like about All-New X-Men #1 so far: I like that the time-displaced X-Men have a place in the modern world; I think that humans being more prejudiced than ever against mutants has strong, long term story potential; and I like that Scott Summers comes face-to-face with the “Ghosts” gang (as much as I think Summers is a ninny.) Unlike over in Extraordinary… , All New… doesn’t jump into yet another universe-altering crisis (despite Summers’ outing himself to the “Ghosts.”) All of these sub-plots are good building ground.

But back to my complaints: I really don’t care for the style or color of this issue; everything is too bright. I really enjoyed Stuart Immonen’s and Chris Bachalo’s respective X-work, but something about Mark Bagley’s art is too cartoon-y (though I must say I like his expressive faces.) I was put off by some of the lettering as well, specifically in Summers thought balloons. I got a very “young adult fiction” feel from it. If these points seem petty to anyone, I hear you. Can an adult really complain this much about a book that really is made for a younger crowd?

Alright, so some venting of the spleen has cooled me a bit and I can focus again on what good and interesting stories await our X-gangs. But I reserve the right to fly off the handle at any moment and corner someone to listen to my rants. I’ll happily listen to your complaints as well.

On the flip side of my X-Men ranting is the joy I felt after spending $3 on the (for now) last issue of The Humans. Here’s a book I looked forward to
throughout it’s entire run. The stories were exciting, explosive, mean and horribly gross throughout. I 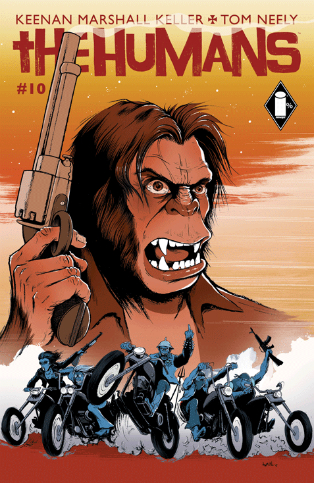 enjoyed every minute of every issue.

Adding to my love of the story of The Humans motorcycle gang is the exuberance of the creative team. Each issue, Keenan Marshall Keller and Tom Neely went above and beyond, whether it be the letter section at the end of each issue, song downloads (ten for this issue alone!), bonus artwork, and the gratitude the team expressed towards fans of the book. While Keller’s and Neely’s names were on the cover, they always pointed out that their vision wouldn’t have been complete without the work of colorist Krisina Collantes and art assistant Carmen Monoxide. This gratitude isn’t just shooting for the populist vote. It feels real. Keller and Neely thank Image Comics for letting The Humans be as dirty as they needed to be. I raise this can of Lone Star to you, Image!

For those who have been reading The Humans all along, issue #10 finishes the first major story in the right way. Vengeance is gotten, but some notable characters don’t make. Others are on their way to the hoosegow, which is where we’ll find The Humans sometime next year. I’ll give a heads up when things start going down!

The Good Dinosaur and Bill Nye’s Admirable Exercise in Futility