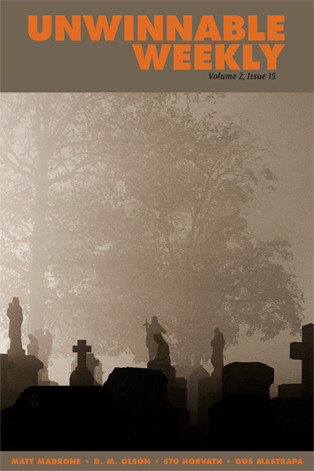 This column is a reprint from Unwinnable Monthly #67. If you like what you see, grab the magazine for less than ten dollars, or subscribe and get all future magazines for half price.

I am terrified of my own brain. It blurts out stupid things regardless of my mouth. It shakes me to the core with stress and anxiety. It can’t seem to recall so many things, from baseball team rosters to the names of casual acquaintances and co-workers, to promises I’ve made to my wife. Of course, I have my theories as to why this is, but as those theories are mere crackpot creations of my misleading and horrifying brain; they can’t be trusted.

Perhaps that’s why “Doing the Right Thing” slays me. The song, by a British band called Daughter, and on an album, Not to Disappear, that won’t be released until next year – devastates me. I doubt I’m alone in this reaction, but I find myself listening to the song almost masochistically, as if I’m watching a horror flick and waiting for it to make me jump.

“Doing The Right Thing” is a song about dementia. It’s a universal fear and I guess it should make me feel better that I’m not the only one who’s afraid of being trapped inside their own mind. Perhaps a longing for that communal comfort is why I listen to it.

Still, as much as I try to play records around the house and dance with my 3-month-old son, 95% of my music listening time is solitary. Being human means there are going to be moments you can’t share with others, which is why live concerts – and singing along with a crowd of hundreds or thousands to words you all know by heart – means so much to music lovers.

Listening to recorded music and analyzing it isn’t the most appealing social activity, and the more popular songs often play comfortably in the background while you do something else, or provide a beat you can dance to. The crushing ones are likelier to be absorbed alone; just you and a lone voice of despair – longing and forlorn – singing through your headphones.

As such, “Doing the Right Thing” is not for the faint of heart. To me, the most devastating verse ends in the refrain, and is about what the protagonist envisions for herself in a future ravaged by Alzheimer’s:

You’ve been reading an excerpt from Unwinnable Monthly Issue 67.