There’s a folk rock band with a small cult following based in Lancaster, Pennsylvania – Amish country – called The Innocence Mission. Their lead singer, Karen Peris, has the voice of an angel; her husband Don plays a lead guitar to match. They’re accompanied by bespectacled bassist Mike Bitts, who will give your kid weekly music lessons for $96 a month. They never tour anymore, and since their drummer left in the late ‘90s, their records have gotten shorter and shorter, and lighter than air, and this month they’ll release a record you’ll probably have to strap down to keep from floating away.

I’ve loved them for almost 25 years. They’ve made me do a few things I’m not entirely proud of, and one of them is this:

Many years ago, I conned my parents into paying an ungodly sum to buy me the holy grail of Innocence Mission records – Tending the Rose Garden, one of the rarest, most unlistenable EPs by a respectable band ever pressed to vinyl.

Their 1986 debut release, a five-track, cringe-worthy middle school yearbook photo of a record, just 1,000 copies of Tending the Rose Garden were ever made – and in the decades since its release on some label called LLIST, the band has been buying back copies to spare itself – and the world – the embarrassment of its continued existence. I’ve long wanted to start a ridiculous mini-site to track all the copies by serial number, owner and current location. Maybe one day I will. 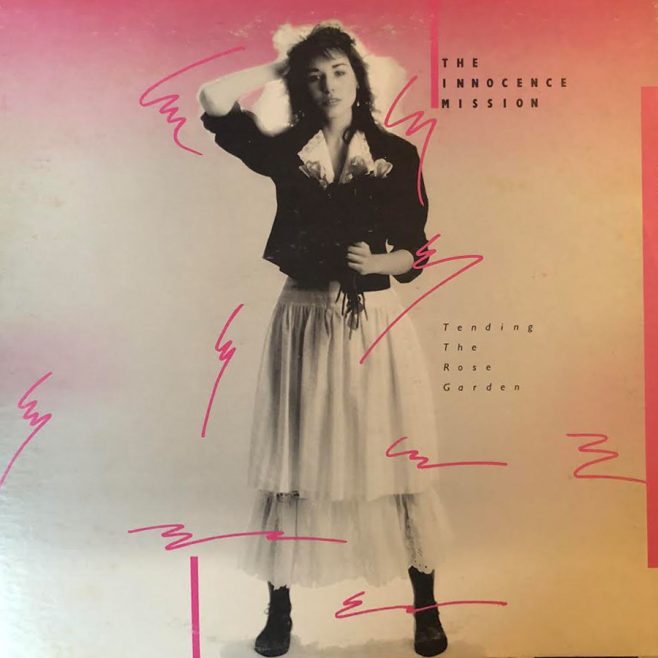 For my part, I have my own, still-sealed copy framed over my record player in the living room. But that’s not the worst part of this story. My parents were happy to make it my Christmas present that year, and, even though it’s essentially worthless to all but an infinitesimal fraction of the record-buying public, every Innocence Mission collector – all four(?) of us – isn’t truly an obsessive member of the tribe without a copy of his or her own.

And then, just a couple years ago, I bought a second one. It was far cheaper than the first and, I reasoned, why own just one ultra-rare record when you can have two?

Yet that’s still not the worst part of this story.

The worst part is this: A few days ago, I bought a third.

The worst part is this: A few days ago, I bought a third.

I was on eBay looking for something else, it was there and for the lowest price I’d seen yet, it called out to me, I even bartered it down by 10 bucks and, who am I kidding, I’m an idiot.

And yet, maybe an even worse part of this story, or maybe the best part, is that buying it made me incredibly happy. I needed it. For a number of reasons, I really needed a rare and awful and wonderful mid-80s EP the band I love so much loathes with all its heart.

Matt Marrone, Rookie of the Year, Tending the Rose Garden, The Innocence Mission