You wake to the same music you heard yesterday, the same music you’ll hear tomorrow. The bustle of the busy street is too loud. Who are those people rushing to work, to school, back-and-forth like shadows? You don’t know, don’t care. They’re not important. Head down, ‘phones on, don’t make eye contact. You’ll get by just fine without them.

What’s the point of other people, anyway?

The World Ends With You’s protagonist Neku initially seems cut from the same antisocial amnesiac cloth as Final Fantasy’s Cloud and Squall. Yet where those archetypal teenagers often felt teenage by design only – young men emotionally stunted for the purposes of plot and marketing – Neku is utterly defined by his adolescence. The epitome of teenage isolation, he’s tried to understand other people, but his total lack of adult empathy makes them intrinsically unknowable, an unsolvable enigma. Faced with this failure, he cuts himself off from the rest of humanity with his headphones; everyone else is just noise, unnecessary complication.

When Neku wakes up lost in the crush of Shibuya’s iconic Scramble Crossing – his memories taken as entry fee for the Reapers’ Game, an otherworldly contest for the recently-deceased to fight for a second chance at life – he’s forced to reassess these preconceptions. Under attack by physical manifestations of the hated Noise, it isn’t until he teams up with another Player, budding fashion designer Shiki, that he’s able to fight back. If he can’t learn to cooperate with his new ally, to make friends and forge alliances with the other teenagers trapped in the Reapers’ Game, he faces erasure. Only by surviving seven days of increasingly challenging trials can Neku win his promised resurrection, and to do that he’s going to have to trust his partner, leave behind self-centered introversion and take his first steps towards emotional maturity.

While adolescent protagonists are an overused default in JRPGs, adolescence is rarely anything but lazy shorthand. The stereotypical teenager is driven by a desire to shrug off parental influence, leaves home to forge a place in society and in the process needs the workings of the adult world 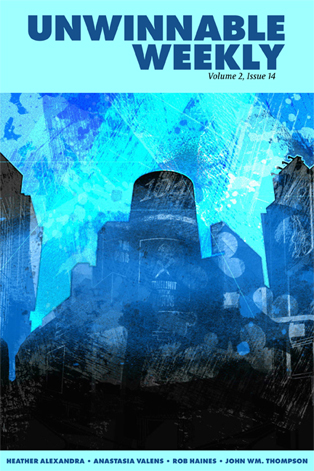 explained to them by those they meet along the way. Plot elements can be easily concealed by a teenager’s lack of self-awareness and reticence to share secrets or show weakness and any meager character arc feels dramatic when it begins with a blank slate. Rarely does a narrative attempt to explore the realities of passing through adolescence, the confusion and conflicting expectations of growing up and being expected to navigate the complex rules and systems of adult life with little explanation.

By comparison, Neku’s journey is a teen odyssey. Shibuya is presented as an adolescent playground, its disorienting web of streets and alleyways lined with all manner of music and clothes stores, ramen restaurants and fast food joints, concert venues and a hipster cafe run by an enigmatic graffiti artist who may or may not be ultimately responsible for the existence of the Game. Bands gather to argue in the street, while hyper-popular fashionista bloggers descend upon their chosen delicatessen du jour, driving their fans into a fury of consumerism. Collectible pin-badges are released by noted local designers, change hands for extortionate prices, then are smashed into each other in a playground game somewhere between marbles and conkers. Friends shop together, break up, make up, break up, make up, promise never to argue again. The latest tunes blare from mobile phone speakers while faceless businessmen scurry past like shadows on their way to whatever soul-crushing tedium consumes their days. If it wasn’t for the threat of casual annihilation by passing Reapers – and the demonic-red countdown timer seared into the back of his hand – perhaps Neku could’ve eventually found some semblance of maturity wandering these streets within the protective aegis of his headphones.

Plunged into the Reapers’ Game, however, Neku is forced to rise to a challenge he doesn’t understand, bound by arbitrary rules and restrictions, utterly reliant on other people with their own conflicting agendas. His natural inclination to withdraw is denied by the necessity of cooperation – it’s made clear from the outset that a Player with no partner is defenseless against the Noise – and it’s only through Shiki’s quick thinking when she first encounters Neku that his aversion to teamwork doesn’t immediately get them both erased. Depriving him of his childish escape from the real world is a vital step towards emotional adulthood, of learning to trust people’s intentions rather than dismissing them as unknowable.

You’ve been reading an excerpt from Unwinnable Monthly Issue 66.

A Ship of Broken Jedi