So far the Aliens/Vamipirella comic is coasting along almost solely on the good will of the two franchises represented in the titles, but just barely. Since I don’t really know what’s par for the course in Vampirella comics I can only guess that this is a somewhat lukewarm representation of her. That’s definitely the case for the Aliens, who basically establish that they’re a nigh unstoppable threat in this issue, killing three of the scientists and pretty easily decimating the futuristic armed detail that arrives halfway through the issue. Maybe some gory horror fun will save this series, because right now everything just seems a little undercooked.

I’ve read many comics featuring the Xenomorphs in my time, and generally the good ones are able to establish a unique tone and personality right off the bat. This comic is struggling to do that so far, although that may just be the pacing of the overall arc of this miniseries. We’ve spent two issues essentially in a hatch and a hallway, and some cutaways to a bridge on a ship. Besides the Xenormorph costumes this could be live action and filmed on a low BBC budget! It’s not artist Javier Garcia-Miranda’s fault either, every other detail he’s drawing, especially the aliens and the gore, is fantastic. Again it’s more being hit with the pacing of a comic book, and the reality of trying to set things up for future issues while trying to keep things $3.99 interesting in a bloody room.

Another problem I have with this issue is that the characters are so dull. Alien comics usually do wonders in establishing characters within one issue, so that it’s easy to keep track of who’s biting it when the stuff hits the fan. My suspicions that the one other scientist survivor is a traitor and/or an android seem to be wrong, as Vampirella drinks his blood to revive herself from the minor flesh wound of having a Chestburster exit her body not long before. Her finding out about the android thing by drinking his blood would have been funny, and it would have also explained why a dull character is acting sinister, since androids in the world of the Alien movies tend to be sneaky and sinister (Bishop excluded). But funny, and most other things people like in their comic stories, tend to be taking a backseat with this series so far to a progression of beat-by-beat storytelling reveals, not unlike a video game.

I’ll keep going with this though, there’s some nice artwork and a fun reveal at the end of the issue. There definitely seems to be something that Corinna Bechko has in store for this series, which probably will read better once collected. I’m also probably at a disadvantage having not read many Vampirella comics because so far I find her to be pretty dull. Just looking at the various comics featuring her that were released last week you can see so many more layers of fun cool sexiness just from the covers alone. Even one of those three things would be appreciated in this comic going forward.

At this point I call that Vampirella is the android!

This issue actually comes out this week, thanks to Dynamite Entertainment for providing us with an advance digital copy of this issue for review. 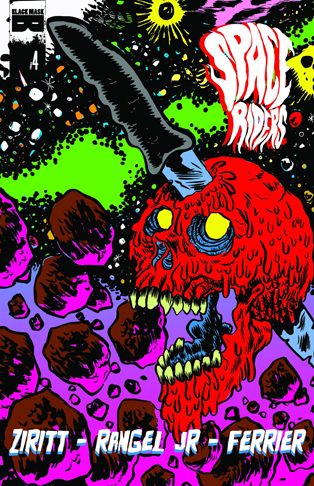 And lo Fabian Rangel Jr. and Alexis Ziritt’s psychedelic space opera has come to its conclusion. Much like the first issue, Space Riders  # 4 continues to be a 70s Kirby/Heavy Metal hybrid. The characters come center stage as the team shifts focus from the previous issue’s MacGuffin (the Lost Temple of the Gods) to a more character centered arc.

Space Riders # 4 is a big ol’ trippy space battle.Capitan Peligro and his crew rush back to save their robot benefactors from last issue as well as the whole Space Riders organization from the forces of Satanus and Hammerhead. I don’t think I’ve seen so much violence in space since Aliens. There is a double splash of the Santa Muerte firing death beams from its eyes!

I brought up Kirby before. While Space Riders doesn’t always share the King’s themes when it comes to space operas, it certainly does in style. The most recent issue of Heavy Metal showcases some gorgeous colored Jack Kirby Lord of Light/Science Fiction Land designs. That combined with his Fourth World. It’s hard not to look at that work and draw a parallel to Ziritt’s pencil and color work.

Space Riders is a must read for anyone who browsed old video stores’ horror/sci-fi sections. It’s more batshit than Secret Wars, that’s for damn sure. 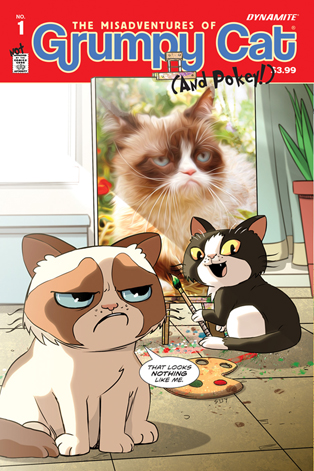 The Misadventures of Grumpy Cat and Pokey #1

Oh, the places I go when writing advance reviews for Last Week’s Comics. You know her from that mythical realm known as the internet, it’s the one and only Grumpy Cat, now with her very first comic book series. Sorry, more enthusiasm you say? Well I’m actually imitating Grumpy Cat, because she’s always grumpy and um, yep that’s the premise of this comic. While it’s an enjoyable book for kids older folk may think that this persona Grumpy Cat has been given by various writers in this issue is a little too familiar. A cat that’s always in a sour mood, likes to sleep, bosses around a dog and a cat that she lives with, yep sounds like a weird knockoff of Peanuts, or maybe Ziggy.

But seriously, The Misadventures of Grumpy Cat and Pokey #1 isn’t all that bad. Again, it’s fine entertainment for kids with wonderful artwork and very straightforward storylines. In this issue Grumpy goes on a bunch of adventures with her brother Pokey, and tries to solve the mystery of turning on the TV with Pokey and their other animal housemate Dog. Some of the adventures Grumpy and Pokey go on include a haunted house, some superhero adventures and Comic-Con. It’s actually this last story where I related to her the most, especially since I’m going to New York Comic Con this weekend for the first time in five years, and from what I remember last time I had a pretty similar grumpy reaction to the whole thing.

If there’s only one complaint I have it’s that Grumpy’s unwavering grumpiness can be unbearable. I get that these characters tend to be one-note, but even “Proto Grumpy” Garfield had his moments where he either realized he was wrong, was amazed by something or was proven wrong by Jon, Nermal or even Odie. It wasn’t very often but it happened, and it added some variety to the repetition that comic strip tended to fall into. There’s a moment in the story from this issue “Paws Of Justice” where Grumpy is confounded with what appears to be Pokey zapping something with his eyes, and agrees to go along with him in being a superhero. It’s the one time her demeanor changes in this whole issue, and it’s a welcome change for the reader and probably the artist bored of drawing the same facial expression.

It’s early in the fictional life of this character though, so I’ll guess we’ll see how long they can stretch this out long after interest in the meme wanes. If they can keep the level of talent on this comic the sam then I can highly recommend this for kids. Ultimately more comic books meant for kids are important, and some variation from the superhero glut is welcome.

This issue is actually out just in time for New York Comic Con this week, as Dynamite Entertainment was awesome in providing us an advance copy to review.