I have never played Final Fantasy XIII, nor do I intend to. I may be a Final Fantasy fan, but universal non-recommendations from everyone I know keeps me far away from XIII. Even so, I can’t stop thinking about it. Not about why so many disliked it, why it received 2 sequels, or why views on the game were so much more favorable in Japan. I’m not really “thinking about” XIII at all. It’s more like I’m daydreaming about it.

To be clear, this is not strange for me. I daydream all the time. What may be a bit odd is how much I care about these daydreams. In essence, I’m that friend who cares more about the novels he’s reading than the state of the real world.

My daydreams vary wildly, from punching that obnoxious bonehead on the subway, then watching the inevitable “this did not work as planned” reaction, to watching the end of the world, to sitting atop a tree somewhere in Central Park, to a cyberfuture world in 2250. There’s always a jumping off point, something to trigger an elaborate, imaginary scene. Sometimes it’s a couple on the street, other times it’s those feelings I get during the credits of a good movie or show.

But more often than not, it’s music. Specifically, music from JRPGs.

As a game designer, musician, RPG fan and soundtrack enthusiast, it seems like I would have pinpointed why JRPG soundtracks captivate me like 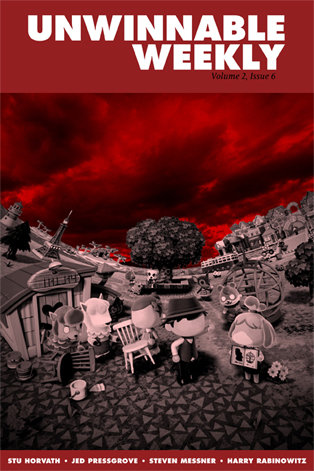 Without knowing much about her, I create a scene involving protagonist Lightning. Maybe that’s unfair to XIII, though. This is not the Lightning you may know. In fact, I’m pretty sure this Lightning shares very little with the actual Lightning that exists in XIII. But Lightning, or Susan, or whoever this is, exists in my dream. She’s backed by Masashi Hamuazu’s “Lightning’s Theme”. Let’s call her L.

This imagined Lightning, L, is alone, in a room devoid of color. She’s sitting on a made-up bed, back turned to tall, standing windows. (0:13) Her face says it all: there is something she must do, something impossible, and just the thought of trying terrifies her. Red and blue sirens blare behind her. She tenses. Stuck in inaction, a dimly lit melancholy further encompasses her. The air feels like an ocean.

You’ve been reading an excerpt from Unwinnable Monthly Issue 58.