I’m feeling adventurous again, so much like last week when I dove into the unknown with The Tomorrows #2, I fly into the mystery that is The Shadow #2.

I’ve long known about the character of the Shadow – the iconic laugh, a Link Wray song and an Alec Baldwin film (that was better than I expected) – but I’ve never ventured into his world. Our adventures in Volume 2 of the series center on the Shadow’s early days. He’s on the trail of the Society of United Magicians, who themselves are after a secret that fellow magician Harry Houdini may have taken to his grave, something called “the last illusion.” The Society is not above threats of damnation, kidnapping and were-monkeys. The Society is so powerful that even a guy like Aleister Crowley is frightened of them.

Considering all the realms The Shadow touches – adventure, old-timey pulp action, super heroics, magic, magick with a “k” – the storytelling and art are rightly out-sized and unconventional. Rarely is the action contained to the actual panels on the page (the Shadow himself often looms large) and the characters themselves are exaggerated to the point of satire. Colors are dark and shading is heavy. The dialogue is dramatic, much in the way I’d imagine the old radio serials to have been.

The world of The Shadow doesn’t necessitate jumping in at the beginning, and while issue #2 flows directly from #1 (I was easily able to read #1) new readers shouldn’t be scared off. If you’ve got room for one more hero and are inclined towards fun, pulp stories, The Shadow is waiting for you. 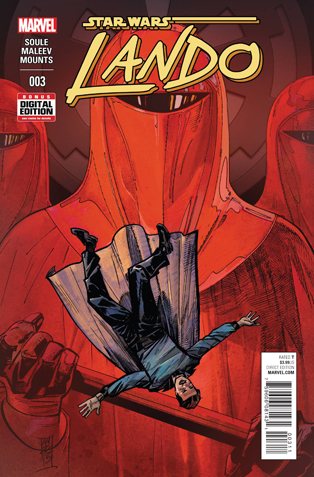 This is the a pretty straightforward issue of Lando, and yet so much happens. Again mostly taking place on  Emperor Palpatine’s ship, in this issue we get to see Imperial bodyguards fighting, find out what those bodyguards were guarding, check in with the Fett-ish bounty hunter Chanath Cha and learn more about the nature of Lobot and his cybernetic male pattern baldness (always a bonus). What we also get is more background on most of the key players, including some great Lando character moments and more background on Ugnaught member of the crew Sava Korin. What we learn about him actually raised a question for me that I will address in a little bit.

I have nothing but praise once again for what Charles Soule has been doing writing-wise with this series. While this is a pretty basic heist story with some major ramifications Soule has managed to do some wonderful character building, and even some world building. While I’m not sure what level of role Chanath Cha is going to play, other than being defeated by Lando, all of the other players are given motivation and dimension. To pull these things off without many shifts in setting is no easy task. Not to mention Soule’s ability to bring a nice dose of levity into the story as well.

Alex Maleev does a wonderful job adding to the characterization, especially with multiple coloring and other artistic choices he makes in this issue alone. There are moments where a close up of Lando’s face and a blue hue to the panel caused by the interior lighting of the room of the ship gives weight to what he’s saying about the choices he’s made in his life. While he won’t say it to Sava Korin, in the wake of his friend Lobot almost dying Lando comes the closest we’ve ever seen him come to admitting that he is regretful of some things, maybe most things. Some good fortune a few pages later erases that hint and restores Lando to his normal setting of cocky and self-assured, but it does make you wonder how much of Lando’s default setting is a put-on.

Now my general Star Wars thought. After discovering a room full of Sith artifacts on the Emperor’s ship we learn that Sava Korin was a professor of Jedi history before Emperor Palpatine banned the general public from being able to learn about the Jedi, which led to him losing his professor position and becoming a criminal. Since I assume this takes place around the time of A New Hope, and Lando seems pretty oblivious about anything regarding the Jedi, does that reflect what the average person in that galaxy knows about the Jedi Order? Obviously The Sith would probably be an unknown to the average person in the Star Wars universe, but weren’t the Jedi generally well-known protectors? I think a major factor that screws with them being erased from the history books is that only 17 or so years have passed, at least according to the prequels. That only means that young people would have no clue about the Jedi, but a good chunk of the general population probably remember seeing Plo Koon and Kit Fisto fighting in the Clone Wars. Ugh, I just shivered thinking about the prequels.

I guess my complaint is that I wish the prequels never happened, and that somehow they could restore the timeline so that enough time has passed that by the time of Episode IV where people truly have forgotten about the Jedi. Even in Star Wars they’re regarded more as folklore than a once active order of religious monks that were basically galactic police officers and space samurai. You get that impression in A New Hope from both Han Solo during Luke’s training scene on the Millenium Falcon, and by the Imperial Officer stupidly making fun of Darth Vader’s beliefs during that conference on the Death Star.

Of course, a lot of that has to do with the fact that originally George Lucas probably did want at least 30 years or so to have passed since the fall of the Jedi Order. For some strange reason he really wanted Luke and Leia babies at the end of Revenge of the Sith, which in turn compressed the interim between Episodes III and IV to not clash with how Luke and Leia are teenagers at the beginning of A New Hope. Of course, they also weren’t supposed to be siblings originally, ugh my head is starting to hurt. Rant over!

That said, it’s neat how Charles Soule has integrated the Jedi and the Sith into this storyline, and also caused me to contemplate something I haven’t contemplated in a while about Star Wars. It’s also allowed me to add another point to my long list of things Lucas screwed up with the prequels, and that’s how unrealistic it is that things have fallen apart that badly in seventeen or so years. The heroes of a major war have been forgotten, and all the shiny spaceships now look like garbage? C’mon George.

At this point my list of things that Episoded I-III screwed up is at well over a thousand entries.