This is a reprint of the letter from the editor in Unwinnable Weekly Issue Fifty-Seven. You can buy Issue Fifty-Seven individually now, or purchase a one-month subscription to make sure you never miss an issue!

I am not the Unwinnable editor-in-chief, but was asked by Stubert to step in and provide some words contextualizing this issue as it has “a lot of stories about people losing interest in videogames.”

And for better or worse, as creator/moderator of the Patreon-fueled don’t die – an oral-history web project chronicling people’s conversations with me regarding the videogame industry’s countless disconnects, tensions, and pain points – “stories about people losing interest in videogames” are now synonymous with my name.

As someone who has zero clue where his college degree is but looks on fondly at his 1995 Blockbuster Video store Donkey Kong Country championship plaque that has survived three moves, I can tell you: This is not exactly an appositive or banner I ever imagined myself taking on.

Not that I’m a cheerleader for videogames per se. I’m not interested in telling people they need to play more. As I have written in this publication before: It’s draining to be in a relationship with something that doesn’t want to grow with you.

And truth is, decades of the medium and industry being so siloed and ignored by the rest of pop culture and other industries have rendered it with acute cases of myopia, self-congratulation and insecurity so strong that I can’t blame anyone for moving on or aging out. Funny thing is, when I talk to people in Hollywood, they scoff at assertions that “videogames are bigger than Hollywood.” 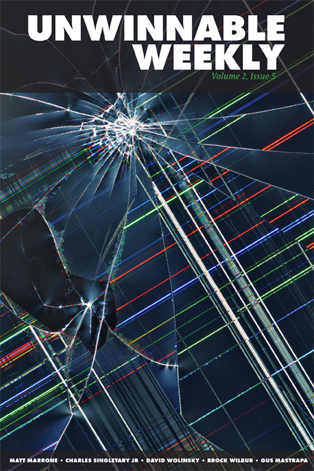 Then again, if I told you the names of mainstream media outlets that told me they “don’t care about videogames:” a) I’d be an unprofessional gossipy baby and b) you’d simply be amazed.

Truth is, I don’t care whether videogames as a medium are perceived as being more legitimate or more viable to people outside of them. People outside the current circles can already see the potential and will floor us all. One day.

And truth is, after 9 or 10 years of writing about them, I care far more about what other people have to say about them to help me understand why they’re used as a crutch for people to make death and rape threats against each other online. I wonder why some people feel so strongly over their consumer purchases that they are compelled to bully others away from enjoying or expressing themselves in the same pastime.

I’m sure by the time you read this, other publications will have already ran anniversary pieces using the past tense for verbs in relation to people being afraid about last summer. The past tense has no business around any of this stuff. Earlier this month, a relative stranger cried to me on the phone about what people are doing to each other online in the name of Videogames. Others with less awareness of it email me, skeptical what the big deal is and why others aren’t just “getting over it” already.

Everybody is still losing.

And I suppose this is the part of this where I say, “Well, hang on – it’s not all that bad. Things will get better.”

You’ve played too many videogames.

I’m not sure it will.

The challenging thing about weighing in on “why are people so angry about videogames on the Internet?” is you tend to run the risk of sounding sanctimonious. The flares you send, barefoot from the frontlines of decency, will be ignored by people on “the other side” if you are truly so naive you think there are only two sides to any issue or obstacle. The forks in the road don’t split for us, though. They are a wide open field.

Where we choose to go is up to us.

I can tell you this.

I have talked to nearly 90 complete strangers for don’t die. I understand now my project is not really about videogames – it’s about us. We are building a mirror together and every interview I post is another crack in it.

It’s not a pretty picture.

That’s as sanctimonious as I’ll choose to be here. I’m already a few paragraphs deeper than I’d prefer to go but it would be a lame letter from the editor if it cut off mid-thought.

I saw someone on Twitter earlier this week say, “If your entire argument for a political or social reform boils down to ‘people should be nicer’ then what the fuck are you actually arguing?” They weren’t talking about videogames because – believe it or not – not everything is about videogames.

I get what they’re saying, but I think what one in that accused position is actually arguing is: Man, isn’t there enough fucking pain to go around already?

You can’t tell another’s army to stand down by just asking kindly. Maybe you can point out the ways we’re all losing before we start making any actual progress.

War’s a funny analogy, because we’ve heard the term “console wars,” but I don’t think have often pondered the casualties – be they psychic or physical. It’s also funny because the more that’s at stake, the less that people want to fight. The inverse is true, too.

But I’ll side-step sanctimony for a bummer any old day. It feels closer to something like the truth, anyway. And at least what I say is informed by what nearly 100 complete strangers have shared with me about how they, too, feel like everybody is losing. So it’s not just me. It’s you, too.

This week, if you haven’t gotten it yet: There are a lot of stories about people giving up on videogames.

Matt Marrone writes about packing up his consoles, giving them away and reflecting on no longer having patience for things he no longer needs. Charles Singletary Jr. dissects why the term “indie” in videogames today is essentially no more than a contentless dogma. Brock Wilbur writes about re-gifting games he was too afraid of being sucked in by and making other grown men cry in front of their kids in Watch_Dogs. Gus Mastrapa continues his Dungeon Crawler saga, fittingly, in an entry that similarly deals with nausea.

I throw down with something I haven’t written yet and have been trying to wrap my head around for the last week since finally watching the Kurt Cobain documentary: It’s not really about videogames, but it sort of is. It’s about what Unwinnable stands for: Trying to make sense of staying a fan of things as an adult – or whatever it is we call ourselves these days. Now I have to go write it, so, toodles!

Despite the bummers, have a great weekend and treat yourself to a fantastic sandwich. You are worth it and we love you,

Pax Prime 2015 is coming up soon – a week from this writing. We’re having a party. Because that is what we do. We’re joining forces with our friends at GungHo and Indie MegaBooth to take over Axis Pioneer Square on August 28. We will have a ton games – Galak-Z, Memory of a Broken Dimension, Republique, Dark Dreams Don’t Die, Gang Beasts and Inversus – playable at the gallery, Matt Hunter spinning tunes, sweet Unwinnable T-shirts for sale, giveaways, booze, food, mayhem, magic and the usual assortment of Unwinnable characters from the rogues’ gallery.

Except me. Too close to my wedding, alas. Next year, Seattle.

Check out our Eventbrite page or the Facebook event page for more information.

It will be a great time, even if you decide to quit playing videogames after reading this issue.