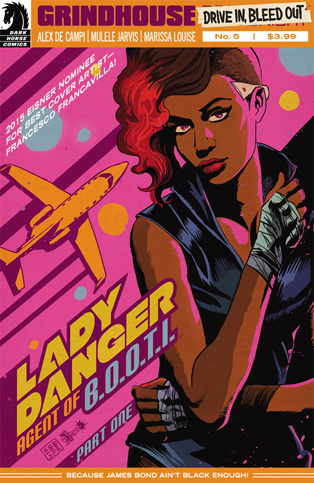 Our latest saga in the Grindhouse world is titled “Lady Danger, Agent of B.O.O.T.I,” which I initially read as “Lady Banger,” so yeah, that’s where my mind went first.  Oh, and B.O.O.T.I stands for “Bureau Of Organized Terrorism Intervention,” in case your mind goes to the gutter as fast as mine.

Lady Danger (or Rachelle, to you civilians) is as bad ass as you’d think.  She put Fong Ah Chan’s crew down in no time.  No, she’s even more bad ass… after trouncing Chan’s gang, Lady Danger took the kidnapped doctor and nurses to the impoverished Thai village (that was their original destination) so they can try to find a vaccine for a new strain of immunodeficiency disease.

Meanwhile, back in the States, young Kevin pines for Rachelle, but is his homeboy Paco giving him good advice?  And why does the C.I.A want to take over B.O.O.T.I?  And I did not expect Dr. Washington to have such nefarious designs on Rachelle!  That’s an awful lot of shit for 20-something pages, but somehow it all works.

I wasn’t familiar with Alex De Campi’s work until the previous installment of Grindhouse, but I was an instant convert and I continue to search out her work.  Her recent stories, like Grindhouse and Archie vs. Predator, are so wonderfully outlandish that you can’t just like them, you have to love them.  Her characters are hilarious and gloriously over the top, and de Campi sure loves some T and A.

Mulele Jarvis’ artwork is wholly new to me, and it’s very exciting.  He captures de Campi’s larger-than-life battles with all the gusto they deserve.

So, until next month, remember folks: “When Americans are in danger abroad, the President no longer sends an army.  He sends one black girl.” 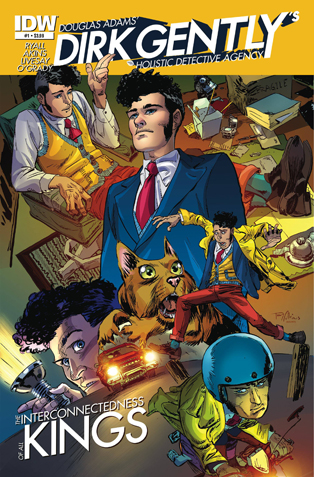 When one hears the name ‘Douglas Adams’ they immediately think of his legendary Hitchhiker’s Guide To The Galaxy series, or maybe the time he spent as a writer and guiding force on Doctor Who in the late ’70s. Many other things usually spring to mind before they get to Dirk Gently, his private eye who runs a “holistic detective agency” and believes in the interconnectedness of everything. Often when he sets out on a new case he simply hops in a cab and has the driver “follow the first car that has a clear idea of where it’s headed. “ Gently has been the star of several books and a radio and television adaptation. Now he’s the star of his own comic book miniseries, and it’s pretty great!

Adams unfortunately left this planet before he was able to leave us with as impressive a collection of Gently stories as he did with the characters and world inHitchiker’s. He did manage to provide a template for others to work from with the stories he did leave behind though, and Chris Ryall does a great job adapting the character for the comic book page. The humor and wild elements of supernatural, fantasy, science fiction and mystical are all on display right off the bat, and like other great detectives throughout fiction Gently is a character that is malleable enough so a variety of authors can provide their own special take on him. While Ryall sticks pretty close to how Adams wrote him it will be interesting to see if he colors outside the lines in this world as this five-issue miniseries goes on.

As is the case with many Dirk Gently stories time is also interconnected, and we start in Ancient Egypt to set up just one of the many plotlines in this series. Two characters in the past strike an unknown deal that ends up with them reawakening as mummies in the present. But this is only a small part of the story, and also in the present we see Dirk stumble out of the cargo bay of an airplane in San Diego. He grabs a random bag that’s not his from among the pile of luggage because he feels like the contents of the bag are interconnected to whatever his next case may be. It turns out the bag belongs to a somewhat wholesome looking couple, who obviously are harboring a dark secret. Dirk randomly teams up with the owners of a detective-themed coffee shop who think he’s crazy, and there’s also a bit about the homeless people with golden cell phones. At the end of the day it will all be interconnected.

The artwork by Tony Akins has a certain levity and cartoonish quality to it that’s appropriate for this series. While I pictured Dirk as heavier from the way Adams described him in the books I otherwise enjoy the visual design of the character for this series. It’s kind of a combination of David Tennant’s Doctor meets Elvis, with Gently’s unique detached demeanor rounding out the package. It’s like Sherlock Holmes minus all the observation rubbish, as Gently himself calls out Holmes as a fraud to his new coffee shop associates.

Dirk Gently’s Holistic Detective Agency #1 is a fun read that’s very true to the spirit of the late great Douglas Adams. Here’s hoping that this series will generate interest in more stories down the road. Much like with Sherlock Holmes there are many more Dirk Gently stories to tell, and many different ways to tell them. I’m eagerly awaiting the ride provided by this series, and I’m just going to follow the car that looks like it has a clear idea of where it’s going. 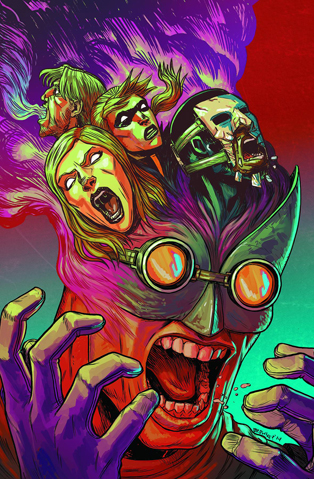 Sundowners Trade Paperback
(Dark Horse – Writer: Tim Seely.  Artist: Jim Terry)I’ve been curious about Sundowners since it’s debut, but I couldn’t fit another monthly series into my life.  So thanks to this new handy-dandy collection, I get to catch up with Chicago’s misfit superhero crew.Even though I’ve worked in behavioral health for years, I only recently became familiar with the term “sundowner.”  As it was described to me, a sundowner is a person who shows increased symptoms of dementia in the evening, or when the sun is lacking.  In the Sundowners comic book world, the name is given to a crew of superhero wannabe’s who met at a support group, run by a doctor (who himself could use a support group for his personality disorder.)  Dr. Shrejic may think his group suffers from various psychoses and shared delusions under their “night names,” but the Sundowners think otherwise.

The enigmatic Sundowners are: an old man, debilitated by a stroke; a woman of faith who thinks she derives her powers to do good from sinning; another woman who dresses like a crow and may suffer from acid flashbacks (clinical term: hallucinogen persisting perception disorder); a paranoid, punch-drunk ex-pug do-gooder; and a loner who melts into the night.  No one believes in their individual, or group, quests.  But when a literally illuminated Illuminati is your big bad, who wants to be on your side?

This trade collects the first six issues of the series, and as I understand it, after issue #6, Sundowners went digital (possibly due to poor sales) to finish out it’s run.  A second collection is due to drop this summer, and I eagerly await this.  Any new monthly series faces stiff competition (market saturation, originality, additional cost to the buyer… which was sadly my reasoning for holding off.)  But really, Sundowners has a fresh twist on the superhero team (are they disabled by thought disorders?) and our protagonists are hyper-aware of themselves (Dr. Shrejic: “Look… ignore the stupid outfit.  I’m a psychiatrist.”)  Plus, Tim Terry adds a nice touch by keeping his drawings two-dimensional, giving the book a very “comic book” feel.  I thought I was stretching with that observation until I saw writer Tim Seely’s note in the bonus pages.

Kudos to Dark Horse for letting the story play out.  Although I’m a natural pessimist, I’ll try to end on a positive note by hoping that a limited run maxi-series will keep the Sundowners’ story tight, leave us wanting more and trying to fill in the before and after of their sad tale. 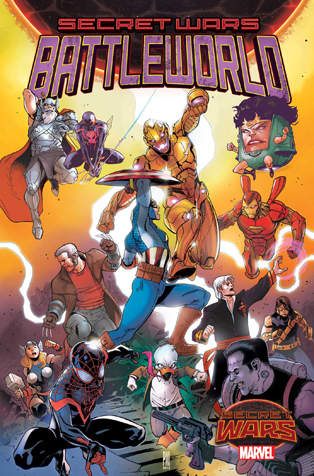 Since my review of Secret Wars #1 I’ve read more of the titles in the current Secret Wars series. I have a better understanding of what’s happening, and of this weird Frankenstein’s Monster of Marvel reality that is Battleworld. About to leap into this issue like Baron Braddock leaps from the massive wall called The Shield inSecret Wars #2, I was not prepared to get two almost What If meets What The–?!– style short stories. As a whole this issue is an amusing but not essential read.

I think a lot of it depends on what your take is on this incarnation of Secret Wars. If you’re a fan of all the Marvel realities essentially existing on a continent together then something like this is fun supplemental material. If you’re still cautiously optimistic like me you’ll probably just want to wait for the trades. While I have a better understanding of what happened and what’s going on it still seems so nuts and confusing. For someone who hasn’t been following Marvel continuity for the last 30 years I can’t even imagine a lot of this making sense, as there are many nods and character moments meant to pay off or reference events that happened in the comic books decades ago.

The first story is about the wandering nomad Frank Castle, merged with the astral form of Dr. Strange, taking on the Infernal Four. This deep cut is a reference to the all-star replacement Fantastic Four squad from the late ’80s/early ’90s featuring Wolverine, Spider-Man, Hulk and Ghost Rider, except demonic versions of them. Castle takes down all of them except demon Wolverine, and we discover by the end of the tale that it takes a lot to kill Stephen Strange’s astral form.

The next story is purely of a What The–?! caliber, as M.O.D.O.K. summons all of the different versions of himself into one place. They all bicker and fight, and eventually leave a mess of bodies for the Thors to clean up. This isn’t the first story to spotlight how ridiculous M.O.D.O.K. is, and I doubt he’s been removed permanently from this equation. I’m still not even sure what the equation is.

Again, I almost feel like the best way to take in Secret Wars is after it’s collected in the trades, because all of these individual pieces are too small to be enjoyed on their own. Considering how many characters from these different realities and timelines are going to be introduced and quickly killed off it may help to review it retroactively, and at a slightly cheaper price. I enjoyed Secret Wars #2 because it was settling into the groove of what kind of story is going to be told, an impression I did not get from the first issue of that series.

With this series I get the impression that it will be more like anthology tales from all over Battleworld. It’s a neat idea because of all the ground that can be covered, but I fear that there may not be any kind of settling into a groove, at least until we know what the end game of all of this is. For $3.99-$4.99 an issue I’d rather read the stuff that has an effect on the future of the various Marvel Universes as a whole, if any. I’ll probably do what I’ve always done with series like Civil War, Age of Apocalypse, Secret Invasion and the other Secret Wars: collect the central series and then base my subsequent purchases based of the quality of that. It’s been over 20 years since Age of Apocalypse that I’ve been that motivated.