Grindhouse: Drive In, Bleed Out #4 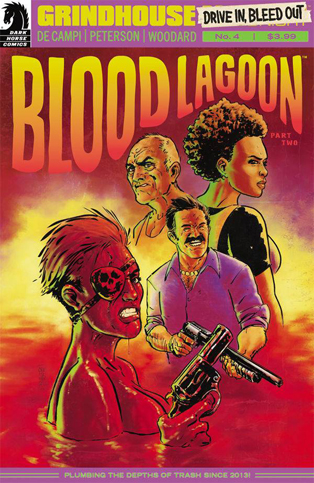 Now this comic is what my Saturday needed!  A total blast from first page to last.  My weak words can’t do this book justice, but the cover tells you pretty much what you’re in for.  The story is so weird and Southern, and weirdly Southern, that it could’ve sprung from the mind of Harry Crews.  But no, it’s from my new favorite comic book author, the transcontinental Alex de Campi.

Where to start, or finish?  There are giant ticks that can’t handle their booze.  Our main character has sunshine and rainbows coming out of her ass (you’ll see.)  There’s even a touching moment where a drunken redneck father finally bonds with his gay son.  The only complaint I have is that I didn’t get to read issue #3 first, which is part one of our “Blood Lagoon” tale, but that’s my own fault!

My introduction into the world of Alex de Campi came with the recent Alien vs. Predator story.  Grindhouse makes the misadventures of the Riverdale crew seem like a Disney cartoon in comparison.  Artist Chris Peterson and colorist Nolan Woodard are just as important a creative force in bringing Grindhouse to life.  They mix just the right amount of camp and horror (the idea of abovementioned giant ticks might seem silly at first, but wait until one jumps in your face!) and their use of blue shades is a great depiction of a practically lightless night.  My favorite touch might be the lettered sound effects (a fire that goes “rackle?”  That’s exactly what a fire sounds like!)  These seemingly small things really bring the pages to life.

So, the moral of our story?  Don’t touch “it,” no matter how much “it” wants you to, and keep plenty of booze handy for when the bugs attack… 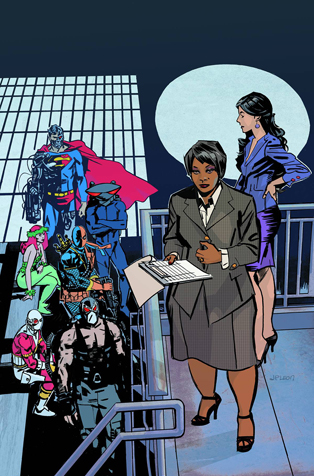 I recently wrote about Copra, the wonderful independent comic book written and drawn by Michel Fiffe. It was my favorite comic book discovery of 2014, and since reading it I’ve been revisiting the inspiration for the series: the late 80s/early 90s run of Suicide Squad spearheaded by writer John Ostrander. This series left such an imprint on the DC Universe and comics in general, yet only now are we seeing that inspiration take form on TV shows like Arrow and in a film adaptation ofSuicide Squad due out in 2016. What makes it so great is that it’s fun to root for the villains, and this entry into the Convergence event is no exception.

I’ll admit that I haven’t been following Convergence too closely. Like many Big Two crossover events there are always some great ideas and some duds dispersed among the many issues, and my wallet is just not thick enough to find out what’s what. As part of my revisiting Suicide Squad I thought this was a good place to drop in and see what’s up. While it’s not the greatest introduction to theConvergence crossover it is a great introduction the concept of the Suicide Squad, a group of mostly criminals assembled by government liaison Amanda Waller to do some down and dirty super-powered Black Ops missions. If the criminals cooperate and don’t get killed on the mission then their sentences are commuted.

And what a team of criminals! Since the ultimate goal is taking down the Kingdom Come version of the Alan Scott Green Lantern and his fortress in the sky New Oa Waller not only recruits the usual rogues like Deadshot, Captain Boomerang, Bronze Tiger, Poison Ivy and Count Vertigo but also brings in big guns Bane, Deathstroke and Black Manta. Add a Cyborg Superman, Star Sapphire and a secret heavy hitter villain from the Kingdom Come universe and you’ve got the Justice League of DC villains, and some potential live wires that could screw up the whole operation.

Frank Tieri does a great job of writing this first issue as a tense thriller and a “getting the band together” story. Combined with the tight pacing of Tom Mandrake’s panels the issue has a feel reminiscent of the first proper Ostrander issue of Suicide Squad, which I reread after reading this. It works, since this event is playing around with the different time periods of DC, and events like Kingdom Come and Zero Hour. What I gather from Convergence is that the mission statement of this event is to give the fans some knockdown dragout battles that are out of time, dimension and that pesky old thing called continuity. This is a fun idea that could get bogged down by stupid choices, but the crazy concept ofSuicide Squad actually plays well with this event.

Whether or not Convergence: Suicide Squad succeeds has yet to be seen, but as far as setup issues you can’t go wrong with an opening panel of Amanda Waller seemingly being killed by an off-panel gunman. Not only that, but a scene where Deadshot kills Toymaker in cold blood when their meeting goes sour shows that this creative team is not afraid to evoke the grittiness of the classic era of Suicide Squad. It doesn’t matter which side they’re working for, these are still people capable of doing bad things. But allowing for the grey to show in the black and white makes us realize that, on some scale, we are all capable of doing bad things as well.

A Dark Age of Infinite Scope