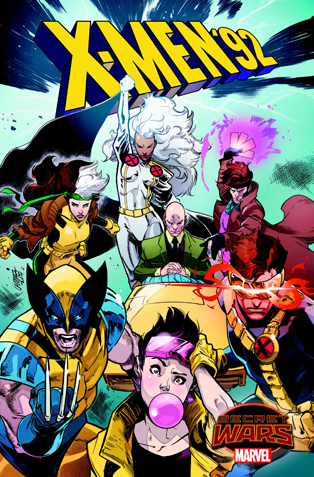 Maybe we’re all supposed to be in the dark when it comes to Secret Wars. While it’s supposed to be a total revamp of all things Marvel for the foreseeable future it’s also grounds for mashing up and revisiting things from the entire history of Marvel comics. With the first installment of X-Men ’92 and Inferno this past week we’re getting a direct revisitation of two distinct periods in X-Men history: the Jim Lee era of adjective-less X-men and the animated series, as well the team during the 1980s Chris Claremont-written Inferno saga. While I haven’t read the latter, I can say that X-Men ’92 gives me confidence about these Secret Wars. It’s a series that’s goofy on the surface, but reveals itself as completely batshit insane and interesting by the end.

Chapter one starts off in a manner similar to “Night of the Sentinels Part 1”, the first episode of the ’90s animated series. The X-Men are hanging out at the mall in costume and playing Laser Tag, in lieu of Wolverine breaking The Danger Room. All of the characters sound off individually, and already you get that writers Chad Bowers and Chris Sims are intentionally going with the characterizations typified by the animated series, which is really just the simplified go-to of what the characters are all about. Cyclops is the uptight leader, Jean Grey is very nice and just kind of there, Rogue is brash and southern, Storm is bold and talks in very dramatic proclamations, Gambit is a Cajun bubblehead, Jubilee is a “to the extreme” mall rat, and Wolverine is angry and hairy. Soon Sentinels comes crashing through the ceiling, and it’s apparent that this series is not wasting any time with the action.

The vibe is very similar to the kids-friendly animated series, or even the kind of comic that you may have received with your order at Pizza Hut in 1992. This turns out to be an intentional smokescreen, as it is revealed that Baron Kelly, the ruler of this corner of Battleworld, has a plan in motion to “rehabilitate” mutants at a place called the Clear Mountain Project. Longtime X-Men comics and movie fans know Robert Kelly as the mutant hating senator who’s out to stop the “mutant threat”. The mysterious nature of the Clear Mountain Project and its “new director” proves that even in the warped Battleworld this hasn’t changed. By the end of the issue the director is revealed, and it turns out to be a major villain that hadn’t even been created in 1992. This unpredictable twist is what is keeping my interest in what this series is capable of.

Scott Koblish’s art is a serviceable homage to the X-Men art of that era. A combination of Jim Lee and the animated series, with a touch of the offness of a freebie comic. It flows wonderfully usually, and really works with the digital comic format. If there are any shortcomings to it, like the aforementioned “offness” of character anatomy or a random inconsistency from panel to panel, it’s easily accepted as part of the plan.

This series is a planned accident, much like the extremely fun recent Transformers vs. G.I. Joe series. Is this a retro series, or a weird pseudo rehash of the “greatest hits” series Classic X-Men? Is it a Trojan Horse that’s helping to move along the plot of Secret Wars, or an enjoyable bit of fan service? The answer is “All of the above”, and at a $1.99 price tag it won’t hurt the wallet to check out this fun digital comic. 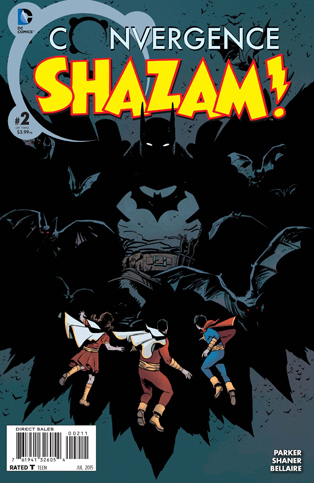 Well, I think I’ve found my favorite superhero comic of the year.

While the Convergence mini-series proper made no sense to me (mind you, I did not read Earth 2), I read some of the crossover series. I particularly enjoyed Hawkman, Crime Syndicate and The Question. However, Convergence: SHAZAM! Is my favorite of the bunch. By the time the first issue hit the stands, I’d read enough Convergence comics to get the formula. Heroes get introduced. The writers show their lives without powers. About 12-16 pages in, Telos makes his grand announcement that all the cities have to fight and then there’s a teaser for the big fight. It’s a good structure, but it gets pretty easy to spot after reading five or six of these issues.

Convergence: SHAZAM! # 1 actually made me forget the formula while reading it. The first issue focused on Billy Batson, Mary Batson and Freddy Freeman as they live inside Braniac’s dome. They don’t have their powers, but they’re compelled to investigate why the Fawcett City’s mayor and their Uncle Dudley. They stumble upon a plot by Dr. Sivana and his attempt to rule the domed city with the Monster Society of Evil.

That’s when the familiar Telos monologue came in and everyone got their powers back.  Jeff Parker, Evan Shaner and Jordie Bellaire treat the MacGuffin as a MacGuffin and approach the story as a classic Captain Marvel story that happens to guest star the Batman from Gotham By Gaslight.

Issue 2 sets the Captain Marvel and the Marvel Family against the Victorian Gotham City. Both cities, while they have dueling retro aesthetics, meld wonderfully under Shaner and Bellaire’s synergy. As bright and colorful as the 1950s idyllic Fawcett City is, Victorian Gotham is drab and dingy (though not entirely without color). Evan Shaner’s art captures the best of SHAZAM! creator CC Beck and Gaslight artist Mike Mignola and makes them both his own. These two worlds couldn’t be any different but Shaner and Bellaire blend them perfectly.

Dear Reader, this is a comic where Mister Mind unveils Victorian Era interpretations of Batman’s rogue’s gallery as his new Monster Society of Evil. If you don’t think that’s awesome then I have nothing for you. So go to your shop and buy these two issues already, will ya?

Oh Dan DiDio and Jim Lee? If you’re reading this, please give this team a SHAZAM! book. Pretty please?