The following is a reprint from Unwinnable Weekly Issue Forty-Five. If you enjoy what you read, please consider purchasing the issue or subscribing. 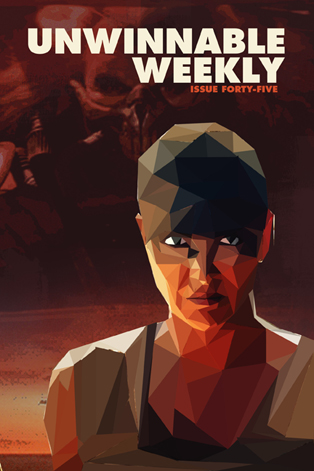 The women are plush, rounded in a way that no one else in the apocalypse is. Their bodies naked, they are smooth and pristine. To their nipples, someone has fixed milkers, even as they cradle dolls in their arms. Immortan Joe and his sons walk through their path the same way that they walk through a greenhouse a moment later. These are not people – these are cows.

“We are not things” is the mantra of the dispossessed, specifically the “wives” of Immortan Joe. In a world where the strong are those with water, oil and bullets, the wives are his “prized breeders,” property that he can do with as he sees fit. He does not perceive them, even his favorite, Splendid Angharad, as persons. He sees them as beautiful, baby-carrying treasures.

Mad Max: Fury Road is about personhood, the characters’ conceptions of their own selves and others. This theme runs through every aspect of the film.

The movie doesn’t take its time developing characters the way that we’ve been grown accustomed to in the past few years. It doesn’t slowly mete out a backstory that you’re barely interested in. At its core, Fury Road is distilled action and this carries through to the creation of characters. But there is care in that construction.

George Miller, the force behind Fury Road said that “everything in the story has to have some sort of underlying backstory.” The Doof Warrior Coma (the red-suited, flamethrower-wielding guitar player) has an origin story, even if all he ever did was bungee his way around the screen with a screaming death guitar.

What this means it that none of the characters are unimportant – none of them are things. Even if they flash by for a moment, even if you don’t remember that one of the Wives is named Capable, that level of detail and world building is there. Making a film is often filled with acts of convenience and this lack of economy is as staggering as it is enriching. Because everything has a reason for where it is, it creates an interlocking puzzle of character development. Every car in Fury Road works, every guitar plays, and every character has a name and a plot.

This is also important because the character development inside of the film is related to personhood. Immortan Joe’s villainy is partially defined by his inability to see anyone around him as something other than a commodity. The large breasted women are his cattle, the people below are worker bees, his War Boys are his bullets, and the harem of beautiful women his breeders. At worst they are objects, at best they are animals that he owns.

It is little wonder that Immortan Joe is contrasted with the femme-bicycle-driving Many Mothers. Clear references have been given towards their Native American leaning existence – including the concept that no one has ownership over anyone or anything. They live a nomadic life on the backs of bikes, disgusted when the Wives discuss the power that Immortan Joe holds over the people of the Citadel.

The titular Max is also treated as an object through most of the film. Once he’s captured in the beginning, he is sheared, stripped and tattooed before being muzzled. He is both a feral dog and a full-life blood bag for one of the War Boys. His first actions in the film are to lose his freedom, his car and his jacket, then turned into a macabre post-apocalyptic figurehead cum ferocity-infused IV drip. He says that he has been stripped down to a will for survival and this animalistic attitude persists until Furiosa offers him his humanity back in the form of removing his muzzle. He blatantly ignores her other two threats, only allowing her into the War Rig once she’s offered to get the metal off his face.

Later, when Max voluntarily turns himself into a blood bag, we see the juxtaposition of his previous inhumanity. Cradling Furiosa’s head and apologizing as he releases the air from her chest, he is a far cry from the raging animal hanging at the front of a War Boys’ chariot. It’s not that he’s been gentled. In this world of hyper-violence and pain, he’s showing a touch of the spirit that makes him a person.
We have a film where everyone has been broken down to their most valuable parts by a society gone feral – they are defined by their blood, their fertility, their milk, their power. But in the end, the strongest scenes in Fury Road are when the characters look past that and reach out to each other in compassion.

In these moments, they prove that they are not things.

Amanda Wallace is an evangelist for Kentucky Games,  founder of Storycade and occasional writer.