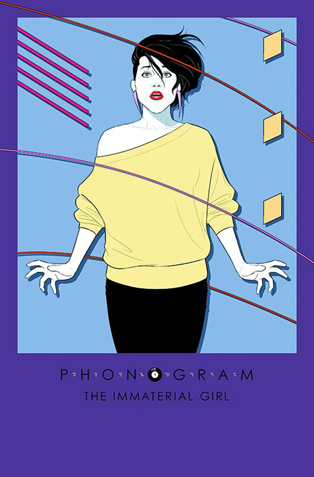 To say I was unprepared for this issue is an understatement. Phonogram: The Immaterial Girl #1 does a decent job of establishing the High Fidelity meets Books of Magic world of music magicians called Phonomancers that Kieron Gillen has created. For the uninitiated like myself I highly recommend at least reading Phonogram Vol. 2: The Singles Club #3 before reading this. In that issue we’re given an extensive introduction to Emily Aster, the main character of this series. At some point I need to go back and read volume one and two of this series in its entirety, because from the issues I read today I’m very intrigued by this comic book marriage of mysticism and music criticism that Gillen has pulled off.

From the cover of this issue that evokes the Patrick Nagel cover art of the Duran Duran album Rio, to the end sequence that takes place in a very familiar popular video from the 1980s, this issue is fantastic lunacy. Artist Jamie McKelvie does great job with the art in this issue, from the character work to backgrounds that are loaded with easter eggs and details that shows us a world that’s a familiar yet bizarre deviation from the music landscape of the 1980s until now. It’s like our reality from a pop culture perspective, but with the very real presence of magic. McKelvie and Gillen have collaborated before on other titles such as Young Avengers and Wicked + The Divine, and it’s apparent that by this point the two are natural collaborators that work well together.

Emily Aster is a woman who made a deal with a jewel-encrusted gloved pop star devil on MTV in her youth, and now a beautiful but empty version of herself lives in the main reality of the “real world”, and a flawed other half of herself named Clare is trapped in a limbo/hell, trapped behind mirrors and TV and computer screens. Aster refuses to allow Clare entry in this world, and always sees her when she looks in the mirror. Aster doesn’t like the idea of being burdened with the depression and emotions of Clare, instead opting for the self that is, in her own words, “-an obsidian swan with wings of flame”. By the end of this issue things flip for Emily, and the very self-assured Phonomancer may be finally getting some karmic redemption for what she did to her other half.

As a nice world-building touch there are also two backup stories in this issue. On one hand they serve as a sort of checking in with other characters, and on the other allow for some amusing statements and observations on pop music and culture in general. As Kieron Gillen himself says in the letter page section there’s a lot of autobiography in this series.

One interesting aspect to explore over these six-issues will be the limbo Clare has been trapped in. For a young woman who loved music videos and wished to be in them this probably means that we will be seeing Emily battle with elements from many beloved music videos from the 80s and 90s, or at least with some baddies from one particular music video in the next issue. Gillen has explored and paid homage to so many corners of pop music with the Phonogram series that it only makes sense to focus on music videos. There were decades when music videos ruled the teenage wasteland, and for better or for worse they remain a shared collective experience to a certain age group that I belong to, and as a result I can relate to their magic. Combine this homage and reverence with a rich world full of magic and fully realized characters and you’ve got the makings of a great miniseries. I’m looking forward to seeing how this music video ends. 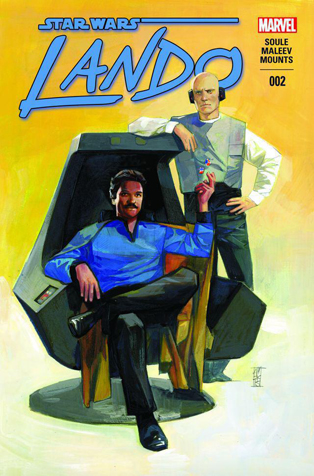 I just saw set photos from the upcoming Star Wars spinoff Rogue One, and I admit that at the very least I’m intrigued. Here’s a live action look at a dirtier corner of the already pretty dirty Star Wars universe, one that is hinted at by passing lines from Han and Lando in the original trilogy. While it’s quite likely we’ll see young actors portraying young Han Solo and Lando Calrissian in future spinoff solo films, for now the only place we’re going to see a Lando that looks like Billy Dee Williams doing what Lando does best is right here in this comic and man, it’s so much fun.

While the first issue bounced around a variety of locales, showing that Lando is a versatile operator, this issue remains mostly focused in the cockpit of a mysterious Imperial luxury yacht that Lando, Lobot and their ramshackle crew have heisted. Even sitting in a chair Lando is always firing off on all cylinders, wheeling and dealing while trying to not to get killed in the process. When three Star Destroyers show up Lando reacts with greedy excitement and not fear. He realizes that he has a valuable score on his hands, but has no idea how valuable until towards the end of the issue. Charles Soule does a wonderful job conveying the many sides of Lando’s personality, and it’s possibly not a coincidence that the gambler is juggling some dice on the excellent cover, because like dice Calrissian himself has many, many sides.

One thing that we already know is that Lando is an awesome pilot, or judging from his performance in Return of the Jedi he’s at least a gambling pilot. While Han always talked the big talk it’s Lando who successfully lead the final assault on the second Death Star. In this issue we see more of Lando’s wild maneuvers, lending more credit to his Battle of Taanab exploits that got him a promotion to general in the rebellion. Alex Maleev’s art does a great job conveying the tension in the cockpit, often accented with brilliant reds by colorist Paul Mounts. It’s a difficult task to pull off an exciting space battle in a static medium like comic books, but Soule and his crew do it.

If there’s one complaint I had about this issue it’s the introduction of new bounty hunter Chanath Cha. The sequence where we see him (?) dismantle the operations of the crime boss that hired Lando is very jarring. While I appreciate breaking up the narrative in creative ways I don’t think Soule pulled this off right. It all makes sense by the end of the cutaway segment that we’re being introduced to a badass bounty hunter that the Emperor is hiring to take down Lando and reclaim his spaceship, but honestly it could have been done in a cleaner manner. That’s my only real complaint about the issue though.

With Lando only one step ahead of the Empire who knows when he will trip and fall? Possibly at the end of this issue, as it turns out there’s way more than meets the eye to this luxury yacht that they’re stealing. Also, it turns out they’re not the only passengers on board.

If Rogue One manages to capture the action and suspense of these two issues alone then it will already be an A+ movie in my book!