I mean, obviously our schedules of angsting and everything are all shot to hell, obviously. I’m sending this mostly because I have some quiet minutes in the transit from New Zealand back to Malta – currently sitting in Brisbane in the gallery hosting my exhibition here (how weird to even write that, but whatever). Actually here’s a picture even: 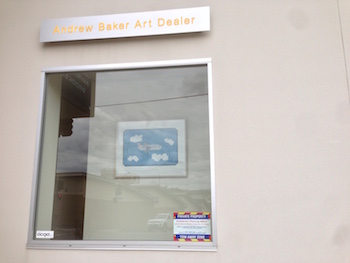 Anyway, Jostle Parent is weirdly mostly done now? I have it out to a bunch of testers now and they’re busy finding all sorts of problems of course. Quite the challenging experience as I’m sure you’re familiar. The most daunting thing so far was just that the game basically was borderline impossible and controller-throwingly frustrating (well, keyboard-throwingly). So I’ve ended up making the game much, much slower.

The other thing, alongside that, is continuing to chew on your very early thoughts about making the kids relatable, which has been interesting. So now they do a few more things (like hug you!) that should help to make them seem a little bit more vulnerable etc. Weird to be doing this kind of stuff…but there it is, that’s games!

I just finished reading (and in some cases re-reading) four of your emails from over the last month, since I’ve been out of touch for at least that long.

First of all, congrats on all the Jostle Parent progress and getting it out to playtesters! I’d love to be one of them if you’re still looking for feedback.  It’s been cool to watch the game grow. Very cool.  That playground video you sent me was really rad. I love how you animated the kids into the toys so they really lock into them.  It adds a lot of life to them, since otherwise there’s no manipulation of their limbs in the way they move and their general existence.  It adds some of that relatability we talked about.

On my end, it’s been good but hectic.  I took a holiday and mostly didn’t work!  Went to London, Paris (as you know), and am now in The Netherlands staying with Adriel Wallick and Rami Ismail. Honestly, I wish I could just stay here for a while, but I think I need to be physically back in LA to rejoin the Hyper Light team.  I feel more productive in a refreshing different space…

On the Kyoto Wild side, I’ve been cooking up a number of things that I don’t really want to broadcast publicly yet, so…end Angst here if we ever publish this!

Unwinnable Presents: Unlistenable Episode 55 – From A to Zed