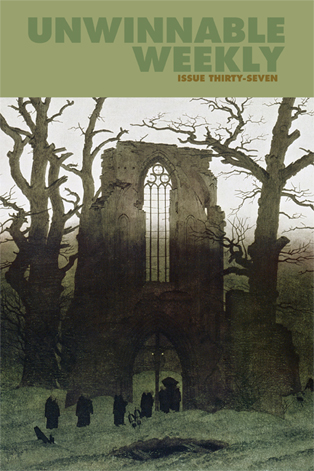 Before there was Kentucky Route Zero, Cardboard Computer was already putting out games. In a way, you could say they were whetting their teeth for a big project like KRZ. The studio’s three previous games – A House in California, Balloon Diaspora and Ruins – are relatively short and feature explorations of design concepts that typify KRZ. At the same time, these games are interesting in themselves, as more than finger exercises that foreshadow the studio’s current project. If you’re itching to find ways to kill time before KRZ Act IV finally arrives, come and join me in exploring this trio of freely available games that went before.

A House in California was released in 2010, and it’s something of an homage to the 1980 game Mystery House. This much is plain from the simple pixel style, but in other respects the game is quite different. It’s not a mystery adventure, but a four-part poetic meditation on what brings a house to life.

The game – developed by Jake Elliott, still without later collaborator Tamas Kemenczy – uses the traditional verb-based interface of point-and-click adventure games but takes the verbs beyond quite literal interactions into a more dreamlike state. Yes, there is a “look” function in the game’s first act, but there is also “remember” and “forget”, “play” and “learn”. The combination of these unorthodox verbs and the objects in the game function as a kind of literary prompts for the game’s writing.

This is most clear in the ways you get around the locations in the four short acts. “Remembering” or “forgetting” an object, such as the Moon, might whisk you to it or back to where you came from. The same applies to “writing” and “reading”, “watching” and “listening”.

The final result is a quaint, serene experience, where a house comes to life through light, bird song and color, then finally goes back to sleep again.

You’ve been reading an excerpt from Unwinnable Monthly Issue 37.

Something Has to Change in Videogames: Everything & Everyone