Noble heroes, dirty Nazis, bloody conflict. That’s the popular memory of World War II. It’s a memory that’s proven financially and politically practical. It’s a reality that helped fund Hollywood, invented new kinds of filmmaking, sparked increasing global conflicts and, eventually, became a staple for the videogame industry when Silas Warner developed Castle Wolfenstein for the Commodore 64 in 1981. Over the next 33 years, the Wolfenstein games have lived and breathed in that red-white-and-blue-tinged memory, marching lockstep alongside other games that set up Nazi soldiers as things to be mowed down in shooting galleries. No matter how paranormal or hyperbolic the series became, its guts always remained rooted in the DNA of a war now mostly remembered through History Channel documentaries.

But 2014’s Wolfenstein: The New Order was something different. Though hardly humanizing its Nazi enemies, it brought a new lens to the war, one that its developer ascribed to the success of Quentin Tarantino’s Inglourious Basterds. Underneath the crowd-pleasing veneer, though, the game has a surprising subtext. As the Nazi empire expands across the globe thanks to catastrophic events creating an alternate timeline, BJ Blazkowicz and his allies no longer fight on the glorious battlefields of World War II. Instead, they take on the hallowed specter of the Vietnam War.

To talk about Wolfenstein: The New Order’s invoking of Vietnam, we need to establish a few parameters that the game operates in. To begin with, it doesn’t evoke the reality of Vietnam – BJ’s conflict hardly has a shade of grey and rarely involves civilian bystanders. Rather, New Order is concerned with Western media’s reaction to the war and how the popular consciousness processed it. While World War II news reports became a propaganda reel of good versus evil, Vietnam was a messy conflict. The concurrence of the Civil Rights movement causing upheaval on the home front and the new importance of TV news created a cultural landscape in flux. Even more confusing were the soldiers returning shell shocked and traumatized in ways that were hard to reconcile with the idea of World War II’s returning heroes. 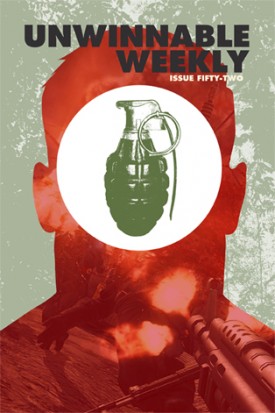 BJ’s constant monologue can be viewed as his grappling with the consequences of the conflict he has found himself in. Physical injuries, the psychological toll of fighting, the unspoken trauma of losing comrade and the ghosts of the world BJ is supposed to be fighting for all haunt him. The story he tells with the help of the player becomes a story of survival both in a physical sense and in a psychic one.

Tim O’Brien’s Vietnam-era book The Things They Carried concerns itself with a similar struggle. The stories these soldiers tell and the kind of truth they carry doesn’t always come from a literal place, nor does it always speak to real events.

There’s a central event in Wolfenstein: The New Order that shapes the narrative – early in the game, Deathshead, the skull-faced Nazi villain, forces the player to choose between the lives of two squadmates – Fergus, an older, scrappy Brit, or Wyatt, a young American private. Unlike so many other videogames that preach the value of choice and consequence, this choice doesn’t carry serious repercussions. It is, however, the only major narrative decision the player has in the entire game. Though it introduces a crucial side character, it also suggests a simple, intriguing question: Which series of events is true? The one where Wyatt lives? Or Fergus?

You’ve been reading an excerpt from Unwinnable Monthly Issue 52.