I’ve been looking forward to this issue of Catwoman for a few weeks now. I had it in my mind that this was going to be a new title, and having wanted to jump into the Catwoman series for a while, I thought a first issue would be perfect. Oops! 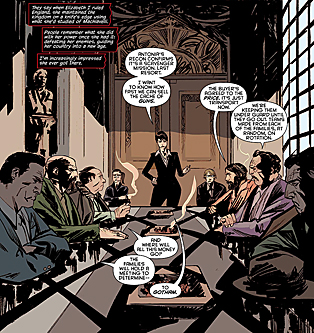 I’ve long thought Catwoman was the Batman villain with the most interesting life outside the immediate Bat-verse (despite what Halle Berry or Michelle Pfeiffer did to her.) Joker and Two-Face are too crazy to hold down their own series; continuing tales would take away from the mysteries in which they need to be shrouded. Penguin… maybe? A little too one-note for anything outside a mini-series (and I say this as a Penguin fan.) When Catwoman re-debuted for the New 52, the cover alone was so over-the-top sexualized that it actually turned me off.

It seems like issue 35 spins out of the Batman Eternal series. Selina Kyle is the head of, and heir apparent to, the Calabrese family (last time I checked, Kyle was an orphan. What do I know? I’m new around these parts). She’s trying to bring some order to the crime families. There seems to be an uneasy truce amongst said families, but the person least accepting of Kyle’s new position is her own consigliere. Seems like we’re in for a slow burn with this arc, which sits fine with me. Also, I like that we get to see Kyle kick some ass.

Genevieve Valentine makes the transition from sci-fi novels to comics as the new writer for Catwoman. I’m not familiar with her work, but I get the feel that her heavy use of dialogue and pacing come from the book world (these are compliments!) On her website, Valentine says she is bringing “a Selina who could be sexy but wouldn’t be sexualized, [a woman] who fought in flat shoes.” Artist Garry Brown and colorist Lee Loughridge work perfectly together evoking the crime/noir essence the book needs.

My biggest disappointment with this issue is that I got the variant cover when I really wanted the regular one. It was the last one my local comic store had in stock, so I wonder how much Catwoman sells in my town. I’ll stick around for a few issues to see where things go. As far as getting some back story, I’ll probably start with Ed Brubaker’s run over Judd Winick’s in the New 52, as Brubaker’s books have been calling out to me for a while. Also, if I stick around Catwoman, I’m probably going to have to dig into Batman Eternal, as much as I don’t need a weekly comic book in my life… . 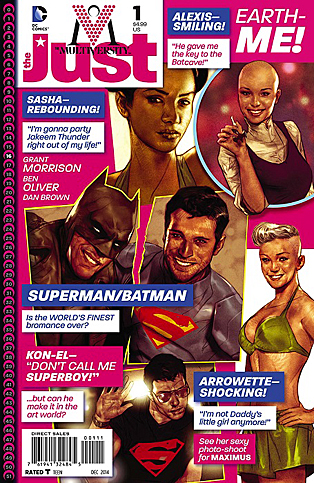 So this issue of Multiversity features Batman, and I thought I’d finally be able to wrap my head around Grant Morrison’s oversized tale. But, no, not so much.

This installment is a little more linear than the previous two, but still leaves readers with major questions like: “Can a superhero commit suicide?” ; “Where do we go from here?” ; “How will this impact the greater DCU?” ; and “Huh?”.

We’re somewhere in the future, possibly. Which version of Earth? Got me. Children of superheroes are now themselves superheroes. They like to party like my Earth’s Millennials. Damian Wayne is Batman and apparently the original Superman is no longer around, and young Superman carries this as a chip on his shoulder.

I like that Morrison keeps with his vision of Damian inheriting the cape and cowl, even if it has to happen in a parallel timeline. Batman flexes his detective skills, seemingly cracking the case, but he’s still a Wayne in that he can barely tolerate his superhero comrades.

Morrison isn’t all serious all the time, but I was thrown off by the whimsical teen-gossip-rag cover and story titled like a Twitter post. Too topical. Ben Oliver’s art shines with his realistic faces and body language (well, as realistic as one can be in a world haunted by evil Superman robots and a shape shifter). Oliver teams with Dan Brown on colors. Their palette features nuanced warms and cools, giving this dark story an ethereal feel.

Each chapter of Multiversity, dubbed a #1, could be its own infinite series. Since we know going in how limited the series is, it can’t be long before things come crashing together with gloriously chaotic and horrible results. 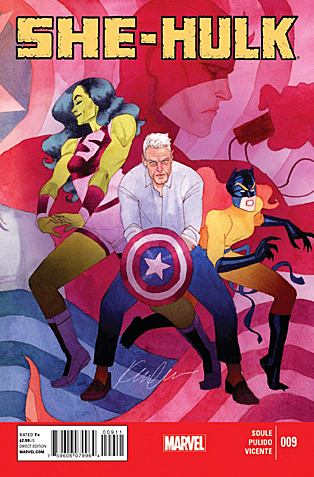 Tensions are high in the courtroom in She-Hulk #9! Steve Rogers, now looking his proper age of 90, is on trial for playing a part in the wrongful death of a peer back in 1940. In Steve’s corner: Jennifer Walters, and on the side of the family suing Steve: Matt Murdock! It’s an issue involving some heavyweights in the superhero community (Captain America, Daredevil and She-Hulk) fighting the legal fight, and if you’re a fan of smartly written courtroom drama then this is the issue for you. Of course, if you’re a fan of your comics exclusively featuring smashing and explosions, this may not be the issue for you.

What’s most fascinating to me about this current story arc is that Steve may have been the reason for this friend of his to be murdered. Up until now, his past has always been squeaky clean – his motive for volunteering for the Super Soldier program purely as a means to serve his country, due to him being ineligible for the draft. Was this the reason, or was it this dark moment that caused him to run away? It adds a new layer to the character, and this is an issue of layers being explored in dialogue. As a longtime comics fan I loved it, which bums me out even more when I read the news that She-Hulk will be canceled as of issue #12. More on that later.

As I mentioned above, the writing in this issue is top notch, with each of the key players captured perfectly. There’s even a cameo by a dupe of Jamie Madrox, who’s now a rich entertainment lawyer in L.A. going by the name of Matt Rocks. What I’ve always loved about this series is Soule’s ability to incorporate so many elements of the Marvel Universe seamlessly, layers of it in fact. I also like comic books that take me more than 10 minutes to get through, which has been the case with this story arc due to the wonderful dialogue and character interactions. Steve remains stoic and firm in the face of these allegations, and Jennifer’s masked frustration at him not allowing this case to be thrown out on a technicality is palpable. Of course, part of the credit for this has to be given to Javier Pulido.

I’ve enjoyed Pulido’s art on this book. His faces are expressive and the images flow gracefully. It maybe a little too cartoony for some, but I think it’s perfect for this quirky book. Combined with top notch colorist Muntsa Vicente, the art and writing really give this book its own unique flavor. Since this is a courtroom drama the emphasis is on the words, the facial expressions and the body language. This team pulls that off perfectly.

Which again bums me out that there are only three issues left. Poor sales have always plagued comic books featuring She-Hulk, which is a shame in this case since there are so many more places Soule could take this comic while having a great time in his travels. A contributing factor to poor sales may have been that some were put off by Javier Pulido’s art, and many (including myself) were put off by replacement artist Ron Wimberly’s art. Another is that Marvel sadly didn’t put much effort into marketing this book. Outside of its launch they kind of let it do its own thing, and this story arc could have totally been hyped as “The Trial of Captain America.” Good for Soule that his Death of Wolverine has been received well, it’s just unfortunate and typical that a stunt miniseries that most likely does not have permanent ramifications will always outsell and sometimes bury the much-needed goodness and uniqueness of a series like She-Hulk.

For a more in depth look into the cancellation, I recommend checking out the recent article, “Why Marvel needs to save She-Hulk from cancellation,” by Oliver Sava, over at the A.V. Club. And while you’re checking things out pick up issues 8 and 9 of She-Hulk, so far an excellent story arc that’s exemplary of what this comic series can do. While it’s going to end (for now), at least there’s still three more issues of comic book fun to be had.

Unmixable: Ghastly Stories From Beyond the Grave