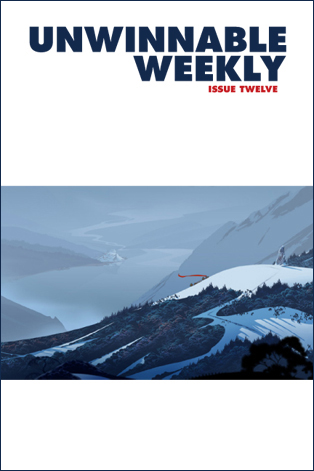 Summer is winding to an end and for the games industry, that means one thing: PAX Prime.

I won’t be one of the thousands of faithful pouring into Seattle this weekend (too many people in one place for my temperament), but lots of our friends will be. Here’s a few you should check out on the show floor:

1. Sanatana Mishra and Tim Dawson will be at the Indie MegaBooth showing off Assault Android Cactus. It’s a madcap twin stick shooter with buttery smooth controls and an all female cast – I got my first look at the game at this year’s GDC salon and have been in love with it ever since. Definitely worth your time. Official site.

2. Also at the MegaBooth is That Dragon, Cancer, by Ryan Green and Josh Larson, which we had at the first Unwinnable GDC salon. It is strange to encourage folk to see such a difficult, serious game in such hectic environment, but if you have the opportunity, seize it. The game’s emotional punch is nothing short of astonishing. Official site.

3. At the Indie MiniBooth, you can play RageSquid’s Action Henk, a physics-based speedrunning platformer set in bedroom full of toys. Playing it over and over again, shaving off precious milliseconds every run has become a Zen meditation since E3. Thoroughly addictive and strangely relaxing when the leader board isn’t making your blood boil. Official site.

4. Our good friend Shawn Alexander Allen will be at the MiniBooth on Friday and Saturday showing off Treachery in Beatdown City. Through several cruel twists of fate, I’ve yet to play it (we need to fix that, Shawn!), but that just makes me more keen to get my hands on it. Don’t be like me, though – play it at PAX! Official site.

5. Also at the MiniBooth is Samantha Kalman’s Sentris. Another game I got a brief glimpse of at the Unwinnable GDC salon and, I mean, have you seen this thing? It is gorgeous. I don’t even want to try to explain what it is (OK, OK, it is a rhythm puzzle music-making game) just go play it, at PAX or on Steam. Official site.

6. Finally, Campo Santo, the Traveling Wilburys of game development, will be debuting their game Firewatch on Saturday at 10:30 AM in the Hedgehog Theatre. It looks super keen. Official site.

And, of course, Unwinnable is made up of party people. The folks who will be at PAX, including Managing Editor Owen R. Smith and Senior Editor Steve Haske, will be hosting a party on Friday night at the Pine Box on Capitol Hill. A good number of the folks I mentioned will be there. Let us know if you are coming by RSVPing on the Facebook event page, and follow updates on Twitter at the hashtag #unPAXparty.

Meanwhile, the latest issue of Unwinnable Weekly is all about war. Jeremy Signor examines the long, punishing road that is The Banner Saga. Joe DeMartino looks at the three decades of Hiroo Onoda’s World War II. Edward Smith ponder politics, war and first person shooters in a world full of too much information. And our resident Space Marine Aurelius Ventro teaches us how to wage war on household pests.

As always, you can send comments to stuhorvath@unwinnable.com.

This is a reprint of the letter from the editor in Unwinnable Weekly Issue Twelve. You can buy Issue Twelve individually now, or purchase a one-month subscription to make sure you never miss and issue!