(Don’t let that exclamation point fool you, the good ship Jostle is definitely mired in some angsty waters right now.)

I like hearing how much you’re managing to get done partly by bouncing off or vaguely evading Need, and how much that totally makes sense relative to what Need is going to be as well. All very fitting that way. Reminds me, too, of this idea of “structured procrastination” where you explicitly create projects that hit some exact sweetspot of “crucial deadline” and “secretly not that crucial” such that you end up avoiding doing them by doing all your real work. Has a pleasant circularity about it. Though it also involves vast swathes of self-deception that really go completely against your Need project, since that basically (as I understand it) examines all these sorts of things quite directly.

Meanwhile, your mystery screenshot of “TOTAL SHIT” feels pretty apt for me at the moment! After getting my doors all nice and working and feeling pretty excited to have a working apartment in the game that looked cool (to me), I turned my attention to some of the more mechanical details. And this meant dealing with a couple of really frustrating realities. One is that, because of physics, furniture can get stuck against a wall and then be impossible to bounce off again by running into it.

Which makes sense, but is annoying in terms of getting things into awkward positions in the world of the game. This is most true when you block a doorway for example. It’s currently possible to completely block yourself into a room and never be able to get out: 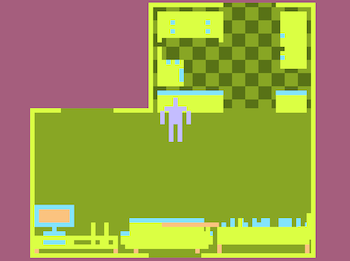 I’ve been agonizing over solutions for a few days. My leading candidate is: if you want to blockade yourself into a room and not be able to leave, be my guest. Not very satisfactory, but may have to do.

The other annoyance is the children. And this is more interesting to me, because I’m trying to strike this balance with the kids being both annoying and awkward (e.g. they get in the way, you can’t get them to go where you want, etc.). But also not so annoying and awkward that you completely hate trying to deal with them and stop playing the game. Right now they seem too annoying. So I am annoyed.

One positive thing is that I implemented lawn mowing, which is kind of satisfying – you just push or jostle the lawnmower around on the grass. (Haven’t yet decided if running it into the children should kill them or not…seems a bit unrealistic, even if I did listen to a band called “Lawnmower Deth” in my youth.)

That’s it. Mostly a frustrating week on the jostling front. That just means it’s working though, right? Right? 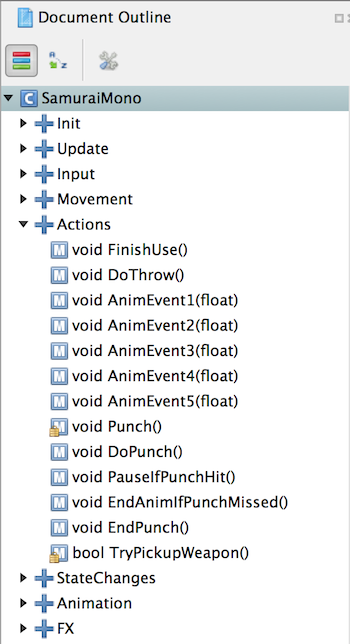 It sounds like you’re leaning into the main mechanical concerns of the game, which I think is terrific.

I agree with your instincts about lawnmower death – seems unreasonably gruesome when it’s not all that realistic anyway. One thing I think might be something to help with the children’s annoyance problem is to give some sentimental reward.  You still need a balance in how annoying they are to deal with mechanically, but perhaps giving them an emotive bounce or sound of occasional appreciation for the players to pick up on would make it all worthwhile. I think that feedback and aesthetic reward can make dealing with challenges, well, more rewarding.

On the Need front…nada! Your points on structured procrastination make me feel like I’m actually doing something right when I avoid the game, provided that I’m working on something else. I am starting to itch to work on Need though, which I suppose is the point– keeping us hungry to work on something.

Oh, I released that video!  It’s a music video about my experience reading internet comments about my games, and I’m rather happy with how it turned out. A fun side-side-double-side project 🙂  https://www.youtube.com/watch?v=et5I6Q1w_w8

I’ve also made some progress on Kyoto Wild! I’ve done a major refactor and just finished it, so it should enable me to actually, finally work on new content for the game. Here’s a not-so-glorious screenshot of code! The main scripts of the game have gone from about 4,000 lines of code to 1,500, and I discovered code regions, which let me label sections of code – voila!

Feeling good. Moving onto content. People seemed to like my video too, so that has felt very good. Off I go!