On the first page of Flash Gordon #3, Dale Arden yells, “Flash!” In the next panel, someone screams, “Aaahh!” Yup, this comic invokes the greatest movie theme song in the whole of American cinema – Queen’s Flash Gordon main title!

If my last two reviews of this book didn’t clue you in, I love this comic! 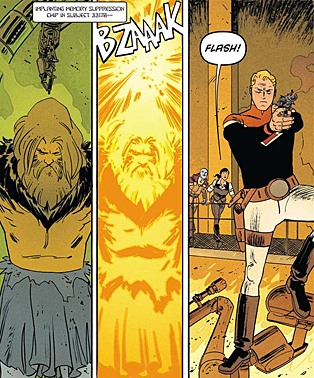 This issue picks up right where the previous one left off. Flash is disgusted by Mongo’s practice of turning innocent Arborians into mindless beast men. So he leaps into the fray, severely damaging the Eye of Ming and setting back beast warrior production by four months. Governor Dron immediately corals Dale, Zarkov and Prince Barin and contacts Emperor Ming.

This is the first time we’ve seen Ming in this series. He’s classic Alex Raymond Ming mixed with some Max von Sydow and peppered with little modern sensibility. He’s evil, but he’s not mustache twirling. Ming is instantly recognizable without falling into any stereotypes other versions of Ming have in the past. Jeff Parker, Evan Shaner and colorist Jordie Bellaire nail it.

Parker and Shaner delve further into Ming the Merciless’ empire, revealing this Ming is a manipulator, as evidenced when he decides to have Flash Gordon fight in gladiatorial combat on Arboria as opposed to executing Flash on the spot. Ming counsels those in his inner circle, too, letting his close subordinates in on a smidgen of his imperial philosophy. He rules by conquest and division.

The heart of this comic is the aforementioned gladiatorial combat. Ming pits Flash against a horde of beast men (all of whom have been offered an imperial rank if they kill the Earth man. Flash channels Muhammad Ali (much to Zarkov’s glee) and starts smack talking the monsters before the big fight. Flash calls a snake man ugly, he threatens to choke a monster with its tail and tells them all that they’re going to swallow their fangs. What follows is damn fun fight scene that advances the plot, sheds some light on just where Prince Barin is leaning and gives us a glimpse of how hated the Mongori Empire is.

I can’t say enough about Jordie Bellaire’s colors on this issue. They burst when they need to, like in Flash’s assault on the Eye of Ming, and are much more flat and subtle when we see Flash in the pens before the big battle. The simultaneously subtle and vibrant colors bring life and vitality to this alien world.

Dale and Zarkov carried a lot of weight the last two issues, but this issue give Flash Gordon time to shine. He’s a classic hero in a comic that feels timeless. Parker, Shaner and Bellaire infuse this series with two ingredients: fun and danger. If the cover to the next issue is accurate, we’ll meet Prince Vultan. Score! 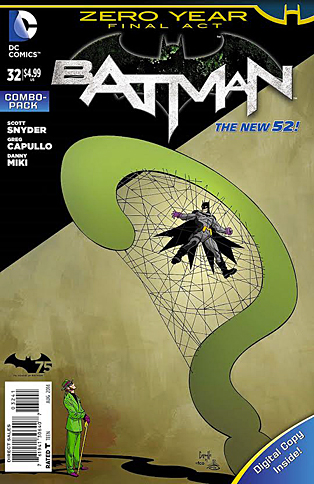 As promised on the final page of the last issue of Batman, we are at the penultimate chapter in the “Zero Year” storyline. Originally, this arc was slated to last 11 issues, but by the end will have lasted 12 (discounting issue #28, a cheap ploy to introduce Batman: Eternal).

I’ve enjoyed “Zero Year” in its entirety, but it’s time to move on. DC isn’t doing itself any favors by forcing Bat-fans to wait until it’s ready to push its next major story line (I don’t read solicitations to avoid spoilers, but it doesn’t take a genius to see that the company’s focus will be on the who/what/how of Robin in the pages of Batman and Robin). Not only does Batman #32 clock in at 20 pages instead of the usual 22, but it spends six pages advertising the new Grayson book, as well as wasting two pages in a glorified advertisement for the Robin Rises: Omega one-shot. Fortunately, these editorial shenanigans don’t diminish the work that Scott Snyder and Greg Capullo have done over that past year on the Batman title.

“Zero Year” is still poised to end strong. The Riddler’s hubris is at its peak, and he’s stymied Batman yet again. Jim Gordon is up a very dirty river without a paddle and Lucius Fox has his doubts. Speaking of hubris, Snyder has characterized the young Batman without it, showing his many faults and making it believable that Batman can fail and that the Riddler will destroy Gotham City.

It will be interesting to see how the events of “Zero Year” will tie into current Bat-tales and inform the greater Bat-universe. Detective has a strong new creative team in the midst of their own world, and Batman and Robin is coming back into its own. The pessimist in me is skeptical, trying to reach for cautiously optimistic in anticipation of Batman #33 in July. 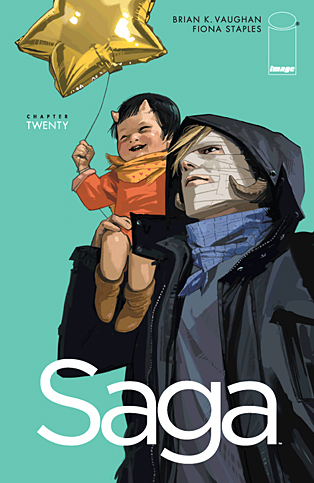 After some intergalactic shit hitting the fan for Alana, Marko and company, it appears that things are finally settling down for them in Saga #20. Given that this is Saga and Brian K. Vaughan is writing, that means you get a robot prince with a TV for a head enjoying some prostitutes in the opening panel, Alana being blasted out of a window by an Amazonian coworker for her job on a superhero soap opera and Marko flirting with a cute bat lady. Oh, and there’s apparently a serial killer on the loose back at the aforementioned Prince Robot IV’s home. Things like this making for a low-key issue are just some of the reasons why I buy Saga each and every month.

Another reason is that Fiona Staples artwork is consistently fantastic every issue. She’s able to wonderfully render so many different worlds and aliens, like the diverse alien cast and crew of the Open Circuit for instance. This gives the impression that there are easily hundreds of issues of story that could be told about this corner of the universe. At this point, she and Vaughan are in such a groove that I could see this comic doing just that. It helps that Image does not seem to pressure them to produce each trade volume at a faster pace, allowing Staples and Vaughan a break between volumes to regroup and plan ahead, like the creators of a TV show. Each issue fits into to the overarching story like pieces in a puzzle, and no issue seems rushed.

While I’m a fan of comic books outside of the Big Two having a sensible finite end (within a reasonable run of a few years or so), I am totally on board for this ride lasting for as long as Vaughan and Staples want it to. It’s been a while since two creators have collaborated on such an enjoyable cosmic yarn that is both epic and intimate. As a result, there’s an ever-growing fanbase that agrees that Saga is one of the best comics out there. Many who I’ve lent a copy of Volume 1 to continue on to Volume 2. If you have a friend or loved one who wants to get into comics or wants to try something different, then I recommend lending or buying them a copy of the Saga Volume 1 trade. From here on out it looks like the universe is only going to get bigger and better, and the more the merrier.

Serenity: Leaves on the Wind #6 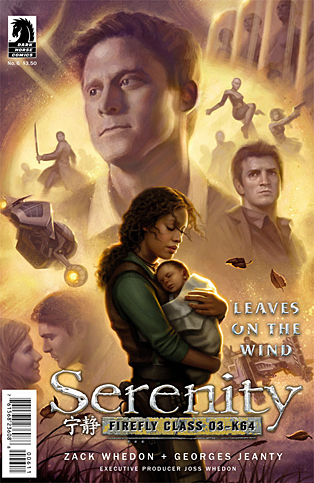 I’m not reading Serenity: Leaves on the Wind correctly. I keep thinking: Did this six-part miniseries roughly equate to one full episode of Firefly, or is it closer to two? Would the show really have been able to afford the huge hoverbike battle depicted at the end of issue #6? Do the characters look enough like the actors who played them in the show?

Issue #6 concludes the Leaves on the Wind miniseries, which follows the birth of Zoe and Wash’s baby, Emma, and Zoe’s subsequent arrest by the Alliance. In trying to rescue her, the Serenity crew becomes reluctantly involved in the New Rebellion anti-Alliance movement. Jubal Early and the Operative made reappearances, and several new characters – almost all women, no less – made their debuts. There’s Bea, the blue-haired freedom fighter who idolizes Mal; Iris, another girl in the same Alliance experiment as River and Kalista, a mysterious Alliance operative who doesn’t really play a big role until the very end of the issue.

Now, with the big Alliance showdown having happened in issue #5, issue #6 is about finally getting around to what the crew was trying to do all along: get Zoe back. The rescue is fairly quick but certainly epic, with most of the badassery, unsurprisingly, coming from Zoe’s side.

The pencils by Georges Jeanty are very fine and detailed, and I love the rich colors and shading by Laura Martin. Sometimes characters’ faces can get distorted from panel to panel, but the one thing Jeanty never misses is the Serenity herself – the iconic ship looks better and better every time it appears. You can tell he agonized over every line and detail.

Leaves on the Wind introduces some serious changes into the Firefly universe, but with all the action going on, including two large-scale rescue attempts, the series doesn’t really give its characters time to grow or change from them. Bea, for example, serves as the main catalyst for Mal to reconsider his position on staying out of the Alliance’s way, but when Mal finally makes one vague promise to “set right what [the Alliance has] done to these people” in issue #5, it’s done in the heat of the moment and we never see him leading up to the decision, much less acting on it. Bea herself never loses her hero-worship attitude toward Mal for his heroism in the Battle of Serenity Valley. I would have also liked to see Bea and Zoe interact, since Zoe, too, was a hero of the Battle of Serenity, but since Zoe is gone for most of the miniseries her role in the civil war is never addressed. The other characters are mostly too busy reacting to the fast-paced plot to have their own moments to shine.

Despite this, issue #6 still leaves time for a weirdly long denouement in which a lot of loose ends get hurriedly tied off. Iris, for example, makes a miraculous recovery, conversing like normal and looking at ease among these strangers. Considering it took River months to be able to hold a conversation that someone else could understand, Iris’ recovery seems extremely rushed, but hopefully she’ll appear again in a future Firefly comic.

And that’s the issue with Leaves on the Wind right there: it’s a miniseries. It only has six issues to tell one small story, but as a Firefly fan I’ve already committed to caring about the entire ‘verse, and I want more. There’s yet another reason why I’m judging Leaves on the Wind more harshly than it deserves: because I love it. I want more. And though the series ends on a promising note, there’s no assurance that I’ll get it.