Flash Gordon #1 spins out of Dynamite’s King Features series, Kings Watch. In that series, the Phantom, Mandrake the Magician, Flash Gordon and company repelled Emperor Ming’s attempted invasion of Earth. While the events of that series are briefly mentioned, this is a first issue in the truest sense. “The Man from Earth Part 1” begins a year ago and sets up Dale Arden, Dr. Zarkov and Flash Gordon over the first five pages. Page six? It’s the present day and our three heroes are flying a space plane over the planet Mongo while Emperor Ming’s forces are in hot pursuit. 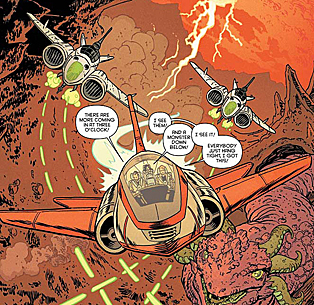 The first issue is a little light on plot, but more focused on character building amidst swashbuckling action. Parker’s script moves Flash, Dale and Zarkov all over the universe and shows a lot more than it tells. Flash is a stupendous athlete, Dale and Zarkov are not. Flash isn’t intimidated jumping off giant tree branches and swinging on giant vines, but he has to slow himself down so the fit Dale and the probably alcoholic Dr. Zarkov can keep up. Dale’s wit is just as sharp, and she winds up talking the team out of an awkward situation. Parker’s script, paired with Shaner’s art, moves at a fast pace but opens up numerous worlds in the process.

I first came across Evan “Doc” Shaner’s art when someone retweeted an image he drew of the X-Men’s Beast. Not too long after, I read his story in Romance Double Feature. Last year, he drew Blood Brothers for Dark Horse Comics, a Deadpool annual and some Ghostbusters comics. I really dug those comics. Shaner’s clean style suits numerous genres, but after reading Flash Gordon #1, one thing became abundantly clear: Flash Gordon is the book Evan Shaner was born to draw!

It’s a comic full of alien worlds, space ships and big monsters. Shaner’s on fire and Jordie Bellaire’s colors add a depth to the story, making the alien worlds look simultaneously familiar and alien. It’s a stunning re-imagination of the character. So long as this team is on the book, I’m in for the long haul. Hail, Flash! 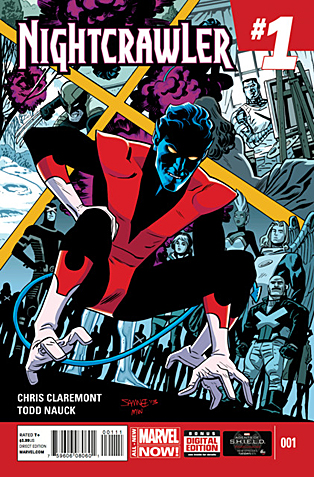 A few years back, I rage quit X-Men comics when I found out they killed off my favorite X-Man, Nightcrawler. It was an immature reaction. After all, he’s a fictional character. I have real things to worry about like interpersonal relationships, living my life and having a job. Nonetheless, I had a big emotional reaction to Nightcrawler’s passing and a lot of that had to do with how Chris Claremont wrote the character for hundreds of comics over decades. So, it’s only fair that he write Nightcrawler #1.

I have complicated feelings about this comic. On one hand, Nightcrawler is one of my all-time favorite comic characters. Todd Nauck is the perfect artist for this book. He draws an energetic and acrobatic Nightcrawler. Every panel moves and serves the story. Rachelle Rosenberg’s colors are top-notch – this is the best Nightcrawler’s looked since long before his demise. On the other hand, the comic is a bit overwritten and the issue’s villain feels more like a MacGuffin than a character.

My problem with this issue is that is feels very “by the numbers.” There’s a lot of exposition that covers up the artwork. It’s not as bad as the exposition in, say, “The Dark Phoenix Saga,” but it’s still there and it clutters up the art that does a fine job of telling the story. Kurt and Amanda Sefton fight a super-strong, armored mystery man. The whole setup feels a bit stale. However, the art in this book is worth the price of admission alone, and Chris Claremont is the kind of writer that has played the long game well. He also knows these characters inside and out.

There are some great character moments in this comic, including a nice scene between Kurt and Rachel Summers where they reminisce about their time in Excalibur. Kurt and Amanda Sefton get to reunite (though he breaks into her apartment, which is more than a little creepy). Claremont writes some exciting action scenes for Nauck to draw. The acting in the art is a lot of fun. The writing in the book just felt a little uneven. I am still along for the ride. If you’re a fan of the fuzzy blue elf, I’d recommend snagging this issue, too. 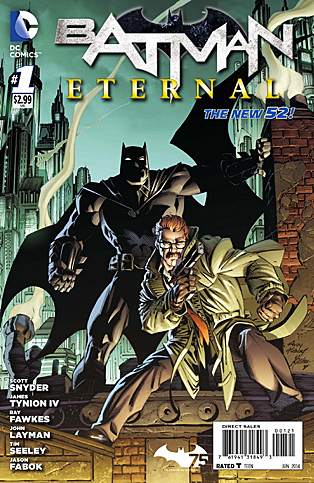 DC’s long-awaited weekly ongoing series Batman Eternal starts near the end: a bare-chested, unmasked Bruce Wayne lashed to a broken Bat-Signal, a bleeding bat-logo cut into his chest. “Watch as you lose everything,” a disembodied voice narrates as Gotham burns in the background.

Created to commemorate Batman’s 75th publishing anniversary (as well as to make DC a ton of money, if we’re being honest), Batman Eternal seems like it’s looking to be the New 52’s Gotham Central, Gotham Knights and Streets of Gotham all in one. Writers Scott Snyder and James Tynion IV, with artist Jason Fabok, hit the ground running with an issue that balances action, mystery and character drama.

After that somewhat cheesy first page (hasn’t Bruce “lost everything” like a zillion times before?), Batman Eternal immediately tightens its scope to deliver a tense, character-driven story focusing on the Gotham police department under Commissioner Jim Gordon. Jason Bard, a Gothamite from the preboot, makes his New 52 debut as a just-arrived transfer from the Detroit police department (we first see him talking to his mom on the phone – I already like him). Maggie Sawyer and Harvey Bullock round out the supporting Bat-characters featured in Batman Eternal #1.

The issue jumps into a seemingly typical day in Gotham, with Batman and Jim Gordon teaming up to fight Professor Pyg – Batman kind of makes a few puns, Jim rescues a few kids that you kind of know weren’t really going to die anyway. But then Batman Eternal ups the ante with a terrible disaster apparently caused by Jim Gordon himself.

With Batman, Jim Gordon, Harvey Bullock and Jason Bard running around in the same issue you’d think you’d be seeing a lot of copypasted, strong, white grizzled jaws, but Jason Fabok does an excellent job of giving every single character a distinctive face, expression and even posture. In these sometimes elaborate set pieces – crazy plane hangar, stupendous train crash, all of Gotham burning – it’s the characters who really drive the story.

But this issue’s real focus is on Bruce and Jim Gordon. Fabok’s rendering of their body language, combined with Snyder and Tynion’s mastery of these characters’ voices, dovetail to give us two characters whose friendship is about to undergo its first true test. The moments after the crash even contain a beautiful twist on the “turn-around-and-he’s-gone” trope that is almost – not quite, but almost – overdone in Batman stories.

Since its launch over two years ago, the New 52 has tried – sometimes less than successfully – to strike a compelling balance between creating new stories and bringing in enough of its past to keep the characters and world consistent. Batman Eternal #1 strikes that balance better than most. If you’re a fan of the Bat-Family, this is definitely a series to watch. 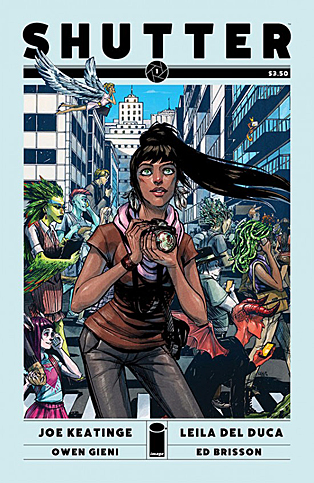 Kate Kristopher comes from a long line of adventurers. Portraits of her father, grandmother, great-grandmother and great-great-grandfather’s exploits cover the walls of her family’s mansion. On her seventh birthday, her father took her on a trip to the moon.

Kate was bored. “Can we go home now?” she asks.

Those are the very first words of Shutter #1, a new original comic written by Joe Keatinge and illustrated by Leila del Duca. It’s a strange tone to set for the first issue of a new original comic series. Kate’s world is strange and fantastic – in her New York, for example, winged and scaled beings are as common a sight as humans – and her life has been even stranger than average.

But even as readers marvel over Shutter‘s world (which del Duca brings to life with bright colors and incredible detail), Kate remains largely unmoved. She was raised in a family of eccentrics and explorers. Even at age seven, and especially after a 20-year time skip, she’s seen it all. She’s bored. Even an attack by cool purple glowing ninjas does little more than piss her off.

Shutter feels a bit like the classic indie adventure game Dreamfall: The Longest Journey, from Kate’s ennui to the reality-with-a-twist world she lives in – even right down to her anthropomorphic cat-slash-robot assistant.

Reading about a fascinating world through the eyes of a bored protagonist may create a sometimes-jarring dissonance, but it also creates a character who is both experienced and has plenty of room for growth. And she may not be the most relatable protagonist, but that makes the little moments that slip through her jaded facade all the more moving. As a child, she displays anxiety over the pressure to live up to her family’s expectations, and as an adult she misses her now-deceased father, even wistfully remembering the moon trip she had sulked through 20 years before.

Shutter also succeeds at something an extraordinary amount of modern fantasy and science-fiction still struggles to do: it creates a world that does not reproduce the social systems and biases of our own. The Kristophers trace their family history through both the male and female lines without raising an eyebrow. Brown-skinned Kate has a blond, pale-skinned father. A little boy unabashedly fanboys over her. The people around her are of many species, as well as races and genders. Add to that the cyberpunkish technology and mythical creatures, and that’s a world I definitely want to live in, no matter what Kate says.

Shutter #1 isn’t quite like anything else being published right now. It’s quirky, bold and colorful, and its new take on the reluctant hero is interesting almost in spite of herself. Kate may not be excited about the unfolding story in Shutter, but I am.