I’ve dropped in and out of reading The Walking Dead several times over the years. At first, I stopped reading just after the prison arc due to financial reasons. By the time I was in better financial waters, so much time had passed that the idea of catching up felt daunting. At that point, the comic was a soap opera. I knew I’d missed a lot, but it didn’t feel terribly accessible (kind of like X-Men comics circa 2000). I moved on. 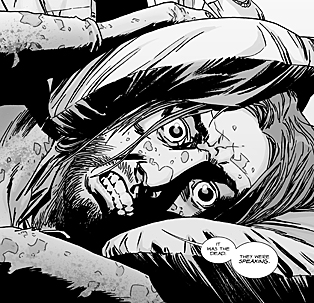 A friend caught me up on the series eventually. I found out what happened to poor Dale, how Carl lost an eye and learned about new characters like Rosita, Abraham and Eugene. Ever since, I’ve picked up a stray issue or two of the comic every few months. The current storyline, “A New Beginning,” is the first arc I’ve read every issue of in years.

The story takes place an indeterminate number of years after the end of “All Out War.” The survivors live in three different colonies that are all connected by a protected system of roads. Thanks to Eugene, they have found a way to herd zombie hordes away from colonies, build a windmill and start baking bread again. For the first time since Rick woke up alone in the hospital, it feels like the survivors have a chance of building a whole new world.

The last three issues focused on introducing Magna, her group and the Alexandria Safe Zone’s new status quo. This issue focuses on the Hilltop Colony. Maggie’s in charge at the Hilltop. We meet her and Glenn’s son, Herschel. The Hilltop colonists are building a windmill. They have a big wall and armed guards. In a world where the dead eat the living, it makes sense that a successful village would look like a fort. Inside is a fully functioning town. However, Adlard is careful not to make the Hilltop look menacing. It feels as warm as a place can in a world where the dead rise. Things are looking good for humanity for most of these issues. At least, they are until once scene – when the zombies start talking to each other.

Kirkman and Adlard add a potential new menace to the post-apocalyptic remnant. While Rick, Maggie, Andrea, Eugene, (presumably Michonne) and company have been building a better world, it seems the dead have evolved, too. This issue only gives us a glimpse of that evolution as two survivors hide from a herd of walkers. While staying out of sight, they both hear some whispers in the horde. It’s a brief moment, but it has the potential to change the series and give another zombie movie classic, Return of the Living Dead, its due. I really hope this isn’t one of Kirkman’s infamous serial cliffhanger red herrings.

The best zombie stories serve as metaphors for something in our culture. Night of the Living Dead is about race relations in America. Dawn of the Dead is about rampant consumerism. Shaun of the Dead is about relationships. 28 Days Later is about the cruelty of animal testing. The list goes on. The Walking Dead, though? At its best, the series is a character study about survival and what it means to be human (much like Romero’s Day of the Dead). At its worst, it borders on self-parody (see Glenn’s death). Thus far, “A New Beginning” feels like it’s The Walking Dead at its best. Kirkman and Adlard have an opportunity to explore a larger metaphor. I hope they take advantage of it. 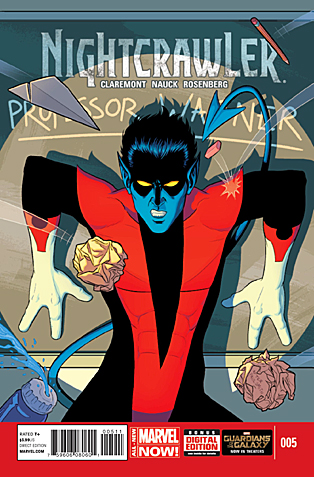 When I wrote about Nightcrawler #3, I mentioned how I found Nightcrawler’s characterization to be what attracted me to this comic so far, as opposed to the stories themselves. After issue #4 ended with what I felt was an unearned (and sadly typical) fridging, it’s nice to read the Nightcrawler issue that I’ve been waiting for. He’s allowed to breathe and spend some time on the Jean Grey School for Higher Learning campus, interacting with the past, present and future of the X-Men throughout most of the issue.

Claremont, Todd Nauck and colorist Rachelle Rosenberg really knock it out of the park in this issue. Quite literally in the opening pages, in fact, as we see Kurt and the BAMFs play some classic baseball, X-Men style. There are some wonderful reflective and nostalgic moments in this issue, and the growth that Kurt makes by the end is well-earned. Kurt Wagner is the heart and soul of the X-Men, and up until this issue he had to recover that temporarily lost heart and soul in his friends, and in the hope and education he will provide for the students of the school.

Nobody but Chris Claremont could and should write this issue, where we spend so much intimate time with the man Kurt Wagner, aka Nightcrawler the adventurous swordsman. Nauck’s art evokes the classic look of Byrne or Cockrum in flashback, but he maintains his own distinct style in the present. Rosenberg’s colors really represent the darkness and light of this character well, not to mention the purple weirdness and humor that is quintessential Nightcrawler.

I always like X-Men issues like this, where we can take a break from whatever good or bad megastory is happening to check in with (hopefully) consistently well-written characters. For the most part, Claremont has never lost sight of this. After reading Nightcrawler #5, I came away with a satisfied feeling that X-Men comics haven’t provided me with in a long time. No matter what happens going forward in this series, at least I have this issue to remind me that X-Men comics still have the ability to do that. 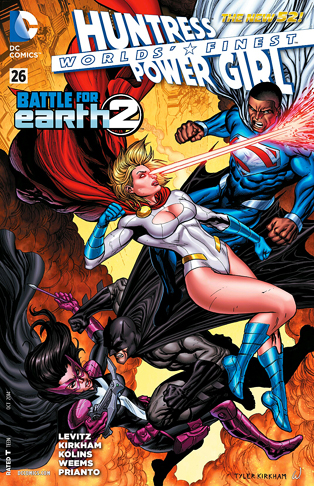 Worlds’ Finest #26 didn’t have an easy task. Now that main characters Huntress and Power Girl have crossed the dimensional barrier from Earth-Prime back to their home world of Earth-2, writer Paul Levitz had to create an ending of sorts to mark the girls’ last issue as the titular finest in the world.

But Levitz can’t really write an ending, since the upcoming Earth-2 weekly comic book series will directly continue Huntress and Power Girl’s story. Levitz can’t even end the Worlds’ Finest series itself, because the book will continue for several months as a place to tell more stories of the Batman and Superman of Earth-2 (Huntress’ father and Power Girl’s cousin, respectively).

The result is that Worlds’ Finest #26 has a sort of squished feeling to it. The story picks up where #25 left off, with Kara (Power Girl) and Helena (Huntress) traveling from Earth-Prime (the world where most of the New 52 takes place) back to Earth-2 (the place where the eponymous Earth-2 series takes place). But they don’t get to do much more than fight some bad guys a little bit and talk loudly about the recent events that took place in the previously released Earth-2 #26.

That said, I liked it more the second time I read it. Helena, in an interesting twist, did not want to go back to Earth-2, which she claims is nothing more to her than the place where her parents and friends died. Upon returning to see the world just as war-torn as when she was thrown out of it five years before, Helena tears up, and in an unguarded moment lashes out at Kara for bringing them back. She then quickly composes herself and charges into battle next to her friend.

Since the series started, my favorite thing about Levitz’ World’s Finest run has been the small character-focused moments between Helena and Kara in almost every issue. This was that moment.

The issue also continued a subplot about a young scientist named Tanya Spears, who helped Huntress and Power Girl get back to Earth-2 and now, still on Earth-Prime, appears to have acquired Power Girl’s strength and invulnerability. Will she be the new star of Worlds’ Finest now that Huntress and Power Girl are gone? Though that sounds like a cool idea, we still don’t know much about her – and apparently the artists don’t, either. Tanya has different clothes, hairstyle and eye color than she did in the previous issue, which directly continued into #26.

I’m no artist, but I feel like pencilers Tyler Kirkham and Scott Kolins might have benefitted from looking at some actual women athletes and weight lifters when drawing Kara, Helena and Tanya. The very first page depicts a side profile of Kara in her Power Girl garb, looking like she has a gravity-immune water balloon tacked to her chest. Elsewhere, her famous “boob window” is so low that it would definitely have earned the book an M rating, were her modesty not saved by the fact that Kirkham and/or Kolins apparently don’t know where nipples are.

I get that this is supposed to be hot. But is it hot? Is it? (Genuine question.)

From 1941 to 1986, DC Comics published an ongoing series called World’s Finest featuring Batman and Superman. In 2012, it relaunched Worlds’ Finest (note the apostrophe movement), starring, not the flagship heroes, but those heroes’ female sidekicks. From an alternate dimension. One where that Earth’s Batman and Superman were dead. If that isn’t the coolest premise for a comic book ever, I don’t know what to tell you.

So I’ll be sad to see Power Girl and Huntress depart Worlds’ Finest. Issue #26 may not have been the send-off readers like me feel they deserved, but it’s one the writers needed to tell as they set the stage for these characters and their next round of stories.