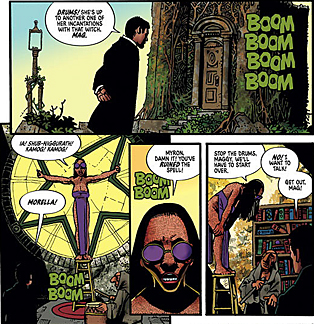 In Corben’s take on “Morella,” the title character is learned in mysticism and witchcraft as opposed to German philosophers Fichte and Schelling like her literary counterpart. The black magic in this tale is more overt. Instead of a reference to Presburg (Morella’s birthplace and Poe’s clever way of insinuating a black magic tie), we see Morella outright performing a spell on the comic’s second page. Her husband, Myron, grows tired and wants a divorce. Instead of dying and willing her soul into their newborn daughter, Morella instead creates a “daughter” from a previous relationship. So taken with his stepdaughter’s beauty, Myron begins a sexual relationship with her that is, of course, interrupted by the local judge and priest. It’s just a wee bit different than Poe’s short story, right?

In “The Murders in the Rue Morgue,” Corben’s adaptation of the classic tale is particularly brutal, though surprisingly similar until the final act. Corben is in his proverbial element while Dupin and the police investigate the murder scene. It’s savage and gruesome. Madame L’Espanaye’s head is clearly cut and torn from her neck and Mademoiselle L’Espanaye’s corpse is contorted and ragged like a discarded child’s plaything. It’s grotesque and classic Corben. As the story continues, Dupin sets his trap for the killer by placing an advertisement in the paper. And this is where the story diverts a bit.

In Poe’s original story, the killer is revealed to be an orangutan that a sailor captured in Borneo. The orangutan accidentally killed Madam L’Espanaye while imitating the sailor’s morning shaving routine and then freaks out at the sight of blood and winds up killing her daughter, too. It’s horrible, but it is arguable that there is no malice in the act. You can’t say the same thing about Corben’s orangutan. The beast was tortured by the sailor. And the sailor? He is a grade-A scumbag who deserves the savage beating the criminally-insane orangutan ultimately gives him.

Edgar Allan Poe’s Morella and the Murders in the Rue Morgue is pure Richard Corben! Whether drawing Mike Mignola’s Hellboy, Harlan Ellison’s Vic and Blood or Edgar Allan Poe’s C. Auguste Dupin, Richard Corben’s aesthetic and storytelling chops are unmistakable. This book flows with such an ease that the reader is caught off guard by horrifying images of a bloody straight razor or a crazed orangutan with gnarled teeth!

Where else are you going to see two masters of horror defy the grave and join forces? 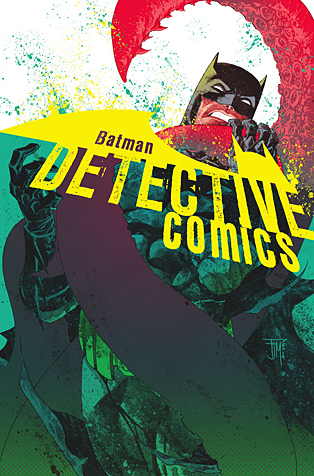 I’ve been seriously considering dropping Detective Comics from my monthly buy list. Detective and Batman are the flagships of the Bat-empire, the constant titles, the two I go to first when I take my periodical sabbatical from comic books. But each month, Detective ranks lowest in quality of my Bat-purchases.

Now there’s a new team at the helm of Detective. Brian Buccellato and Francis Manapul are really turning things around. The title lacked oomph out of the New 52 gate under Tony Daniel (Mr. Toxic, anyone?), and John Layman wasn’t any better (Wrath was worthless; the “Gothtopia” storyline had promise in theory but failed miserably in execution.) Jason Fabok’s art never sat right with me (his depiction of Batman’s nose bothers me more than anything, and his faces often had strange proportions and unrealistic contortions.)

As for this book’s art, the colors are fantastic, with a watercolor-esque vibe. Both the cool and warm tones actually add to the overall darkness of the story. Page layouts are creative, effectively handling scenes that are too big for one panel, and saving splash pages for real emphasis.

I’m not sure how long the current story (“Icarus”) will last. A new wonder drug has made it to Gotham from Central City and the land of the Flash (like the above-mentioned creative team.) Issue 32 slows things down a bit, but the cliffhanger ending promises big things for the next chapter. Batman does tangle with a giant squid, which has the makings of an Adam West adventure, but Buccellato and Manapul keep things to the right side of the silliness line.

I’m excited to see what the two have in store for the rest of this arc and what they’ll come up with next. Hopefully DC keeps this top-tier team on the Detective title for the indefinite future. 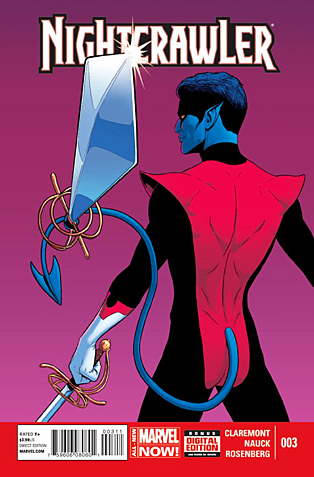 I want to be more excited about this series. While I feel like the many current X-Men comics have drifted away from me, this seemed like a good way to jump back in. For starters, it has Chris Claremont writing it, and you can’t get more classic than that!

But three issues in and I only feel invested in Nightcrawler doing Nightcrawler things and little else about the overall plot involving the larger X-Men universe. I think it’s because so much of the overall X-Men story needs to be explained every time before it can move forward. Chris Claremont, for all the good that he’s done for the X-Universe, is also partially to blame for the murky and complicated X-Men backstory.

Ian mentioned in his great Amazing X-Men review from last week how wonderful the reunion scene between Nightcrawler and Colossus was. This issue features another heartwarming reunion over a six-pack between Nightcrawler and Wolverine. Moments like these will keep me coming back to each issue, not so much Storm and Beast being imprisoned in printing paper by the horned sorceress (and Kurt Warner’s adopted mother) Margali Szardos. Yes, that happens in this issue. Not only that but with any X-related comic I always fear the impending crossover ruining the story I’m reading, because I simply don’t have the money to buy four or five more comics a month. So far it’s just evil robots, which is fine because mutants and evil robots are peanut butter and jelly for an X-Men comic.

With only three issues down anything can happen going forward. Claremont can still deliver with X-Men character moments since he helped co-create so many of them. His stories are what worry me, though, ever since his dicey run on Uncanny X-Men back in the ’00s. Todd Nauck has been doing great work with the art, at times evoking the late great artist and Nightcrawler creator Dave Cockrum. Rachelle Rosenberg has also been wowing with her dynamic coloring. So long as Claremont can keep his impulses at bay, Nightcrawler could be one of the most fun comics on the rack. As of now, it’s still working its way to that point, one Bamf at a time. 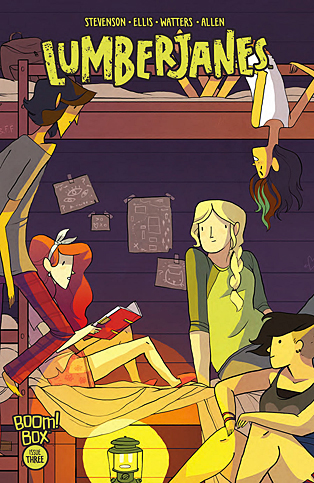 The adventures of Mal, Molly, April and Ripley continue in Lumberjanes #3, in which the girls find themselves trapped in a mysterious cave beneath the forest, far away from the Lumberjanes’ summer camp.

As this is the third issue in a book with five main characters, we’re still learning each Lumberjane’s personality, skills and relationships. But as they move through the cave, every girl gets a chance to use one of her unique skills to solve a problem. It’s slightly contrived, and some of the obstacles work better than the others, but the story tackles this “cave of trials” trope with the same great balance of heartfelt enthusiasm and easy silliness.

It’s the same with the dialogue. The Lumberjanes talk the way most Tumblr posts read: pop culture references, lines like “the most bad thing,” puns like the “Everything Under the Sum” badge or even the book’s habit of using all caps and no punctuation to represent a line spoken loudly and without premeditation. That’s exactly how young Tumblr users – usually members of one Tumblr “fandom” or another – talk to each other. It’s a slang expressly crafted for being both intensely excited and humorously self-aware, and it fits perfectly in Lumberjanes.

I’m a big fan of stories with ensemble casts rather than a single main character, as they open up even more opportunity for interesting interactions. The girls aren’t all equally best friends – Jo and April appear to be the leader and the lancer respectively, and Mal and Molly obviously have mutual crushes on each other that result in adorably awkward interactions to which anyone, gay or straight, can relate. But the book also leaves time for little character moments between the other girls, too.

The art looks simple, with mostly solid colors and simple lines, especially on characters’ faces. But the backgrounds are always detailed, and I love that each character is drawn with her own unique facial features, expression and body type in every panel. My one quibble is that the girls’ heights are often inconsistent, especially April’s.

Before reading Lumberjanes, when I thought of summer camp stories, I thought of weird, kind of awkward ’90s movies. Miss Quinzella Thiskwin Penniquiqul Thistle Crumpet’s Camp for Hardcore Lady Types is a summer camp for modern readers of any age or gender.

A Game of Casting