I know I’ve reviewed the The X-Files: Season 10 a lot, but I couldn’t pass up an opportunity to review Joe Harris’ monster-of-the-week issue. Fans of the series know that The X-Files basically had two modes: canon/mythos and MOTW. Many of the MOTW episodes were entertaining, but nowhere near as engaging as a mythos-relevant episode. 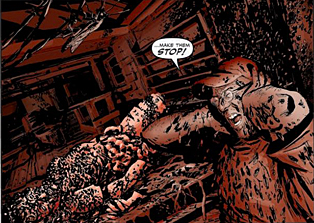 The same can be said for The X-Files: Season 10 #9. Harris packs a pretty icky story into 22 tight pages. The result is that the issue fails to deliver on the creep factor of its premise.

Basically, Mulder and Scully encounter a man who claims to be a slave of the “Chittering God,” a controlling group of cockroaches who force him to commit murder in order to give them a sacrifice. The idea is gross enough, and Harris throws in a few moments that made my skin crawl. But the quickness with which he wraps up the story dampens the climax and keeps the story from really reaching a level of eeriness seen in such episodes as “Squeeze” and “The Host” (the latter’s villain has already made an appearance).

The issue also misses out on a great opportunity by underutilizing Greg Scott whose ultra-realistic artistic style could have really aided the spooky timber of the issue. Art Lyon’s colors and Robbie Robbins’ lettering both add to the freaky visuals, but again, the quickness of the story means that these elements are here and gone before they ever have a chance to impact the reader.

The X-Files: Season 10 #9 has all the pieces it needs to be a great entry in the series, but its truncated story keeps it from being so. But one miss among a slew of hits is not a sign of things to come, just a writer keeping up with the traditions set before him. 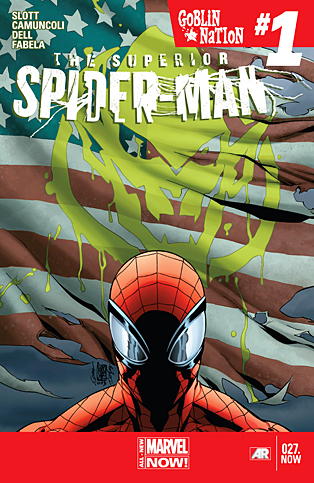 For lack of a better explanation, this is a comic that doesn’t need to happen. Dan Slott has built up the Goblins in his world, and now their conflict with Spider-Man is coming to a head in “Goblin Nation.” But a lot of this issue keeps Slott from doing what he set out to do, and that’s to give readers a new Spider-Man/Green Goblin story. Because from what Slott presents here, I think we’re about to see Otto’s fall from grace.

And it looks disastrous.

Where the issue works best is at the end when Otto finally confronts Norman Osborne.

Slott gives readers a pretty cool surprise, one that shows us how much smarter Otto is than his foes (and sometimes partners), when Osborne lures Otto into his secret hideout.

But the buildup to this moment is frustrating. Slott opens the story 31 days in the future, so we can see the havoc Norman has wreaked. But this kind of introduction is really unnecessary, because Otto isn’t Peter. So if he loses, who cares? Plus, the Peter moments we do get are still him struggling in the Mindscape, a place where his consciousness exists but cannot escape.

Much of the issue touches upon previously established conflicts, as if reminding people that Otto has a lot going on in his life. But it slows down any tension he builds from the beginning, because even if the story’s showing us Otto’s failure, it’s still showing that he was beaten by Norman Osborne. I want to find out how.

Where the issue shines, though, is in Giuseppe Camuncoli’s art. His designs are sharper than normal; characters are more detailed and the finishes on the page give a cleanliness to the art that makes it visually appealing. Camuncoli’s Green Goblin is awesome, and his points of view for the Otto/Norman showdown give the story its first real traction.

The Superior Spider-Man #27 isn’t a bad issue, but it stagnates a story that was building its tension. The final third of the comic brings some of this back and makes up for the earlier part of the issue (a little anyway). But now that the exposition’s out of the way, hopefully Slott can deliver on the story he’s built. 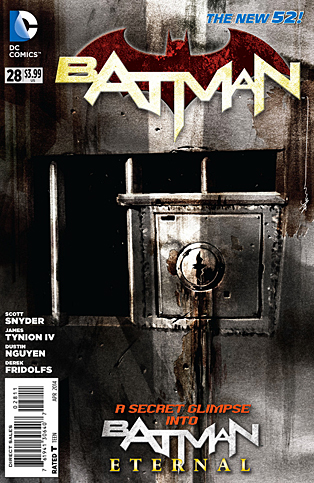 Bannen’s Book of the Week: Scott Snyder has done it: he’s brought back the sidekick.

Breaking from “Zero Year,” Scott Snyder introduces his next project, entitled, “Batman: Eternal.” But he does so by giving a classic Batman and Robin story, except now it’s Batman and Bluebird (if you’re skeptical, don’t be; the character is awesome).

Working alongside Talon scribe James Tynion, Snyder develops his techno-punk girl Harper Row into Batman’s new number two. The addition gives the comic a bit of levity and flash, two things Snyder’s run has been missing in the wake of “Death of the Family” and “Zero Year.”

Snyder and Tynion don’t bother with the semantics of Harper’s change to Bluebird. Instead, they show readers how the two operate, as they pummel their way through a nightclub full of thugs. Bruce’s interactions with Harper are similar to his with Tim Drake. She lacks Jason Todd’s impulsiveness and Dick Grayson’s intensity and instead falls neatly alongside Batman’s most relatable partner.

The slick writing also gives the issue a smoothness. At no point does the story drag or catch. It’s easily one of his best structured both in terms of its plot and characterization.

I don’t know what Snyder and Tynion have in store for “Batman: Eternal,” but this introduction is enough to pique my interest.

And I want to see more Harper. She’s a fantastic choice to be Bruce’s right-hand gal. The writers give her confidence and cleverness so that she foils Bruce, but more so in how light her personality is compared to his.

Plus, Dustin Nguyen’s angular style gives characters a look like they’ve been chipped from stone. It’s a unique and appealing artistic style, miles away from Capullo’s equally impressive litheness. Everything about the issue is stylized, which makes reading it all the more fun. It breaks up the expected visuals and adds more power to Bluebird’s first appearance.

I liked “Zero Year,” but “Batman: Eternal” is already a better story. Seeing Bruce’s early days is cool, but seeing him with Harper is even cooler. She’s a fantastic addition to the Bat family, and I hope their time together will be as equally entertaining as this first issue suggests.

Am I the Novelist?