It is the week of the Game Developers Conference in San Francisco. You’ve been invited to a party on the last evening of the show. It’s the gaming salon that Unwinnable throws every year at their rented house in the Haight. You figure the evening will be a good chance to wind down after a grueling week of work, drinking and panels. The day of the party you get a text message from Stu Horvath. “If you have a Netrunner deck you might want to bring it tonight.” You shove your deck into your bag and don’t think much of it – there’s been a lot of Netrunner happening at GDC this year.

The salon seems uneventful at first. You quickly meet up with some friends to share some stories and blow off some steam. Drinks are drunk. The crowd is much the same as every other get-together you’ve been to this week save for two exceptions. A pair of imposing men in dark shades and well-kept, matching suits stand against the wall, scanning the party-goers with jaws clenched.

And then there’s the weirdo in the leather trenchcoat. This is GDC after all. The guy could be a developer with one foot still squarely in the ‘90s. But you don’t think that’s it. The dude seems cagey.

IF YOU PLAY CORP KEEP READING – RUNNERS SKIP AHEAD 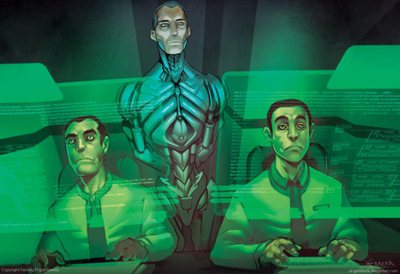 You’re about to strike up a conversation with the Mondo 2000 dude when you find yourself in the shadow of the two burly men. Up close you notice that they’re wearing holsters under their suit jackets. There’s are clear bulges where you imagine guns to be. The one who’s job it is to talk interrogates you. “Do you have it?”

You panic a little when the other one reaches into his coat. He produces a business card with the logo of  the corporation you play in Netrunner. Your brain begins to spin up to speed.

IF YOU PLAY RUNNER BEGIN HERE – CORP SKIP AHEAD

Before you gather the courage to chat up the man in the leather trench coat he makes his way towards you. His eyes dart about. If you’d met him on the street you’d expect him to hit you up for cash or try to sell you some weird drug. But instead he greets you as if he knows you. “It’s all set up,” he says. “Very private. All the bandwidth you need.” You narrow your eyes, about to ask, “Do I know you?” 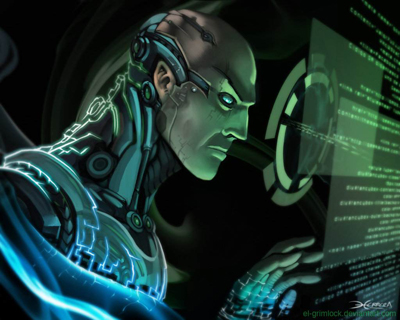 The man in the trench coat makes it obvious. “You gonna run tonight or just sit here like a piece of meat?” You reach into your bag and pull out your deck. The man’s eyes light up. “Right! Let’s make some money.”

The two thugs lead you down a hallway out a back door and into a neighboring apartment. The place is well-appointed, like a room at the W. There’s a gift basket on the table – an assortment of nuts, some chocolate mints stamped with your corp logo and a selection of fruit. On the coffee table is some sort of computer. There’s a monitor with a webcam on top and a pair of headphones. Where the keyboard ought to be there’s a camera on a stand, pointing down. Lights illuminate a Netrunner player mat. You sit down on the couch and put the headphones on. The screen flickers on. You see another player mat. In the corner of the screen you see a person slide into view. You smile. It’s somebody you know.

“We’ll be outside if you need anything,” the security guard says. “You won’t be disturbed.” The pair file out and quietly shut the door behind them.

You start shuffling your deck.

Trench coat dude leads you through the kitchen and down a set of stairs that lead to the back alley. He reaches into his pocket and pulls out a single key, which he uses to open the door to a storage area. 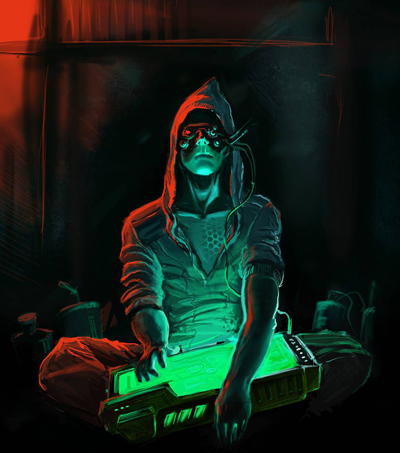 The room is bigger than a closet, but not much. At the far end you are disturbed to see a human figure sitting in a lawn chair. He is wearing a VR headset. There’s an odd device protruding rudely from his lap. “Never mind this wastoid,” your handler says. He throws a ratty blanket over the VR man’s lap and gets straight to business. “Over here.”

He points to a corner where the building’s communications wiring is – Verizon’s fiber box hangs open and jury rigged wiring appears to have been clipped, soldiered and taped into place. The hack job of cables leads to a TV table, rigged with lights and cameras. Two brackets on the back of the TV table hold a re-purposed laptop LCD. You sit down in a folding chair to get a better look at the monitor. In the corner of the screen you see the smiling face of an old friend.

It’s time, once again, to play some Netrunner.

Secret immersive Netrunner matches are just one of many things we want to do year round. If you dig that kind of thing, check out our Kickstarter campaign.  Pretension +1 is a weekly column about the intersections of life, culture and videogames. Follow Gus Mastrapa on Twitter @Triphibian.

Return to the Hi-Tide

Hellboy and the Right Hook of Doom