The writers of Earth 2 have already established that the world these heroes inhabit is really a minor inverse of the main DCU, so we’re already used to the minor changes they’ve made to the mythos. We’re aware that all of this is occurring in a parallel world. 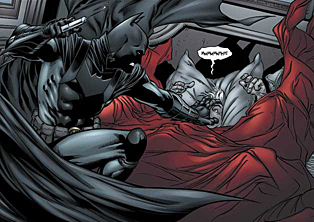 What Tom Taylor does well is really alter our perception of Bruce’s family. His parents are always depicted as victims of circumstance, the outcome of which drives their son to dress like a giant bat and fight crime. In Taylor’s world, Thomas and Martha Wayne are anything but praiseworthy, and the life they’ve built with Bruce is founded on lies and dishonor.

Where the issue misses its biggest impact is in the reveal that Bruce Wayne’s father never died. Thomas Wayne, the current Earth 2 Batman, survived being murdered by Joe Chill for reasons I won’t go into here. But when Bruce discovers this, when he finds out that his whole persona is based on a lie, the emotional impact is weakly delivered.

Granted, this isn’t all Taylor’s fault, as he only has so much space to work with, but I imagine the impact of this knowledge would severely affect Bruce. We’ve never seen that because he dies in the first issue of Earth 2. And Thomas’ reason for sharing his sordid past is flimsy. I would have preferred Taylor to keep the whole story in Thomas’ head, rather than knowing he’s spilling the beans to a group of strangers.

Even Robson Rocha’s art is lackluster. It’s serviceable, and a hell of a lot better than I could do, but it’s perfunctory and solely aimed at telling a story rather than delivering anything dynamic. That being said, his Earth 2 Batman is imposing, and the tight shots he uses at the end of the issue are where Thomas’ ferocity comes out.

Tom Taylor’s a great writer (read Injustice if you don’t believe me), but this issue doesn’t do the best job of highlighting how solid a story he can tell. This is good, but a little flat. Maybe my expectations were too high, or maybe I wanted the outcome to be different. Who knows?

But this break in the action has only stalled a story that was gaining solid momentum. I look forward to it returning to its plot next month. 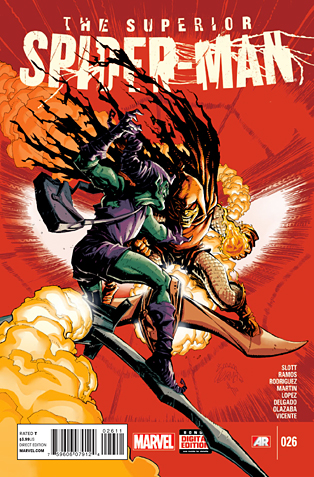 Dan Slott has a lot going on in the pages of Superior Spider-Man. Peter Parker’s spirit has survived and is looking for a way to take control of his body; Otto’s time as Spider-Man looks to be drawing to a close as the Avengers have decided to act on his odd behaviors; the Green Goblin is waging a war against Hobgoblin with New York as the battlefield.

With all of these major threads overlapping, the narrative tug is erratic, and this makes Superior Spider-Man #26 a bumpy, inconsistent read.

There are just too many big things going on for the story to ever really settle. Any one of these plots could be a singular issue (or more), so with Slott packing all of them into one comic, the issue feels rushed. It’s clear that Slott was working under a deadline to wrap up his main story before switching gears for “Goblin Nation” next month.

The Goblin story is probably the most erratic, as Humberto Ramos spends the majority of his time depicting compacted action. Many of the panels look truncated, like Ramos had to take what was going to be three panels and combine it into one.

Additionally, each thread of the issue is given its own artist, and this kind of visual disorder only elucidates the narrative disorder. It’s hard enough to fit the Avengers into a 22-page comic, but relegating them to six, broken up over the course of the story, means that much of their moments are dialogue-heavy and pretty dull. They’re basically wasted characters used to foreshadow Otto’s end as Spider-Man and raise the stakes for Peter’s return, but other than that, they fail to serve a solid purpose.

The section involving Peter’s stroll through the remnants of his memories is probably the most wasted of the issue. It’s basically three pages of Peter doing what he already did in the last issue, except this time he seems to have forgotten that he was Spider-Man. And it doesn’t add anything to the story, other than to remind us that yes, Peter is still alive (somewhat) and we’ll see him soon.

The Superior Spider-Man #26 wants to remind readers of what it’s building towards, but it only reinforces its own awkwardness. It’s clumsy and cumbersome, and the story suffers because of it. But Peter Parker returns in April, so this comic should be shedding some excess pretty soon.

Then, maybe, it will have more balance. 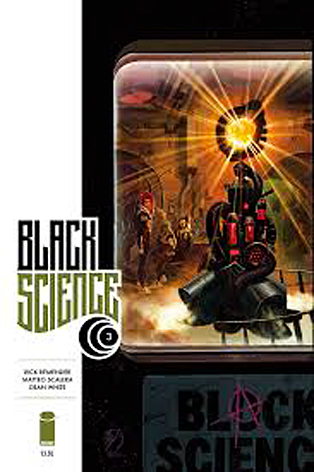 Bannen’s Book of the Week:
In this issue of Black Science, Grant uses the metaphor of an onion to describe inter-dimensional travels. He says, “each layer represents an immeasurable number of realities, each created from the choices made by every living being in the universe.” I bring this up because each issue of Black Science reads this way; Rick Remender peels back another layer of the onion to show us what lies beneath.

What we find, however, is not always good.

Where Black Science is at its best is in its characters. In this issue, they reveal a bit more about themselves – some good (like Kadir doing some pretty heroic things to help out Ward and Shawn), and some bad (like Grant’s relationship with Sara, and Sara’s violent choice to save Grant’s kids).

But the mystery of the Dimensionauts, and their unexpected trip to the parallel worlds in which we find them, is enough to keep me engaged. Someone clearly sabotaged their trip, but whom? And why? Too many of the characters could be responsible, so it’s difficult to pinpoint just one person. And Remender is good at making it so that no one person is above or below suspicion.

Matteo Scalera has some of his best work of the series in this issue. His picturesque designs are captivating, and the emoting he illustrates really brings the characters to life. Sara, in particular, runs the gamut of emotions, and each one is displayed with solid clarity. The shot of her tear-streaked face as she drowns a German soldier does more for the character than anything Remender could have her say.

At the very end of the issue, in the letters section, Remender writes “Now that we’ve spent a couple of issues getting to know our cast I can put the pedal down and drive these poor bastards over a cliff.” And really, reading Black Science is a lot like watching a car crash in slow motion. You really do feel sorry for these characters, and you want them to get home. But at the same time, you know that Remender has other things in store.

And this is where Black Science has been so successful. It’s built a world that sucks you in, given you characters in which you can believe and has crafted a story that’s so original and so brilliant that you hate yourself for not having the same ability.

In the end, though, we have Black Science. I think the tradeoff – for now – is a damn good one.