Much has been said about the Nintendo Wii as a technological breakthrough, a stroke of design genius and a marketing phenomenon. It wasn’t just a clever ad campaign that had senior citizens and adult women playing videogames for the first time in their lives. It was a conscious retooling of what a videogame could and should be; a break in the narrative of two decades which was increasingly defining electronic gaming as something arcane and separate from the broader human concept of play.

Nintendo wanted to draw on a broader range of human experiences.  With its motion controls and sensor bar the Wii created a new sort of shared space between our living rooms and the dimension implied by the glowing screen. The revolution was that anyone who had ever thrown a ball, swung a racquet, jumped or chased or skipped, now knew how to play a videogame. 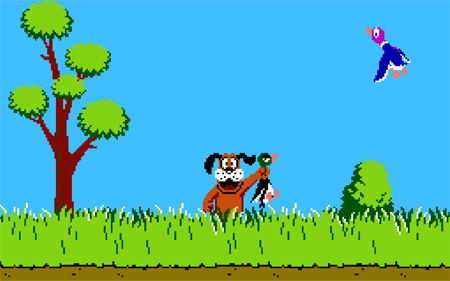 But here’s the thing, Nintendo already did this, without lasers or gyroscopes or accelerometers or even more than eight bits of memory. I’m talking about Nintendo’s 1984 creation: the NES Zapper, a plug and play light gun that just worked. And man, was it fun. Other than Tetris on Gameboy a few years later, Duck Hunt was the only game of its generation that I saw the adults in my life play on a regular basis. It proved as user-friendly and irresistible as a well-filled water pistol.

As a kid, I didn’t question the technological aspects, but setting up my new retro NES in the mancave for a round of Duck Hunt recently, I found myself wondering how the hell it does what it does. We’re talking about a peripheral from the telegraph era of gaming, where all player-game communication is mediated by blind button presses. With no sensor bar, no internal instruments in the Zapper to tell it how you’re holding or where you’re pointing it, how can the console possibly know whether you’ve properly hit a duck? This confused the heck out of me, and I’ll bet you’re confused, too.

Televisions were designed to do one thing and one thing only: accept electronic signals and translate them into audio and video for display on a screen. These signals used to be exclusively radio waves in the air picked up by antennae (the old rabbit ears), but with auxiliary input, tape players were able to interpret the meaning of a cartridge of magnetic tape and suddenly televisions could display the same type of audiovisual information on demand. 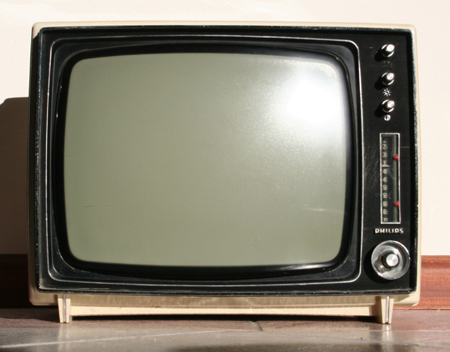 With the Nintendo Entertainment System, game cartridges contained software instructions for simulating virtual worlds on the fly. Players could interact via commands sent directly to the NES console, the specialized computer running this secret world. The television screen allowed the player to see a visual representation of what was happening in this world, but all the direct interaction occurred between the player and his console.

There’s a great scene in City Slickers where Billy Crystal’s character is trying to explain to Daniel Stern’s how to set his VCR to record a television program, particularly noting that the TV doesn’t need to be turned on while the show is being taped.

“Yes, that’s the point. You don’t even need a TV to record.”

“But how would I watch it?”

See, it’s the signal that matters, and the VCR passes on the signal to the TV, not the other way around. I remember as a kid I used to almost jump off the couch when I was trying to get Mario over a particularly imposing chasm. This may have helped me from a psychological standpoint, but the NES-run game environment knew nothing save the buttons I depressed, and when.

But the Zapper presents a weird exception. Not only is the game apparently aware of which way it’s pointing, but also the physical location of the screen itself. Somehow the television, ostensibly a device for receiving input, is engaging in a two-way communication with the player. How?

The answer is as brilliant as it is simple. The Zapper light gun has two sources of input: an active trigger button the player can depress; and a passive light detector hidden inside the barrel. The gun’s light detector (a photodiode) can determine changes in light intensity. If you’ve played Duck Hunt or other Zapper games on the NES before, you’ll have noticed that the screen flashes whenever you take a shot. But this isn’t merely a low-tech muzzle-flash effect.

Look more closely. Do you make out the little square block of white that surrounds each target? It looks a little something like a visual representation of a damage box (the way the game knows when your character and an enemy have “touched”). Of course, it’s not. It’s the signal to your Zapper that you’ve managed to point your gun the right way.

Upon pulling the trigger, the screen briefly goes black, then, just as briefly, the NES instructs the television to illuminate an area of the screen that represents the target’s present position. This is where the television screen, uniquely, acts as an input device for the NES, and not the other way around.

If you’ve properly taken sight of your target by the time you depress the trigger button, two things will happen in quick succession. The amount of light hitting the detector will drop precipitously, as the screen goes black, then quickly increase to higher than normal levels, as the patch of screen representing the target turns bright white. This fast drop and jump in light levels is the signal to the NES software environment that a successful hit has occurred, and the program obliges by signalling to the virtual duck that its time is at hand. 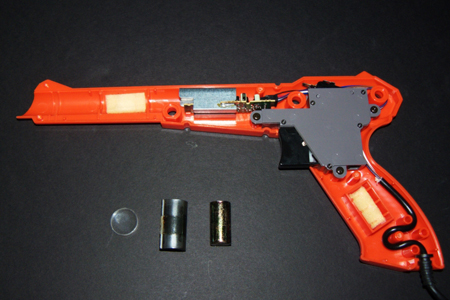 If you miss, of course, the screen will flash and remain black, and the duck will survive another round. What’s wonderful about this design is just how well it works. Two decades later, users were rearranging their living rooms to suit their Wii set-up: controls would get wonky if you stepped too close or too far from the screen, or fired at a non-optimal angle. The calculations required to translate all of this movement data into a virtual picture of the player’s actions are fiendishly complex. It couldn’t have been done on an earlier console generation.

With the Zapper, all that needs to be calculated is a brief spike in light levels, well within the abilities of the NES’s eight bits of RAM. It’s accurate because it depends on the laws of physics. If light travels in a straight line, the Zapper can be aimed accurately, no vector calculations required. If the Wii’s motion controls are akin to Segway technology, the Zapper’s design is the analogue of the third wheel. Simple, but indisputably effective.

The console can even distinguish between multiple targets by allowing each light block a different and unique flash duration. Clever, clever.

Yet light guns and analogous peripherals were largely forgotten as subsequent systems were released. Instead, Nintendo, and everyone else, demanded increasing skill and background knowledge from their players. Fluency in the conventions of the standard ABXY controller became mandatory, banishing the “casual” gamer from the consoles for 20 years (though arcades continued to embrace kinesthetic interfaces all along: realistic steering wheels, dance floors, and mallets for whacking moles).

With rare exceptions, guns, swords, tennis rackets, and drum kits would exist almost exclusively on the other side of the screen, while our grubby hands would have to communicate our intentions via timed button combinations.

Hindsight is 20/20, but it seems obvious now that the Wii, far from coming out of left field, was well overdue. To give credit where credit is due, it was and is fantastic, taking everything that was best about arcade motion gaming, and adding a few novel twists. But when I fire up Duck Hunt and carefully sight my gun on a distantly-receding clay pigeon, I’m reminded of those anonymous designers whom first treaded that territory, and just how much fun it still is to shoot a duck.