As much as I love to complain, I’ve gotta say I’d be hard-pressed to come up with many negatives about this Rookie of the Year experiment.

But perhaps there is one downside, one dark, dusty, cobwebby corner of my indoctrination into the hi-def world of next-gen gaming: I now dislike – nay, despise – my Wii.

The last time I owned a TV, back in the Stone Age, I searched high and low for Nintendo’s then-brand spanking new console – charmed by Wii Sports, the wireless controllers that could sense your movements and the promise of reliving my childhood with brand new Super Mario Bros. and Legend of Zelda games – before I finally found one, fortuitously stumbling into the Times Square Toys“R”Us minutes after the arrival of a fresh batch.

I loved it. I put hours and hours into games like Twilight Princess and Metroid Prime. I downloaded several of my all-time favorite NES and Genesis games onto it and played them to death, too. I challenged and smoked everyone from my then-girlfriend’s brother to, well, my then-girlfriend, in Wii Tennis.

And when I embarked on this project and bought a TV again and an Xbox 360, I also hooked up my Wii and figured I’d write glowing columns about it as well.

As it turns out, I got that half right.

Here is my Wii column. 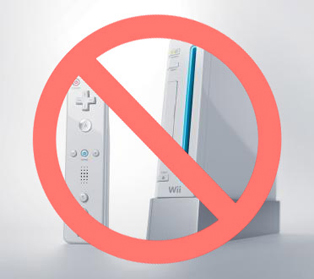 The other night, I turned my Wii on for the first time since the day I set it up (and I only turned it on then to make sure it worked). I played for roughly 3 1/2 minutes.

Everything about it sucks, but here are a few key complaints:

1. It looks like ass. Having now played gloriously gorgeous games like Fable II on my 46″ Samsung, the Wii menu alone makes me feel like I’ve plugged in some toy my sister got for my nephew.

My nephew is 9 months old.

2. Not once in all my trips to GameStop these past few months has a single Wii game caught my eye. Actually, interesting Wii games had stopped coming out, or at least were few and far between, even during the console’s heyday. The only company that makes games for the Wii that are worth a damn, at least in my estimation, is Nintendo itself. Don’t get me wrong, I had tons of fun playing Super Mario Bros. Wii when it came out – it’s the greatest game for fostering family disunity ever devised. But with my Xbox, amazingly, I can enjoy a wide range of fantastic games that do not have Italian plumbers, Samus or Link involved in them in any way.

So, now I read that the Wii U, which is coming out next year, appears to utilize some kind of tablet/remote hybrid with a second screen on it I would have to struggle to hold while I’m playing one of the few games that’ll be worth owning on a belatedly hi-def version of the Wii. Where do I sign up?

I’m sure the new Zelda game and the inevitable hi-def Super Mario Bros. will be fabulous, state of the art even now, all these years after their very first iterations back in the ’80s.

Which, in the end, makes my Wii worth it for one reason, and one reason only: I can still play NES titles on it and fondly remember a time when kick-ass video games and Nintendo were one and the same.

Matt Marrone really wants the Wii U to be awesome – because he’s almost certainly going to buy one. You can follow the Rookie of the Year, a sucker, on Twitter @thebigm.

Welcome to My Nightmare – Rise of Nightmares Reviewed