It is a commonplace that horror games draw on the stock character of the “criminally insane” to create their bogeymen and bad guys. Even reasonably uncomplicated titles, like PlayStation’s original Crash Bandicoot, had a little of that flavour: the Hammer Horror mad scientist who enjoys nothing better than genetically splicing innocent island creatures while cackling maniacally at his plans, even if this was set in a world of Wumpa fruit, floating platforms and totem poles.

For anybody who has experienced mental health problems in his or her life, what stands out is the grinding down of it, the loss of character, the reduction of your horizons and ambitions and self.

At the darker end of the wedge, however, there have been games like the recent Outlast, in which the player must survive the violence of the Mount Massive Asylum – an institution that has been violently, bloodily overtaken by its inmates. As Miles Upshur, an investigative reporter, you are unable to fight – your only choices are “to run, hide, or die.” While the game has received positive critical attention, it has also attracted understandable concerns about its exploitation of the imagination of mental health and illness. Like Thief 2‘s infamous Shalebridge Cradle, Mount Massive is a place of foreboding; its inmates are delusional, violent, horrific.

Also consider Manhunt 2 – another asylum, more violence, and again less deep engagement with what mental illness really is and can do. One reviewer stumbled over this unawares, remarking that “there’s little that is unique about the game’s setting or mechanics.” This is very true, but for me – as for many others – the normality of such a depiction is a worrying sign of how mental illness equals violent psychosis association has become so deeply entrenched that it’s unremarkable.

It’s a scenario we are familiar with from newspapers, TV and film – the subdued lighting, the black-and-white tiles spattered with blood, a gurney tilted, wheels spinning, on the floor. As we progress through these spaces, our hearts race, our paranoias and fears building steadily, sickly. In short, these environments make fine horror game settings – producing exactly the kinds of effects (fear, trepidation, anxiety) that the genre relies on. And yet, such games regurgitate a not uncommon – in fact a very popular – stereotype of mental illness: schizophrenics are dangerous and violent, unpredictable and immoral. 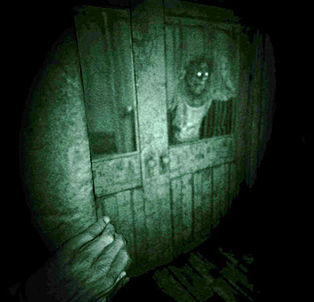 In truth, of course, mental illness is represented by a vast spectrum of conditions, experiences and manifestations. Depression – now so common – is steadily on the rise, accompanied with increased prescriptions of antidepressants and a concomitant rise in suicides (a particular group affected, here, have been young students). It is represented by things such as SAD (Seasonal Affective Disorder), bipolar (the transitions from feeling fine to feeling depressed, in more and less extreme cycles), acute anxiety, panic attacks, eating disorders. These are problems that are complex, common and poorly understood – at least by the public. And yet, many sufferers are anxious not to communicate their experiences precisely because they see the stereotype first, before everything else. It conditions our response.

Outlast is actually not a bad game – as a game. And perhaps we can even see in it a critique of the mental health system; for anybody who has visited an asylum (or inpatient facility, or ward), or met somebody who has been part of these institutions, the impression is sad and difficult. Just as Joseph Heller’s Catch-22 was a critique of war from inside the war, we could say that Mount Massive and the Shalebridge Cradle are indictments of the institutionalized mishandling of mental illness. As Garrett, the player-character of Thief 2, remarks of the Cradle, “if there’s a way to cram more misery into one building’s history, I can’t think of it.”

And so, while in most regards Outlast and Thief 2 are peddling old, worn myths, there is also a wariness, there – but perhaps a very silent and hidden one. But ultimately, it is their impression, their mythologies of mental illness, that have deeper resonances. Most reviews I have seen, whether from players or critics, do not hit on this reading. Rather, they are celebrated for their mechanics, their game worlds, their horror. The myth outlasts any genuine critique in the games. And mental illness suffers for it. 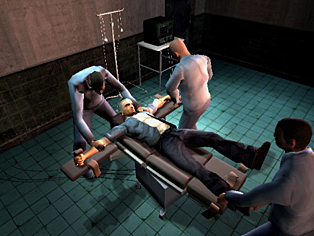 But there are other options – other ways of responding to and engaging with this issue. The big challenge, beyond exploiting and misrepresenting mental illness, has been to represent mental health in an interesting and engaging way. One of the early and brilliant pioneers has always been Tim Schafer’s Psychonauts, a platform and adventure game that put the player-character literally in the troubled minds of the people who inhabited the world. What was so successful about Psychonauts was that it built an accessible world and a fun platform experience around mental health, without ever being overly patronizing, without misrepresenting or demonising the mentally ill. In fact, nearly every character you meet in the game has a mind filled with bad memories, niggling anxieties, consuming depressions.

And yet, these are full and hearty characters, with voices and animations and a place in the world. They are worlds away from the chaotic, manic inmates (“the Variants”) of Outlast. Indeed, on the surface they seem to behave normally, albeit characteristically. It is not until you enter their minds that you realize they are coping with old sorrows, self-doubts, panic. At the same time, the game shows that mental illness can be treated (not just medicated), which presents a stark divergence from the myth that mental illness is either endless or must break in a violent, disruptive act (such as the fire that consumed the Cradle in Thief 2). True, it simplifies things – but it is first and foremost a game. Unlike Outlast, however, it is not based on misrepresentation.

Outlast is too ready to paint mental illness in broad brush strokes – to see it as violent psychosis rather than in its reality – in its commonalities, its subtleties, even its banalities. For anybody who has experienced mental health problems in his or her life, what stands out is the grinding down of it, the loss of character, the reduction of your horizons and ambitions and self. It is a slow, banal shrinking to a point – not some great, chaotic urge to do damage, to rage and destroy. It is quiet and painful and slow. 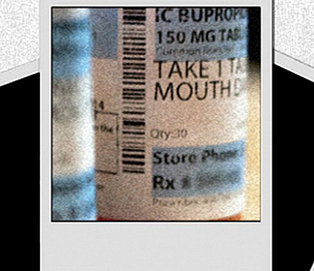 Hopefully, helpfully, some games developers have picked up on this – the real world experiences of mental health – and have attempted to build them successfully and meaningfully into a game, or at least into some sort of interactive framework.

Depression Quest, a browser-based interactive adventure game, is, despite its rawness, the best depiction of mental illness – in this case, of depression and anxiety disorder – in a game I have played so far. After reading a lengthy blurb about your character and life (in a relationship but socially isolated, holding down an undemanding but unfulfilling job, whose parents feel you are not applying yourself), the days begin to wind past, each presenting new, very ordinary experiences: an invitation to join workmates for a drink, an invitation to a party by your girlfriend, a meet-up with an old acquaintance from school. In each situation, you are presented with fewer and fewer options, each one hemmed in by the anxiety of imagining the fallout of taking this or that step. And some responses, while listed, are struck out in red and unclickable. These are the “normal” responses, the healthy responses, the ones that, because of your anxiety, are impossible to choose. In the end, your social world shrinks to a sofa, a dark room and the absorbing lull of Netflix and self-doubt.

What the developers have done so well is to make the game not only realistic in content but also in experience: the gray-scale background, the small font, the wavering ambient music each contributes to a hollow, distracted feeling. Each day, with more and more text (that is, more decisions and anxieties), the character’s life becomes harder to read. You take longer to reach decisions, you dally, you lose ambition to even complete the game at all.

To make things easier, you choose the simple options – “stay at home” , “go to sleep” – because that way the text is gone, even if only for a while. I don’t know if the developers intended this way, but the actual experience of this – the structure of the game – is a powerful evocation of the experience of depression, of its banalities, its grind, its dislocation – but also the many routes by which it can be managed and cured. And it is entirely absorbing.

Similarly, MedicationMeditation aims to convey the realities and experiences of mental health through gaming. Through its old-school 16-bit graphics, the game requires the player to manage the day-to-day, moment-to-moment actions of somebody who is dealing with mental illness. You are asked to take dosages at required times while a clock spins, to inhale and exhale with clicks in order to control your breathing, to repeat affirmative phrases. In its complexity, even despite its simple interface and graphics, the game builds a very positive and coherent picture of the manageability of mental illness.

The challenge, then, is not to eradicate horror games, but to demonstrate credibly, accessibly, that there are other ways of representing and exploring mental health. There must be ways that will actually benefit these games by filling them with more credible characters – not just its freaky and cackling bad guys and blood-spattered bogeymen, but its grindingly banal normalities, its relevance to the person on the street, its grounding in personality and identity. 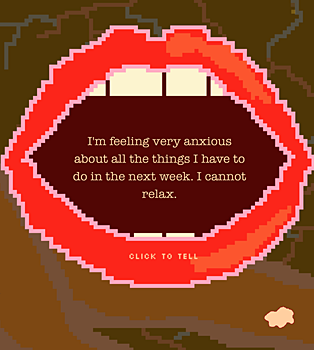 And for those who say that this won’t make good entertainment or good game design, they could do no worse than to look to how modern games have successfully engaged mental health as an experience, an atmosphere. Mass Effect, which has been written about enough already that the ink ran dry, creates a world filled with narratively complex characters – characters whose motivations extend not just a little beyond the cliché. In Mass Effect, you encounter numerous characters living in believable worlds, with believable anxieties and concerns. So, too, in Halo 4 does your AI companion – Cortana – undergo the equivalent of computational mental breakdown. As the game progresses, Cortana’s self-doubts, anxieties and loss of energy to go on prove that she is the most “human” character in the game. And even despite this, she does not crack or kill but remains positive in trying to assist her old companion, Master Chief, with his survival on an alien world. It is touching, believable and real.

And so, while Depression Quest and MedicationMeditation will not, for now, be played as consumptively and popularly as the bigger titles, they point toward new avenues and shadings by which game developers can learn to see mental health in its normality, processes and personality. Such developments will not mean that games stop being entertaining, but they will make them more realistic and more credible in an age where games are increasingly attempting to build coherent and believable worlds.

For once, it would be good to have coherent and believable characters to inhabit them.

Assassin’s Creed: The Fall Rises to the Occasion
Previous Post

A Communique from République