There’s been increasing talk about mental health among the gaming community lately. And I’m not talking about people outside the community blaming violent videogames for all the bad things that happen in the world. Rather, I’m referring to actual discussions among gamers about how things like depression, anxiety and other mental illnesses affect their daily lives. As the conversation grows and the topic becomes less of a taboo, more people are revealing that they have experienced mental health issues during at least one point in their lives.

All of this is culminating into something I’ve been saying all along: almost every gamer has experienced, at the very least, anxiety and/or depression.

It’s not surprising. Gamers in general have a reputation for being “socially awkward.” This is, in actuality, soft language used to describe social anxiety. In fact, many of our community leaders have admitted to dealing with anxiety that has affected their ability to relate to others – most notably, Mike Krahulik of Penny Arcade.

In accordance with the trend, gaming blog “Good Games Writing” took to Twitter to participate in the #BellLetsTalk hashtag event, which raised money for mental health initiatives with each tweet that included the hashtag on January 28th, 2014. Put on by the Canadian Mental Health Association, the event was meant to raise awareness and reduce the stigma. In this spirit, “Good Games Writing” held a discussion with their Twitter followers about how they’ve been affected by mental illness, how videogames have helped them with that, and how videogames handle the subject. 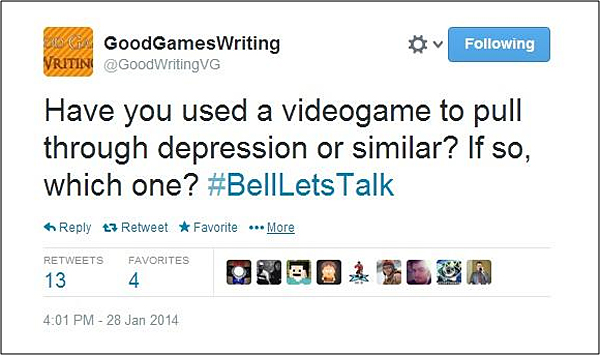 Many respondents reported that they’d leaned on videogames during difficult periods in their lives, especially when dealing with loss and/or depression. They talked about using videogames as a distraction, an outlet for negative emotions or for anxiety-based mental illness as a way to focus and channel nervous energy. Some mentioned that the ability to immerse themselves in a story was comforting.

In a telling move, “Good Games Writing” moved on to a discussion about relating to characters. 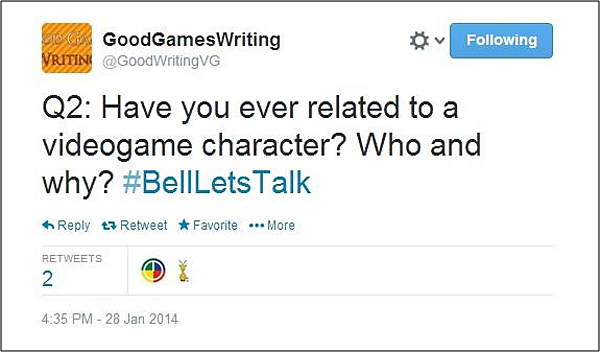 People with mental illness are often drawn to stories. Being able to relate to characters and their conflicts and see those characters pull through does wonders for anyone going through a troubling period – it validates their thoughts and emotions, working to break the deep feelings of isolation and loneliness that can lead to or worsen depression and anxiety. Videogames, with their unique ability to create a deeper layer of immersion through gameplay, can be particularly effective in this comforting function. 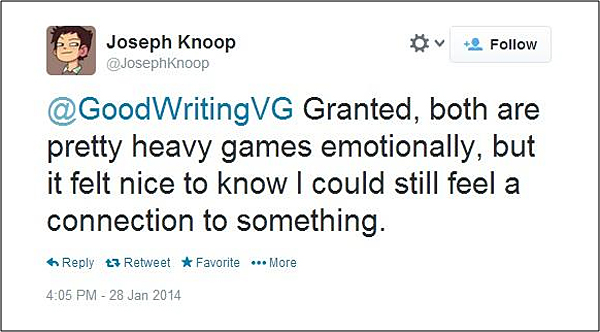 Later, “Good Games Writing” asked their followers about the stigma they’ve dealt with surrounding their personal mental health issues. Respondents cited a culture of silence, misunderstanding and isolation when it came to things like depression and addiction.

One of the final questions posed by “Good Games Writing,” and the one that stood out the most to me, was their question about how videogames approach the subject of mental illness. Maybe I shouldn’t have been surprised, but it struck me when I realized that, aside from Depression Quest (which someone had already named), I couldn’t think of a single game that outright names and deals with mental illness in any way that doesn’t make the stigma worse. And neither could anyone else. 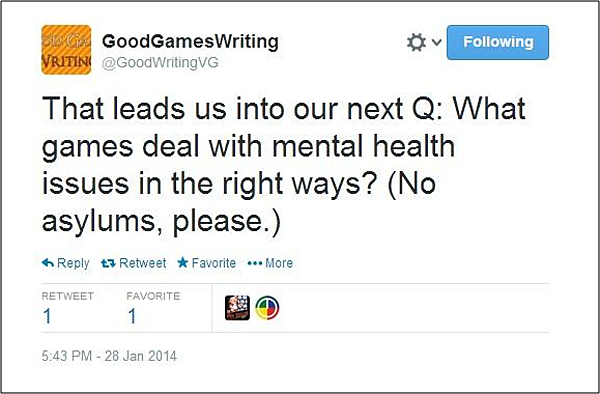 As Owen Vince recently pointed out in his piece on the subject, “Mind Games,” most games that feature any kind of mental illness use harmful stereotypes about schizophrenia and antisocial personality disorder to create horrifyingly violent villains that need to be killed, or, at best, locked up forever. Obviously, developers could do much better. Depression Quest can be held up as a shining example – the developers of this game have received many rave reviews from people (including myself) who have experienced depression for its accuracy and emotional effectiveness.

Of course, there are plenty of games that feature hints of mental illness in protagonists or redeemable characters, but the illness itself is rarely named. Being able to speak frankly about psychological disorders and their symptoms is the key to ending stigma, and it helps the people affected tremendously through the simple function of letting them know that these issues are not uncommon and they’re not bad people for having them. 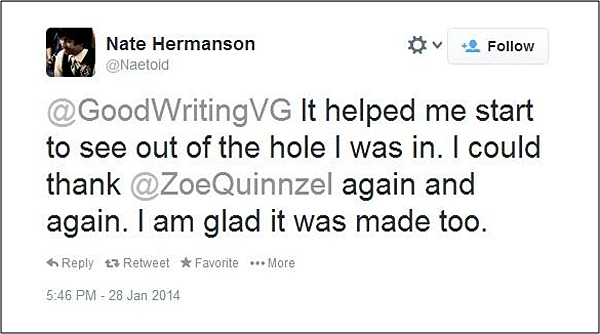 These are all good reasons for more and bigger developers to start making games that follow the example of Depression Quest and jump on the “Let’s Actually Talk about Mental Illness” bandwagon. But a better reason, at least to those who are concerned about profits (this is about you, every AAA videogame developer in existence), is that gamers are drawn to stories that they can relate to and that make them feel less isolated. Since it seems as though so many gamers have experienced some level of mental illness, whether it be full-blown diagnosed disorders or bouts of depression (both equally valid problems), and we’ve established that said gamers are drawn to games that deal with mental illness in the right ways, it stands to reason that making videogames that would reduce the stigma and increase conversation about mental illness would equal big fat sacks of money.

And if helping the majority of a population out isn’t good enough reason to put some effort into destigmatizing mental illness, maybe those big fat sacks will be. Either way, videogame developers should be encouraged to make games that directly address the issue, and gamers should be the ones doing the encouraging. Our favorite games are the ones that we can relate to, and the ones that have made us feel the best, for whatever reason. Addressing mental health = better games. Best math ever.

This War of Mine Needs A Lesson In Depression
Previous Post