It’s official: Wonder Woman will make her live action movie debut in the 2015 as-yet-unnamed sequel to Man of Steel.

What role the character will play in the film, which also introduces a new Batman as well as Man of Steel‘s Superman, remains to be seen. Will the movie be a Superman/Batman story in which Wonder Woman plays a minor role? Will it be a Trinity story (as the three heroes are often called) in which all three get equal billing? Or, as some have suspected, is the unnamed 2015 movie a Justice League story that will also introduce the characters Green Arrow and The Flash, as established on the TV show Arrow? 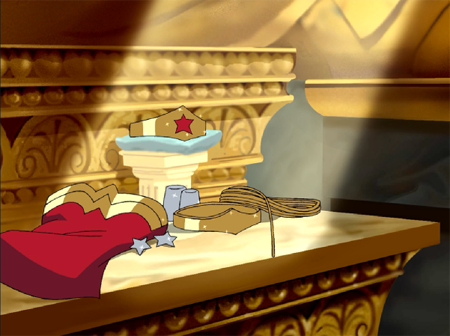 We can only guess the full scope of the 2015 movie. All we do know is that it will feature Wonder Woman, and thus will have to introduce her to the audience. In some sense this will be easy: Despite never having been in a movie of her own, Wonder Woman has always been one of the few comic book superheroes whose name is known even outside the comic book fanbase. Like Superman and Batman, she is a pop culture icon; people don’t have to know that her real name is Diana or that she grew up on a Greek island to recognize that red, blue and gold suit.

But a lot of people, including representatives of DC Comics themselves, believe that Wonder Woman is a “tricky” character to bring into a movie. It’s true that her origin story isn’t as well known as Batman’s or Superman’s – though that’s in part due to the fact that Wonder Woman has never been in a live-action movie before.  As her first cinematic appearance, the 2015 movie will have to take the time to explain where Wonder Woman is from and why she’s a superhero.

In the comics, Wonder Woman’s superhero origins have changed slightly over the years, though no more than Superman or Batman’s have since their debuts more than 75 years ago. In Wonder Woman’s original Golden Age incarnation by William Moulton Marston in 1941, the Amazons are all-female warriors who fought and defeated the all-male armies of Hercules, but then graciously refrained from conquering the world and instead isolated themselves on Paradise Island. There the queen, Hippolyta, formed the figure of a child out of clay, and the gods brought it to life, thus creating Diana.

After DC Comics rebooted their superhero universe in the 1980s with the “Crisis on Infinite Earths” storyline, the Modern Age Amazons are the reincarnated souls of every woman ever murdered by a man, including Diana, although her formed-from-clay birth remains. And in publisher DC Comics’ currently ongoing New 52 series,  Diana is the natural-born daughter of Hippolyta and the Greek god Zeus.

Diana’s motivations for becoming Wonder Woman have also shifted subtly over the years. In the Golden Age her purpose is to bring “peace and love” to mankind.  The fact that a handsome American pilot named Steve Trevor crash-landed on Paradise Island while defending the free world against Nazis also helped get Diana off the island and into the red, blue and gold. In other retellings, Wonder Woman is portrayed as the bridge to reunite the Amazons with the rest of Earth’s people. Sometimes the Amazonian island of Themiscyra comes under attack, forcing Diana to leave home to combat the threat. Sometimes simple curiosity, or a desire to prove herself in battle, play into Diana’s decision to leave her home.

These varying origins make Wonder Woman a different type of character than Batman and Superman, but they don’t make her any trickier to write. Rather, the 2015 movie’s creative team has a lot of options from which to pick and choose. The one really tricky thing about putting Wonder Woman in a Man of Steel sequel—or any contemporary superhero movie, for that matter—is because unlike the other heroes we’ve seen onscreen, Wonder Woman’s backstory and powers are largely dependent on magic. Her people are the Amazons, the legendary Greek warrior-women blessed by the Gods. Diana’s power comes from the goddess Hera and the magical weapons and armor she bears. 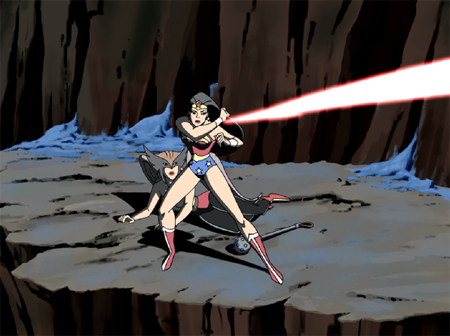 In the comics, no one bats an eye at the idea of a magically-powered superwoman flying next to an alien and a non-powered high-tech vigilante. Every single superhero movie in the last 20 years, however, has gone to great lengths to rationalize their characters’ powers as science. Even the 2011 Thor movie, whose main character is in terms of origin, powers and disposition basically Marvel’s Wonder Woman, went out of its way to assure viewers that Thor and the Asgardians are other-dimensional beings with highly advanced technology and NOT magical or godly. In 2013’s Thor sequel, a whole scene is devoted to Jane Foster explaining Asgard’s wonders using pseudo-scientific jargon.

It’s clear that the folks behind today’s superhero films don’t think their audiences will put up with the idea of magically-powered superheroes. Whether that’s true or not is a different discussion, but avoiding magic is a particular problem for DC Comics, as they have more magic-based superheroes than Marvel does. I think it’s likely that the 2015 movie will try to find a way to reboot Wonder Woman’s origins in a way that doesn’t include Greek gods or magical powers. This isn’t as difficult as it sounds. Science fiction writer Arthur C. Clarke famously wrote that “any sufficiently advanced technology is indistinguishable from magic.” A person or people being seen as magical or godlike by a less advanced group is a common trope in science fiction. Perhaps the Amazon civilization developed faster in isolation than that of the rest of the world. This is another fairly common trope in science fiction stories, but it’s not a very good one, since real-life history teaches us that progress most often comes from an exchange of ideas, not isolation.

Another possibility is that Wonder Woman’s people might be another alien or part-alien race who came to earth thousands of years ago and whom the ancient Greeks perceived as gods and superhuman warriors (Thor did the exact same thing with the Scandinavian peoples and Norse gods). Man of Steel already introduced us to one group of super-advanced aliens who arrived on Earth thousands of years ago: the scout ship that Clark/Kal-El finds at the North Pole was Kryptonian – and while at least one of its passengers didn’t survive the landing, another of its stasis pods was open, suggesting that Kryptonians have been on Earth for millenia. What if the Amazons are part Kryptonian? That would explain Diana’s strength and flight as well as her “magical” weapons and armor. This is a crazy theory, to be sure, but it’s likely that the open pod in the Kryptonian scout vessel will be significant in some way. It would be easy for the writers of the 2015 movie to use it as a “scientific” way to explain Diana’s powers.

Once Wonder Woman’s backstory in the film’s universe is explained, the next thing is to figure out how to bring her from Themiscyra to the outside world – i.e. into the film’s narrative. Structurally, there are two ways this could happen: Wonder Woman could be “pushed” into the narrative, or she could be “pulled.” You can visualize the difference like this: when something is pushed toward you, you see the thing being pushed before you see the thing doing the pushing. A “push” narrative for Wonder Woman would mean the narrative introduces us to Wonder Woman and then shows us a force that will “push” her into the main plot. If something is being pulled toward you, you see the thing doing the pulling before you see what is pulled. In that case, the audience would see the main plot – be it Lex Luthor, another alien invasion or some other global threat – before Wonder Woman is pulled into the story as well. 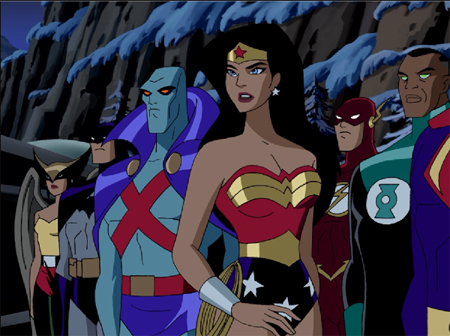 It’s more likely the 2015 film will feature a “pull” narrative for Wonder Woman. With at least three main heroes (Wonder Woman, Superman, Batman) to juggle – two of which need some kind of introduction to the audience – there probably won’t be time to go to Themiscyra. The movie was first announced as a sequel to 2013’s Man of Steel, so it will probably start with Superman and the new threat he faces, a threat which then pulls Wonder Woman out of Themiscyra to Metropolis or Gotham or wherever the action takes place.

The 2001 TV show Justice League used this type of narrative to introduce its version of Wonder Woman. In the show’s first episode, “Secret Origins,” the world’s superheroes are forced to work together when a massive alien invasion threatens the planet. Meanwhile on Themiscyra, Diana observes the danger,  but her mother Queen Hippolyta says not to worry, as “the gods will protect us.” Diana is both upset at her mother’s dismissal of the rest of the world, and dubious of Themiscyra’s safety. “I hope you’re right,” she says.

In a later scene, Diana sneaks into a temple on Themiscyra to steal a set of magic armor and weapons.  Finally, when the other heroes appear to be losing a fight to the aliens, Diana appears in the armor and turns the tide. “Who’s the rookie in the tiara?” Green Lantern asks. Diana explains that she is an Amazon warrior and has come to help them.  “Themiscyra is protected by the gods, but I could not idly stand by while the rest of the world was in danger,” she tells them. The other heroes give her the “rookie” treatment a for a bit, but it quickly passes, and by the time the final showdown rolls around Diana is as much a part of the team as the others are.

And there you go! With just two brief solo scenes intercut with the main plot, Justice League explained Wonder Woman’s origin, introduced her caring but aggressive personality and “pulled” her into its already established narrative. If the 2015 movie doesn’t have a lot of time to introduce Wonder Woman, the Justice League method is the way to go. All the movie needs to implement this introduction is a global crisis detectable from the Amazons’ isolated island.  Judging from director Zack Snyder’s previous work, large-scale destruction is not a problem.  Just destroy a few more cities, and Wonder Woman won’t be far behind!

Rookie of the Year: 365 Days Of Summer