Fans of Superman should be clamoring for this book.

Action Comics has everything in it that makes Superman great. Pak loads the book with action, character and humor. The plot is outlandishly entertaining: Superman shows up to save Lana Lang and fight a giant beast, while some sort of phasing villain looks on, waiting for his chance to test Superman. 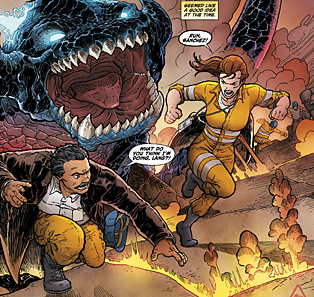 What follows is a sharply-written tale that helps Action Comics live up to its promise. Pak deftly switches between Lana and Clark’s thoughts, using their connection as a way to show both the human and heroic side of the story. Pak also makes sure to show how clever Superman can be when he seems bested. Obviously he relies on his powers, but he does so in a clever way that illustrates his resourcefulness.

Furthermore, the dual narrative is an extremely clever idea. Lana, like Lois, finds herself in situations where she’s fighting for her life. She’s also tenacious and fearless. But the difference is in Lana and Clark’s relationship. She’s like an old buddy, and not someone over whom he fawns. Plus, Lana knowing Clark’s secrete ensures we won’t have the overused moments where Clark is always disappearing when Superman shows up.

It’s like Greg Pak is taking everything people disliked about Superman and dismantling it, make the comic and the character much more enjoyable.

And Aaron Kuder’s art is fantastic. It’s reminiscent of Frank Quitely, as characters have soft features and the illustrations are clean and polished. Kuder’s pacing is solid, making the comic a fluid read from beginning to end, and his creature designs are very cool. The monster Clark fights is rendered with impressive clarity.

After a string of revolving door writers, I hope that Action Comics has found its new captain. Pak captures everything people love about Superman and funnels it into a stellar issue, leaving a very promising path in its wake. Color me cautiously optimistic but very excited. 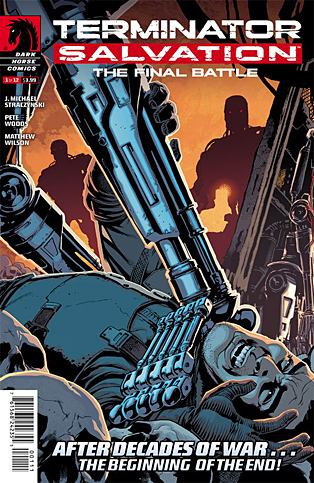 I’m not as well versed in my Terminator mythos as other people, so this review is by someone who’s seen the first two Terminator movies, and part of Terminator: Salvation. I apologize if my naiveté fails to capture the nuanced elements of the story.

My understanding of Terminator Salvation: The Final Battle is that Dark Horse is looking to close out the previous Terminator movies while adapting a new mythos for a new set of movies that will focus on the battle between humanity and Skynet. So using J. Michael Straczynski as the series writer seems like a smart idea, as JMS is definitely a big picture guy and no stranger to science fiction.

The story is ultimately very familiar. Killer robot androids travel back in time, naked, violent and stealing clothes. This is nothing new. But parts of JMS’ story work very well, particularly his serial killer on the loose and the doctor working with the robots to help them defeat the humans.

These two stories are what is most engaging about The Final Battle, because their role in the entire story is so vague. The serial killer seems to have something to do with a new version of a Terminator robot hinted at in the comic, and the doctor seems to have made some deal with the machines. But other than that, I have no clue how they’ll develop over the course of the entire 12 issues.

Pete Woods provides sharp visuals for the comic, particularly in his character designs, which are occasionally reminiscent of Stuart Immonen in both their lush inks and glossy lighting. The book is definitely easy on the eyes, and I have no doubt Woods can deliver when the action hits.

As an introductory issue, Terminator Salvation: The Final Battle is pretty base. It doesn’t reach past the established norms, even if it does create some interesting threads. This may be a slow burn series, but hopefully it catches fire soon. The series has promise, but will readers have the patience? 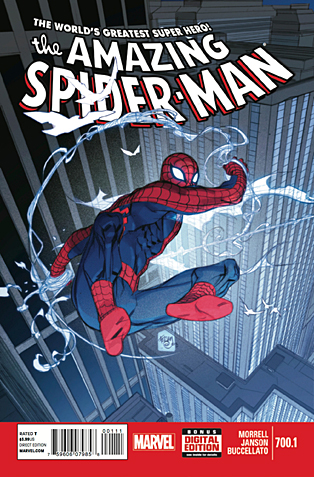 Bannen’s Book of the Week:
Seeing Peter Parker – the real Peter Parker – back in action is not what makes Amazing Spider-Man #700.1 a must read this week.

It’s David Morrell’s haunting and emotional story of a man losing faith in his cause when the people around him need his help most.

I was entranced by Morrell’s writing. The issue starts by reaffirming everything that makes Spider-Man great. He’s New York’s champion; he stands up for those who can’t help themselves and he does it without asking anything in return. Then he returns to his humble abode and does it all over again.

But what if he decided that he wasn’t making an impact? And that his efforts really weren’t worth his time? Couple this with a severe winter storm and you have a mood-heavy issue that tonally captures Peter’s desolation.

As a reader, I felt Peter’s sadness was palpable. While the story may not return Peter Parker to his glory days, nor wash off the Otto Octavius stink, it reminds us that Peter’s humanity is what makes him such a likable hero. He’s the everyman; the guy who takes it on the chin and always finds a way to bounce back.

Except this time, and that’s what made me like the comic so much. I want to root for Peter. I want him to be reminded of his place in the world, because so many of us need the reminder – even if it’s a simple one – that yes, we do matter. And David Morrell is doing just that with his mournful take on the character.

Klaus Janson’s art is every bit as tight as it should be. His style is simple and often unadorned, but it’s detailed at the same time. The shots of a snowy New York are damn near perfect, and the city comes alive in Janson’s hands. The hollow yellow of sodium arc lamps is rendered with such clarity that I had flashbacks of my childhood in New York – which made me grateful to live in Maine and heartbroken at the same time, missing my old stomping grounds.

I know this issue may turn people off due to how glum and despondent it is, but I loved it. Morrell really brings Peter’s melancholy to life, and I sympathized wholly with him. I’m sure Peter will bounce back eventually, but watching him struggle is going to be painful because any Amazing Spider-Man fan has seen the guy take beatings before. This kind of fight, though, is not an easy one to win.